Children’s Hospital Los Angeles houses one of California’s largest Extracorporeal Membrane Oxygenation (ECMO) programs. Initiated in 1987, the ECMO program has supported more than 1,280 newborns with ECMO. The program has remained the largest referral center in Southern California and surrounding states for the treatment of neonatal conditions requiring ECMO support. This extracorporeal life support system is a modified heart-lung bypass machine takes over circulatory and respiratory functions in infants whose systems fail due to underlying acquired or congenital conditions. ECMO, considered a “last resort” treatment, improves the chances for survival, in many cases up to 80 percent.

ECMO is a life-saving surgical and medical treatment for neonates with: 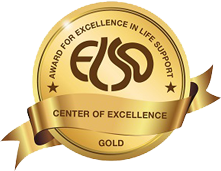 The CHLA ECMO program is the recipient of the Extracorporeal Life Support Organization (ESLO) Award for Center of Excellence – Gold Level for having processes, procedures and systems in place that promote excellence and exceptional care in extracorporeal membrane oxygenation.

Due to the complexity of the technique and the severity of the condition of the babies requiring ECMO support, Infants are cared by for a registered nurse specializing in neonatal care and by an ECMO specialist, both of whom remain at the bedside of infants receiving ECMO at all times. These specialists work under the close supervision of the neonatologists, pediatric surgeons and neonatal and surgical fellows.