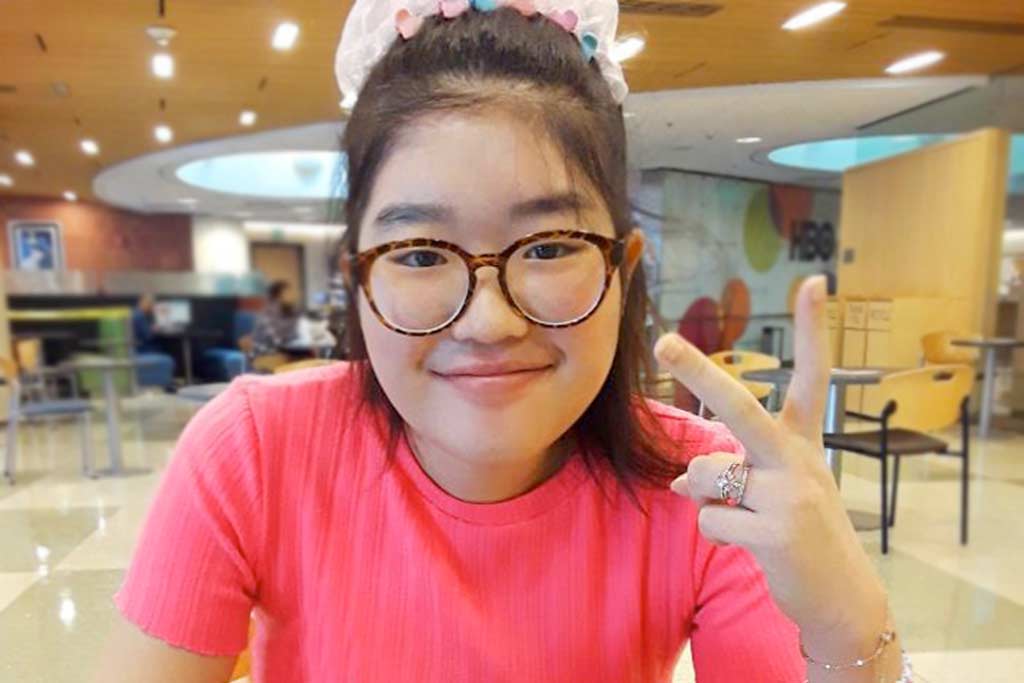 Charlize at the HBO Café at Children’s Hospital Los Angeles on the day of her discharge.

When a teenager’s mild infection turns dire, a series of lifesaving procedures and two new working organs are needed.

At 1 a.m. on March 31, 2020, John Cleveland, MD, a cardiothoracic surgeon at Children’s Hospital Los Angeles, walked out of an operating-room drama that could have been lifted from a “Grey’s Anatomy” script.

He had been in the OR for 10 hours, finishing a surgery that was expected to last less than a third of that time. He had set out to install a left ventricular assist device, or LVAD, into the chest of 16-year-old Charlize, whose heart, decimated by an inflammatory condition called myocarditis, needed the machinery to help it pump blood through her body.

Charlize had been in the hospital since mid-February, arriving with persistent breathing difficulties that her pediatrician advised her mother, Kristie, required a deeper look. At CHLA, an echocardiogram showed Charlize’s heart function was dwindling, “a tenth of what it should have been,” Dr. Cleveland says.

The next month and a half were spent vigorously treating Charlize’s heart with steroids, trying to reduce inflammation that would not relent. Dr. Cleveland, together with cardiologist Jondavid Menteer, MD, knew Charlize needed a heart transplant, so on that final day of March the task was to create a bridge to keep her deteriorated heart going, extending her life until a heart donor could be found.

At the outset of the surgery to implant the LVAD, the effect of the high doses of steroids that Charlize had taken was apparent. “High-dose steroids make your tissues very weak,” Dr. Cleveland says, “almost like tissue paper.” Hers felt like butter, he says, so the risk of a tear was heightened. Because of the perilous state of Charlize’s heart, though, abandoning the procedure wasn’t possible. 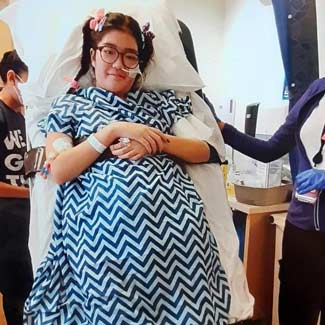 A therapist raises Charlize’s hospital bed to vertical to allow Charlize to exercise her legs.

“She didn’t have any other options. If we had stopped then, she would’ve died.”

When Dr. Cleveland installed the LVAD it worked as intended, raising Charlize’s blood pressure to a proper level, but her thinned heart tissue couldn’t withstand the increase in pressure, and her aorta ruptured. He would have to stop the bleeding to save Charlize’s life. Within moments he and his team adapted, putting Charlize into deep hypothermic circulatory arrest. This cooled her body down to a temperature that allowed him to turn off all blood circulation so he could fix the tear in her artery wall.

“She was ice-cold,” he says. “She had no blood flowing. She was on no machine to support her. Her heart wasn't beating so we could get to the area that was torn on the aorta. It was her only chance.”

Dr. Cleveland had 45 minutes to mend the aorta before the lack of blood flow would cause permanent brain damage. He was able to repair the aorta in 20 minutes and get Charlize’s blood flowing to her brain again.

“These are the kinds of cases TV stories are based on,” he says. “There aren’t many times as a surgeon that you are in the operating room wondering if you're going to make it out with an alive patient. Charlize was one of those cases.”

But what Dr. Cleveland couldn’t know for a couple of days, when Charlize would be awake and stable, was whether there would be consequences from the circulatory arrest. Thankfully, he had reason for optimism: Charlize’s brain scan looked good—and he’d had an encouraging moment at her bedside.

“When I was checking on her, she woke up and made eye contact with me. I asked her if she was in pain and she shook her head ‘No,’ and that was the first time I knew she was going to be all right.”

Charlize had been a regular kid, healthy, entering her second semester of 10th grade in the fall of 2019. She liked arts and crafts, loved to read, and was a terrific writer and a first-rate baker. (“I make a good banana bread,” she says.)

A few months later, in early February, she had a sore throat that a course of antibiotics seemed to handle, but soon afterward she began to have trouble breathing, especially when lying flat. She had taken to sleeping seated on the sofa.

Tests at the local hospital found only an elevated heart rate, so Kristie brought Charlize to CHLA expecting a quick outpatient visit.

“I wasn't really scared or anything,” she says. “I was thinking it's a minor thing where she just needed medication. Then the heart transplant doctor began coming by.”

A biopsy of the heart revealed severe myocarditis, usually caused by a virus. Like many viral infections, myocarditis doesn’t have a cure, but usually after a brief bout of chest pain and shortness of breath, the body clears it. “Most myocarditis infections are mild,” Dr. Menteer says. “Hers just kept on going.”

Two weeks after the diagnosis, Charlize was put on extracorporeal membrane oxygenation (ECMO), a life-support machine that performs the work of the heart and lungs when the patient’s own organs are too weak to do it themselves.

“I was shocked because I had no idea she was that sick,” Kristie says. “All the medical terms and all the things they were doing, even though they would explain them to me, I was scared. I was scared and devastated.”

Once off ECMO, Charlize’s heart began to fail again, Dr. Menteer says. “We all realized this was a girl who needed a heart transplant.”

Make it a double

The LVAD surgery was, in fact, the second procedure undertaken to keep Charlize’s heart functioning until it could be replaced. Three days earlier, concerned over a possible infection, which would be fatal if it crept into a new device, doctors tried an in-between, less invasive step. They inserted an Impella, a tubular pump that enters through the leg and runs up to and across the heart to help propel blood flow.

“It's meant to support somebody from a couple of hours to a couple of days,” Dr. Menteer says, “until we knew there was no infection.”

It did its job, but it also brought more harm to Charlize’s kidneys, which were already hurting from weeks of insufficient blood supply. In the process of drawing in blood from one side of the heart and then shooting it out the other, the Impella “blenderizes” the red blood cells, breaking them apart like ice cubes in a blender, Dr. Menteer says. “They go into this thing and the pump just chews them up,” he says.

The bits of broken-up cells get into the bloodstream and jam up and disable the kidneys, which can’t filter them out. The additional damage led the nephrologist brought onto the case, Rachel Lestz, MD, to decide that Charlize would also need a kidney transplant.

A key consideration that tipped the decision was research demonstrating that at the time they receive a heart transplant, patients like Charlize—requiring dialysis because of declining kidney function—have better results when a kidney transplant is performed simultaneously. Dr. Lestz explains that damaged kidneys have trouble handling an influx of fluid and may be unable to release it through urine.

“All that fluid sitting in your body is going to impede the function of your new heart,” she says. “You have a patient whose kidneys had taken multiple hits. This surgery was going to be another one on top of that. To expect her kidneys to function immediately after a heart transplant, which is what a new heart needs, was completely unrealistic. And we wanted to enhance any chance of success Charlize was going to have.”

Meanwhile, the coronavirus pandemic was starting to swell in the U.S., but if an international plague can be the smallest of one’s concerns, so it was for Kristie.

“I didn’t really worry about it,” she says. “I was worried about Charlize so much, it didn’t really hit me until I went to the grocery store and saw huge lines. That was scary. I felt much safer at the hospital than outside.” 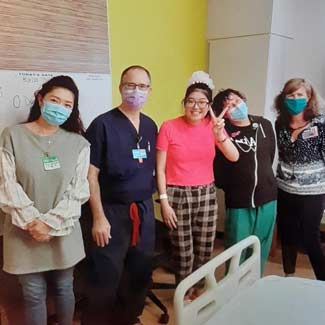 Charlize (center) on the day of her discharge, with her mom (far left) and Dr. Menteer and two nurses.

On April 28, hardly a month after Charlize was listed for a transplant, Kristie got word that a donor had been found. Charlize’s dire condition, along with her age and size, had placed her at the head of the donor recipient list.

“The sicker you are, the higher on the list you go,” says Dr. Menteer, Medical Director of CHLA’s Heart Transplant Program, “and Charlize was one of the sickest patients in the country at that time waiting for a heart transplant. Pediatric patients who are her size, an adult size, they get preference both on the adult list and the pediatric list. She had the best chance of getting a heart out of anybody in the country. Then, because she got the heart offer, she also got the kidney offer.”

The two operations were scheduled back-to-back over two days, April 29-30. Dr. Cleveland would go first, and then roughly six hours later, once he had Charlize out of surgery and stabilized, hand her off to Kambiz Etesami, MD, Surgical Director of Kidney Transplantation at CHLA. Her stability was essential to the success of the second transplant.

“If you're unstable,” Dr. Cleveland says, “your body's tendency is to not give the kidneys blood flow, if it needs to give it somewhere else.”

“The way we timed the beginning of her operation and the end of it,” Dr. Cleveland says, “everything flowed together just right.”

Now months since Charlize’s two surgeries, it can be said confidently that this second stage of her journey should be far less harrowing than the first—and if she takes her medication, Dr. Menteer says, several decades longer.

“The real question is how long this heart is going to last her,” he says. “I have patients in their 30s after pediatric heart transplant who have absolutely no heart problems.”

“I saw her echo today and she has normal cardiac function,” Dr. Cleveland says, altogether different from the disease he saw before the transplant, the extent of which astounded him after he received the initial pathology report. “I have never seen somebody who had such bad myocarditis. Even at the time of her transplant, despite the most aggressive drugs and therapies we could possibly use, she still had raging inflammation in her heart.”

Dr. Menteer says the same. It’s rare he sees that level of disease. “Over and over again her heart was demonstrating that it was failing in every way,” he says, noting that each action taken, from ECMO to multiple ventricular assist devices and finally to transplant, was lifesaving. “She really did survive an incredible saga. But now she's thriving.”

Charlize is still receiving therapy for several deficits resulting from her long hospitalization. Eating, speaking, walking—all are being relearned after months of having her food transmitted through a tube inserted in her nose, and her voice shut off by another placed in her airway. Her body bears every puncture and intervention performed on it.

“I always liked putting on skirts and crop tops,” she says. “With all the scars, it limited what I wanted to wear. It wouldn't look good if I wore a dress with a scar on my chest. But people were telling me, ‘Don't be ashamed of your scars. It makes you who you are and shows what you've been through.’ So I embrace it. I'm wearing a skirt right now.”