Born With a Hole in Her Diaphragm, Magnolia Hope Is Thriving 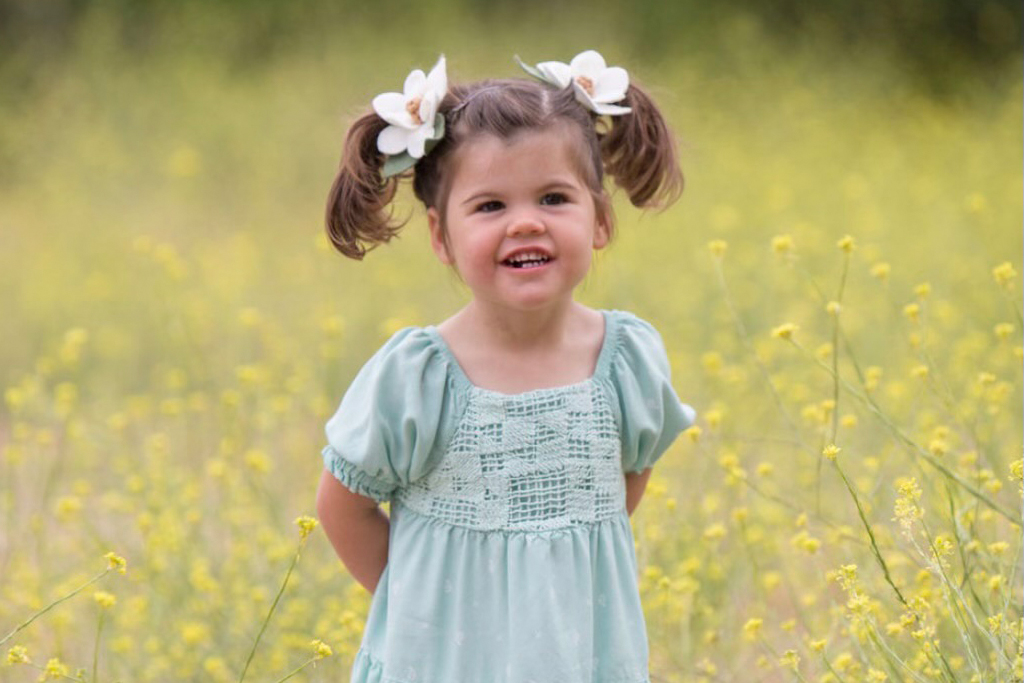 Thanks to experts at Children's Hospital Los Angeles, the toddler overcame tough odds after being born with a life-threatening congenital diaphragmatic hernia.

In many ways, Magnolia Hope is a typical toddler. She loves to play with her big sister, run around outdoors and sing at every opportunity. “Wheels on the Bus” and “If You’re Happy and You Know It Clap Your Hands” are her current favorites—especially when her dad, Cameron, accompanies her on guitar.

“It’s pretty ironic,” her mom, Laren, says, “considering how weak and underdeveloped Maggie’s lungs were. Whenever a song comes on, she just belts it out!”

You’d never know that Maggie was born with a life-threatening condition called congenital diaphragmatic hernia (CDH). In basic terms, a hernia is a hole, and the diaphragm is a delicate sheet of muscle that creates a separation between the abdomen and the chest. It also plays an important role in healthy lung function.

When Maggie was in utero, doctors discovered that her diaphragm was not developing properly. Because babies with CDH have small lungs and small blood vessels within the lungs, they struggle to get adequate oxygen. This meant that after birth, she would likely need support for her lungs to survive—and then would have to undergo surgery to repair the hernia when she was strong enough.

That early diagnosis was key because Laren and Cameron had time to prepare.

“Our OB-GYN mentioned terminating the pregnancy as an option, but we decided to carry on,” Laren recalls. “And we decided to name her Magnolia Hope because hope was really all we had—hope that the hernia wouldn’t get so big that it would destroy her.”

Moving closer to the best care

Laren’s pregnancy progressed without additional complications. As the due date approached, she and Cameron moved from their Orange County home to L.A. They knew if their baby needed specialized life support, Children’s Hospital Los Angeles was the only hospital with the expertise to give her the best chance at survival.

And so, in June 2018, just down the street from Children’s Hospital, Maggie Hope entered the world.

“You expect to hear your baby crying,” says Laren, “but I remember it was dead silent, eerie. Maggie wasn’t breathing. They let me look at her for a second but I couldn’t hold her. She was immediately taken away and intubated. That was just the most terrifying moment of our lives.”

Three days later, Maggie was transferred to the Steven & Alexandra Cohen Foundation Newborn and Infant Critical Care Unit (NICCU) at Children’s Hospital with a diagnosis of pulmonary hypertension, or high blood pressure in the lungs. A team of specialists with expertise in CDH, led by Rachel Chapman, MD, Medical Director of the NICCU and Associate Chief, Division of Neonatology, began treating Maggie’s pulmonary hypertension so that she would be stable enough for the hernia repair.

For about a week, “it was really touch and go,” Laren recalls. “We were all constantly watching her oxygen levels and hoping she’d improve.” 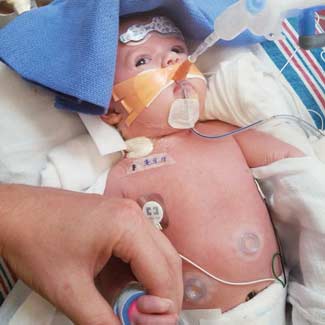 “We tried to support her lungs and lower the blood pressure in her lungs with medication and other ‘gentle’ means, but Maggie wasn’t getting better,” says Dr. Chapman. “She was just stuck.”

Putting hope in a lifesaving therapy

Laren and Cameron were having dinner with Laren’s mom, Cindy, trying to keep their hopes up, when they got a call from Dr. Chapman telling them to come to the hospital right away.

“She said Maggie’s numbers were looking really bad and they were going to have to put her on ECMO,” Laren says. “It was overwhelming.”

ECMO, or extracorporeal membrane oxygenation, is a heart-lung bypass system that takes over circulatory and respiratory functions in infants whose systems fail. Since 1987, CHLA’s ECMO Program has treated more than 1,300 children and is the largest program of its kind in Southern California. A highly specialized ECMO team remains at the bedside 24/7 while babies are on this therapy.

At the hospital, Dr. Chapman explained the risks and told Laren and Cameron that ECMO was Maggie’s only option. She was accompanied by Tracy Grikscheit, MD, Chief of the Division of Pediatric Surgery, who described how she would perform the procedure to insert a small plastic tube in her neck to connect Maggie to the ECMO machine.

“Despite being a lifesaving therapy, there are significant risks with ECMO,” Dr. Chapman explains. “For CDH babies, survival on ECMO nationally hovers around 50%. Also, because we have to use a blood thinner to maintain babies on ECMO, there is always some risk of hemorrhage in the brain.”

While Maggie’s pulmonary hypertension was improving, after nine days on ECMO, her course was complicated by an intracranial hemorrhage. Fortunately, she had made enough progress that she was able to come off of ECMO, but she remained in critical condition.

“Dr. Chapman was hopeful but also very realistic about the possibility that Laren and I were going to have to deal with losing Maggie,” Cameron says. “She also promised to do the best she could.”

Three weeks later, Maggie was strong enough for surgery. Dr. Grikscheit performed the successful operation, which involved moving her stomach, intestines and spleen down into her abdomen—all had migrated to her chest, compressing her heart and lungs—and carefully separating other structures that had fused together before reconstructing the diaphragm to keep the chest and abdomen separate and protect her lungs.

Next, the focus of Maggie’s care turned to weaning her off the numerous medications she had depended on for survival, as well as neurologic exams.

Over the next couple months, “Maggie was able to be weaned off the ventilator, and her neurologic status had stabilized,” says Dr. Chapman. “Based on those factors, and in consultation with the entire team and Maggie’s family, we were able to transfer her to a hospital closer to home to finish out her care.”

Getting the best start to life

Maggie’s last treatment at CHLA was in October 2018 when she was 4 months old. Her family sees that as a blessing. 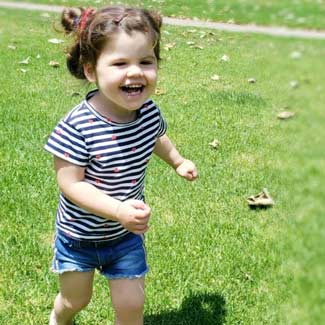 “We were told we should expect to come back in the first year,” says Laren, “almost like ‘you’re not off the hook yet!’ But she’s never had to go back.”

In addition to their daughter’s excellent clinical care, Laren and Cameron appreciate the emotional support they received from everyone they met at Children’s Hospital Los Angeles, including Glenda Danek, MSW, a social worker assigned to the NICCU.

“I remember Glenda saying, ‘You’re so strong to be with Maggie on ECMO and hold her hand,’” says Laren. “She encouraged me and kept me going, because it really was traumatizing for a long time. She helped us coordinate with nurses and doctors, weigh the pros and cons of gut-wrenching decisions, and always reminded us to take care of ourselves. She really was an angel.”

Maggie continues to receive follow-up care near her home, including physical therapy. When she runs around, “she’s a little wobbly,” Laren says. Despite all she has been through, Maggie has excellent gross motor skills and only minor developmental delays.

“She’s doing amazing,” her grandma, Cindy, says with pride. “And she’s so big! Laren took her for a checkup recently, and a doctor came out and said, ‘I’ve never met such a thriving CDH baby before.’”

Through the darkest days, Laren and Cameron knew that Maggie was in the most capable hands.

“We owe CHLA her life,” Cameron says, “and we want to inspire other families to never give up hope.”

For more information about the Fetal and Neonatal Institute at Children’s Hospital Los Angeles, click here.