Published on
September 11, 2020
Categories:
Patient Stories, For Physicians and Clinicians 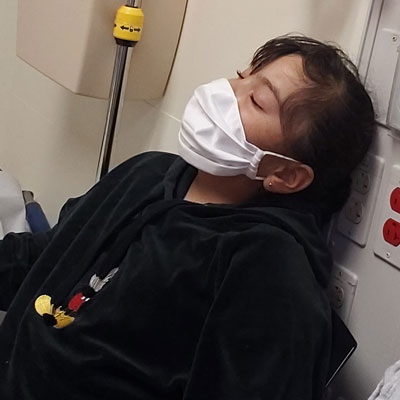 Eight-year-old Xitlali had been running a high fever for a few days, first 101 degrees, climbing to 103 then 105. She started throwing up and developed diarrhea. An urgent care visit sent the family home with Tylenol. A day later, Xitlali’s eyes reddened and she didn’t want to keep them open.

Her mother, Rosa, reluctantly went to work. Her oldest son called with an anxious report: Xitlali had started hallucinating—she thought she saw spiders crawling on her bed and dogs trying to bite her.

That night, the family held a video call with the urgent care center near their Hawthorne home. One look at Xitlali’s eyes and her swollen, strawberry-like tongue, and the doctor said, “Take your daughter straight to the Children’s Hospital Los Angeles emergency room.”

Following that advice, says Rosa, “was the best decision we made.”

It was May 10. At Children’s Hospital’s Maurice Marciano Family Foundation Emergency Department and Trauma Center, a multidisciplinary team jumped into action at Xitlali’s arrival. “I knew then something was terribly wrong,” says her mother.

What the team recognized was a new and rare health condition they had only started seeing that spring—multisystem inflammatory syndrome in children (MIS-C). The mysterious condition was targeting kids who had previously been infected with the novel coronavirus. Many of them had shown no symptoms of COVID-19; others had extremely subtle symptoms.

A small percentage of patients, like Xitlali, later develop the extreme immune response that results in dangerous levels of inflammation throughout their bodies. MIS-C can mimic some symptoms of Kawasaki disease, which causes blood vessel inflammation, and toxic shock syndrome, “but it is neither of these diseases,” says Children’s Hospital Cardiologist Jackie Szmuszkovicz, MD.

Children with MIS-C are typically healthy prior to developing the disorder. That was true of Xitlali, an energetic, athletic child, who loves soccer, riding her bike, jogging with her family and learning how to box from her oldest brother.

The experts at Children’s Hospital had been tracking the emergence of MIS-C for weeks by the time Xitlali arrived, conferring with other medical centers in Europe, New York City and other places around the world where the disease already had a foothold. Xitlali was transferred to the hospital’s Pediatric Intensive Care Unit (PICU)—the first child diagnosed with MIS-C at CHLA to require the high-level unit. 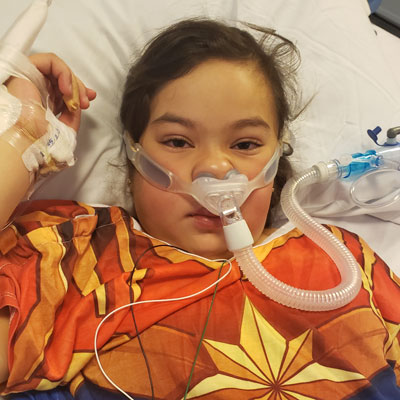 At that point, “the whole CHLA community began taking care of her,” says Dr. Szmuszkovicz. “Fortunately, we were learning more about this disease every day."

In addition to intensive care, subspecialists in infectious diseases, cardiology and endocrinology stepped in at the bedside; cardiac nurse specialists watched over Xitlali as well. Immunologists, rheumatologists, hematologists and other specialists joined in on daily virtual conferences to consult on her case and others.

MIS-C attacks the heart, among other organs, and Xitlali’s heart was in trouble—it wasn’t pumping normally and her coronary artery was dilated, which could trigger serious cardiac events if not treated successfully. Because of shock, her blood pressure was too low. She also had acute kidney injury and fluid in her lungs, making it difficult to breathe.

Doctors gave Xitlali anti-inflammatory therapy and multiple medications, including plasma and steroids via an intravenous drip to support her heart, lungs and other affected organs. Her blood sugar spiked, and she was diagnosed with diabetes.

As the medical team worked, Xitlali’s mother Rosa sat in the waiting area. COVID-19 safety measures meant that only one parent could come inside the hospital at a time. Xitlali’s father, José, stayed home with her two brothers, José Jr., 24, and Emiliano, 12. “I worried we might lose her,” Rosa says.

Rosa also wondered if she and her husband had exposed their daughter to COVID-19. In early March, both parents experienced symptoms of COVID-19 and sequestered themselves in separate bedrooms for two weeks. The two boys avoided their parents, but Xitlali insisted on occasionally visiting. After their isolation, both parents tested negative for COVID-19, and Rosa put it out of her mind.

At Children’s Hospital, Xitlali tested negative for acute COVID-19 infection but positive for antibodies for the coronavirus, meaning she had been exposed in some way. The antibody testing, along with other tests, were done in-house. “That allowed us to get accurate results rapidly, which is key to effective intervention,” says Dr. Szmuszkovicz.

Xitlali’s fever raged; at times she alternated between lethargic and hallucinatory. Nurses tucked ice packs around her body. The doctors and nurses “became like my own family,” Rosa says. “I was so grateful for everything they were doing.” 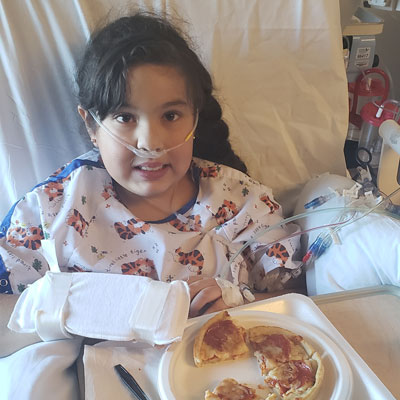 On day seven in the PICU, Rosa knew her daughter was getting better when Xitlali declared, “I don’t want medicine. I want to eat something.” Soon, she was playing games and coloring. Her father came for a visit, and was relieved to see his beloved daughter recovering.

On May 21, her 11th day at Children’s Hospital Los Angeles, Xitlali went home—her heart function now completely restored. She continued to take steroids for two weeks to reduce inflammation in her body. For her, life has gone almost back to normal, and she’s biking, jogging and drawing up a storm. In July, she celebrated her 9th birthday.

Children’s Hospital is closely following 23 children, including Xitlali, diagnosed with MIS-C as of August. No one knows what the syndrome’s long-term consequences may be. Hospital researchers are collaborating with colleagues across the U.S. and internationally to advance scientific knowledge and treatments. “When faced with a new condition like MIS-C, you harness the skills you’ve honed while taking care of other children, and using those tools and your clinical acumen, you work the problem,” says Dr. Szmuszkovicz.

Xitlali doesn’t remember much of her hospital experience, but her mother does. “In the Hispanic culture, we tend to want to treat everything with home remedies,” says Rosa. “If I had stayed home when Xitlali got sick, instead of coming to Children’s Hospital, she could have died. I want other families to know there is another way. Our daughter was in the right hands.”

For Physicians: click here for a detailed analysis of MIS-C