A Family Finds Hope for Down Syndrome Regression Disorder

Published on
May 2, 2022
Categories:
Patient Stories 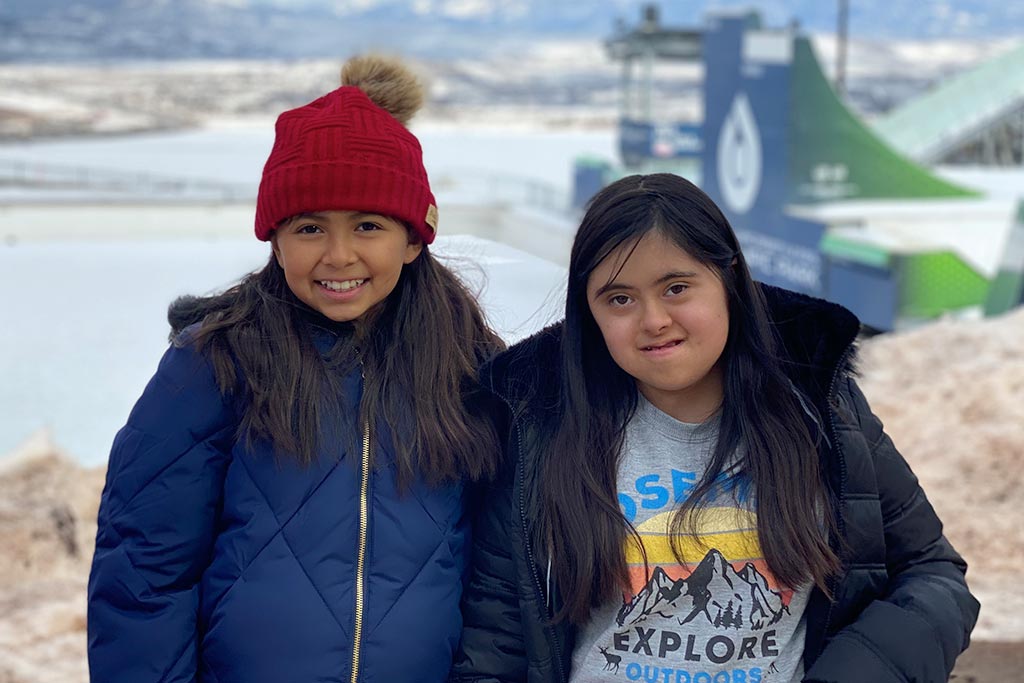 Almost overnight, a mysterious illness left Amy locked in her own world. An experimental treatment, developed at Children’s Hospital Los Angeles, is helping to set her free.

It is hard for Claudia to look at pictures of Amy from before. Back when she was beaming, arm in arm with her younger sister, Lucy. Or proudly showing off her Student of the Month award at school. Or striking a pose, the wind in her hair, during a family vacation in Hawaii.

“Obviously, she always had limitations,” says Claudia, Amy’s mom. “But she was happy. She enjoyed going to school, she had friends, she loved art and dancing. She always wanted to do little talent shows. She was so talkative.

“And then, it just stopped. It was like it all went away overnight.” 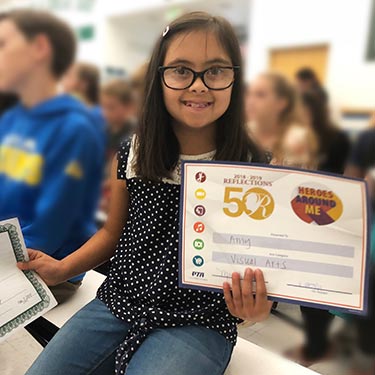 Amy with Student of the Month Award, before illness

Amy’s parents—Claudia and Larry—began to notice something different about their daughter, then 14, in the fall of 2020.

At first the signs were subtle. Although Amy was born with Down syndrome—a genetic condition that causes intellectual and developmental disabilities—she had been thriving. Now, though, she seemed more withdrawn at times, and she had developed some repetitive, obsessive-compulsive-type behaviors.

Her parents chalked up the changes to puberty and the pandemic. Amy, who had always attended regular school, had struggled with online learning. In November 2020, she returned to in-person classes, but she was the only student on campus.

Then, one Saturday morning shortly before Thanksgiving, she didn’t get out of bed. Claudia and Larry tried to talk to her, but she didn’t respond. She wouldn’t get dressed or eat breakfast. Worse, she was hallucinating.

“She was laughing and looking around and saying, ‘Do you see the snakes?’ and things like that,” her mom remembers. “It was like she woke up, and she wasn’t there. She was in her own reality.”

Alarmed, Claudia took Amy to a hospital emergency room. The hospital admitted her and did a brain MRI and other tests. Everything came back normal, but Amy was still hallucinating. She wasn’t even able to physically use the bathroom; she had to have a catheter placed temporarily to empty her bladder.

After two days, she was discharged home, with an appointment with a neurologist a few weeks away. In the meantime, she couldn’t talk or respond to anyone, or even brush her teeth.

Then there was Christmas morning. Amy had always gleefully raced to open her presents with Lucy. Not now.

“She just sat there,” says Claudia. She starts crying at the memory. “We were trying everything we could to engage her. But—nothing. We had to open her gifts for her, and she was not excited about anything. It was really hard.”

No one could help Amy.

The neurologist appointment did not go well. At that point, Amy wasn’t eating or going to the bathroom at all. Her parents felt she needed to be hospitalized again.

At first, the neurologist agreed. But the hospital would not admit her, saying there was nothing they could do. The neurologist then advised them to admit Amy to an adult psychiatric facility.

“I was in disbelief,” Claudia says. “Are you kidding me? She’s not eating; she’s not going to the bathroom. I didn’t know what to do. I just felt so defeated.”

In desperation, she did something she hadn’t done up until that point. Claudia and Larry had been focused on getting Amy to a doctor, to a hospital, to someone who could help. Now, she sat down and began researching Amy’s symptoms online.

Right away, a condition popped up: Down syndrome disintegrative disorder. 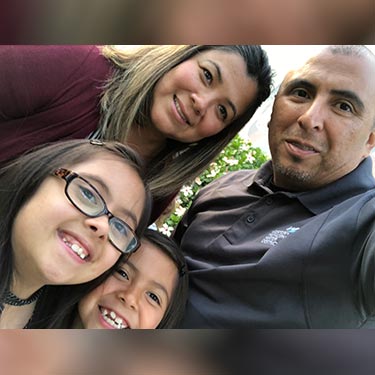 Amy, bottom left, with parents and Lucy (before illness)

Claudia had never heard of it. She started reading. In the condition (recently renamed Down syndrome regression disorder), children and young adults with Down syndrome suddenly lose their ability to dress or feed themselves, use the bathroom, communicate and even sleep. This regression seemingly occurs out of the blue, and over just a few weeks.

“Amy checked all the symptoms,” Claudia says. “I was like, I think this is what she has.”

But where could they take her? The only place she found online was a hospital back east that had treated a small number of patients. Claudia called and made the first available appointment—three weeks away. It was an eternity. We’ll get there, she told herself. We can do this.

Meanwhile, Amy’s constipation and urine retention had become extreme and were impacting her breathing. Her parents took her to a different hospital than before. That hospital admitted her for a week, but could not offer any help in diagnosing her.

The family counted down time until their appointment on the East Coast. They had their plane tickets. The hotel was booked.

But on a Friday, three days before they were going to leave, Claudia was feeling uneasy. Amy was incredibly sick. Should they be flying her across the country? It didn’t feel right. And yet, where else could they find help?

She can’t really explain what happened next. “We’re not super religious,” she starts off. “But I have a friend who is. So I called her that night and I said, ‘I need you to pray for us.’”

The friend prayed for her over the phone. Claudia felt herself calming down. And then, suddenly, an answer appeared in her mind. There was another hospital they hadn’t been to that was just 40 miles from their Upland home. She hadn’t thought of it before, but now, for some reason, she was sure they needed to go there.

It was midnight, but there was no time to lose. She woke Larry.

“You’re going to think I’m crazy,” she told him. “But we need to take Amy to Children’s Hospital Los Angeles. Right now.” 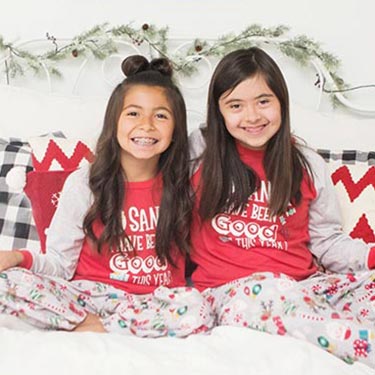 Amy with sister Lucy before illness

Meeting Amy in her hospital room, Jonathan Santoro, MD, had no doubt that she had Down syndrome regression disorder.

He had seen it before—many times. In fact, since 2020, Dr. Santoro, who directs the Neuroimmunology and Demyelinating Disorders Clinic at Children’s Hospital Los Angeles, has been developing an experimental treatment protocol for the condition.

The protocol—which includes high-dose steroids and an immunotherapy called intravenous immunoglobulin (IVIg)—is based on the idea that the disorder has an inflammatory component.

Traditionally, Down syndrome regression disorder (DSRD) has been thought of as a purely psychiatric disorder. Even today, it is often misdiagnosed as early-onset Alzheimer’s disease or something that “just happens” in Down syndrome.

But when Dr. Santoro and his team began doing spinal taps on patients with DSRD, they found that 15% to 20% of them had inflammatory markers in their cerebrospinal fluid. In addition, it’s known that people with Down syndrome are at higher risk for some autoimmune conditions.

“It was a natural fit to say, why don’t we try an immune therapy?” Dr. Santoro remembers.

The first patient he treated had had DSRD for two years—and had not spoken or moved in that time. Two weeks after starting the IVIg infusions, the boy was running down the hallway and talking.

“It was remarkable,” Dr. Santoro says. “I had to pinch myself. It was something where I had thought, let’s give it a shot. I was hoping to see improvement, but this was striking.”

Since then, Dr. Santoro has treated 125 patients, making Children’s Hospital Los Angeles the largest such program in the country. Although there’s been a range of responses, some patients are virtually back to normal. One girl even began playing tennis—something she didn’t know how to do before she got sick.

Dr. Santoro has been sharing the protocol with other centers, and families have been flying to Children’s Hospital Los Angeles from around the country.

“It’s not a one-size-fits-all treatment,” he cautions. “But the vast majority, over 80%, are responding really strongly to the immunotherapies we’re using.”

On the right track

On just the second day of Amy’s infusions, she did something she hadn’t done since the onset of her illness: She used the bathroom on her own.

“Two days—it was that quick,” her mom says. “We knew then we were on the right track.”

Amy began eating on her own, too. Her hallucinations became less frequent. She no longer needed a feeding tube. And her insomnia—which previously kept her from sleeping for an astonishing three, four nights at a time—lifted. Now, she was mostly sleeping through the night.

After two weeks, she went home. “She was nowhere close to baseline, but she had definitely improved,” Claudia says. “We had a lot of hope.”

Amy continued to go to Children’s Hospital Los Angeles every four weeks for outpatient IVIg infusions. She also took medications for catatonia, or muscle stiffness, and did occupational therapy at home. Slowly, she re-learned basic skills like dressing, showering and brushing her teeth.

She was making strides. But still, she wasn’t herself. It was hard on everyone, especially her 10-year-old sister.

“This is a family disease,” Dr. Santoro says. “I’ve had families tell me they have a stranger in the house, or a ghost. Because it’s not the same child. It’s gut-wrenching.”

Amy, now 15, has been slower to improve than many other patients. But recently, she has been making significant progress. 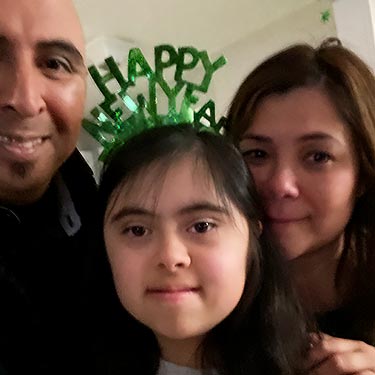 In December, Dr. Santoro added a new medication to her treatment—an immune-suppressing drug typically used in patients who have had organ transplants. The medicine has been working.

Amy is now talking and interacting more with her parents and family. She’s more engaged with her schoolwork and her home teacher. She’s been painting again and is taking an art class.

It is not quite the Amy from before. But she is starting to emerge.

“She’s much more interested in doing things,” her mom notes. “That spark—it’s not completely there. But we’re seeing glimpses of it.

“We are very, very grateful for Dr. Santoro,” Claudia says. “He’s so dedicated to our loved ones with Down syndrome. It’s reassuring to know that there are doctors who care, who are trying to find answers for us.”

Dr. Santoro is now collaborating with colleagues across the country to research DSRD, and he and his team are hoping to launch a multicenter clinical trial this year. The trial would test his existing immunotherapy protocol, along with a new option: an immune-suppressing medication used in rheumatoid arthritis. If the trial is approved, Amy could potentially enroll.

“I want every child to get back to 100%, but we’re learning as we go,” Dr. Santoro explains. “We’re working in real time to find what the best treatments are going to be.”

For Amy’s family, it is difficult to live with that uncertainty. But they are encouraged by her progress.

“She has come so far from where she was,” Claudia says. “We just hope and pray that she will come back fully, and we can see that sparkle in her eye again. That’s what we want the most.”