Published on
May 16, 2021
Categories:
Imagine Magazine

As a leading pediatric academic medical center, Children’s Hospital Los Angeles is committed to improving children’s health—and research plays a vital role in fostering scientific innovation. The hospital has benefited from a decades-long partnership with the Pediatric Cancer Research Foundation (PCRF), which has awarded more than $2 million in grants to investigators in the Cancer and Blood Disease Institute (CBDI) at Children’s Hospital. Jeri Wilson, Executive Director of PCRF, discusses the impact of this meaningful collaboration.

1. In what ways does the partnership with Children’s Hospital Los Angeles help support the Pediatric Cancer Research Foundation’s mission?

In a nutshell, by advancing research at a rapid pace. Children’s Hospital has investigators working at all levels of research that we can support; every single project we’ve invested in at CHLA has shown us a positive return. Collectively we are having a huge impact: Since our inception in 1982, survival rates for childhood cancer have risen from 10% to over 80%. At the same time, PCRF believes that when it comes to research for a child, you need to take care of the whole family. It isn’t just what happens at the bench and the bedside. It’s also what happens through social workers, Child Life, pet therapy. The comprehensive, family-centered care Children’s Hospital provides is definitely something we want to be part of and are proud to support.

2. What made Children’s Hospital Los Angeles stand out as an institution that PCRF wanted to support?

One thing that was super attractive was that both of our organizations are based in Southern California. We want to be invested in the geographic areas where our donors are. But of course it was more than that—it was CHLA’s level of excellence.

3. How has PCRF’s partnership with Children’s Hospital grown through the years?

In 2010, we established the PCRF Clinical Trials Program, which has allowed us to support exciting research led by Leo Mascarenhas, MD, MS [Deputy Director of the CBDI], and other innovators in pediatric cancer research. Most recently we supported Yong-Mi Kim, MD, PhD, MPH, in her work with acute lymphoblastic leukemia, and Anat Erdreich-Epstein, MD, PhD, in her work with medulloblastoma. What is unique is that, previously, we had never funded more than one researcher from an institution at the same time. CHLA’s research has consistently been rated so highly that we made the decision to do that, which makes me really happy.

4. How has the collaboration between the foundation and CHLA helped both organizations succeed?

We like to think we’ve launched some emerging researchers at CHLA who have taken discoveries from the basic science lab to translational research studies—and ultimately to clinical trials protocols. When Dr. Alan Wayne came to CHLA [in 2013 as Director of the Cancer and Blood Disease Institute], he really turned up the burners, recruiting from left, right and center from other major institutions, including some researchers that PCRF had already supported. That was very exciting to see.

5. How does the foundation decide where to allocate grant funding?

Every decision is guided by PCRF’s mission: to identify and fund leading-edge research that promises the best hope for a cure to childhood cancer. We don’t just fund one type of cancer; we fund all of them. So while there’s no exact formula, we want to support investigators who are conducting research into a variety of diseases. Also, when we started nearly 40 years ago in Orange County, we had a Southern California focus. As PCRF grows, we want to be at the forefront of the fight against cancer by advancing research across the country. 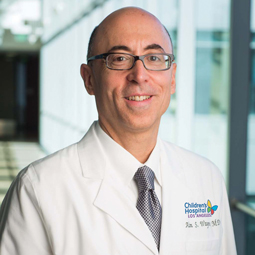 “I am extremely grateful to Pediatric Cancer Research Foundation for its longstanding, generous support of CBDI investigators as they work to develop improved therapies for children with cancer.” 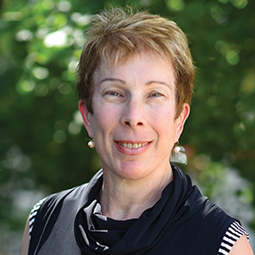 Anat Erdreich-Epstein, MD, PhD, is a physician-scientist in the Cancer and Blood Disease Institute whose research has been supported by PCRF. In addition to caring for children with brain cancer through the years, Dr. Erdreich-Epstein is a Principal Investigator in The Saban Research Institute of Children’s Hospital Los Angeles. In 2014, her lab discovered that a little-known gene called PID1 acts as the brakes in brain cancer by slowing tumor growth, and its presence in higher amounts is associated with longer survival in patients with medulloblastomas, gliomas and atypical teratoid rhabdoid tumors. She is now dissecting the molecular mechanisms by which PID1 functions, with the ultimate goal of using the new knowledge to improve brain tumor treatment. 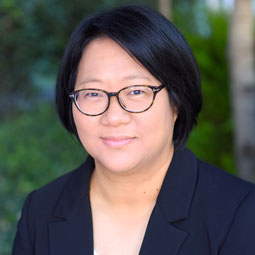 Yong-Mi Kim, MD, PhD, MPH, a researcher in the Cancer and Blood Disease Institute and a Principal Investigator in The Saban Research Institute of Children’s Hospital Los Angeles whose work has been supported by PCRF, is helping to advance our understanding of acute lymphoblastic leukemia (ALL), the most common form of childhood cancer. Although many children treated for ALL are cured, a significant number are resistant to chemotherapy or relapse after initial success. Dr. Kim’s lab recently discovered that a Velcro-like protein called integrin a6 helps anchor leukemia cells in the bone marrow—known to be a safe haven for cancer cells—but when it is blocked, chemotherapy is more effective. Moreover, when integrin a6 was genetically deleted, some cancer cells died with no chemotherapy at all. Dr. Kim’s exciting findings may be translated to treat other cancers if they are found to share similar drug resistance pathways. 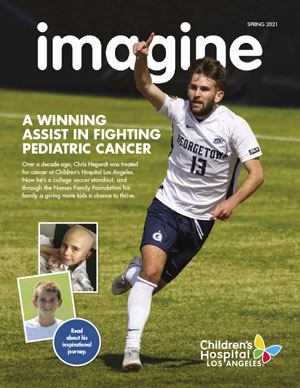