What Is Necrotizing Enterocolitis? 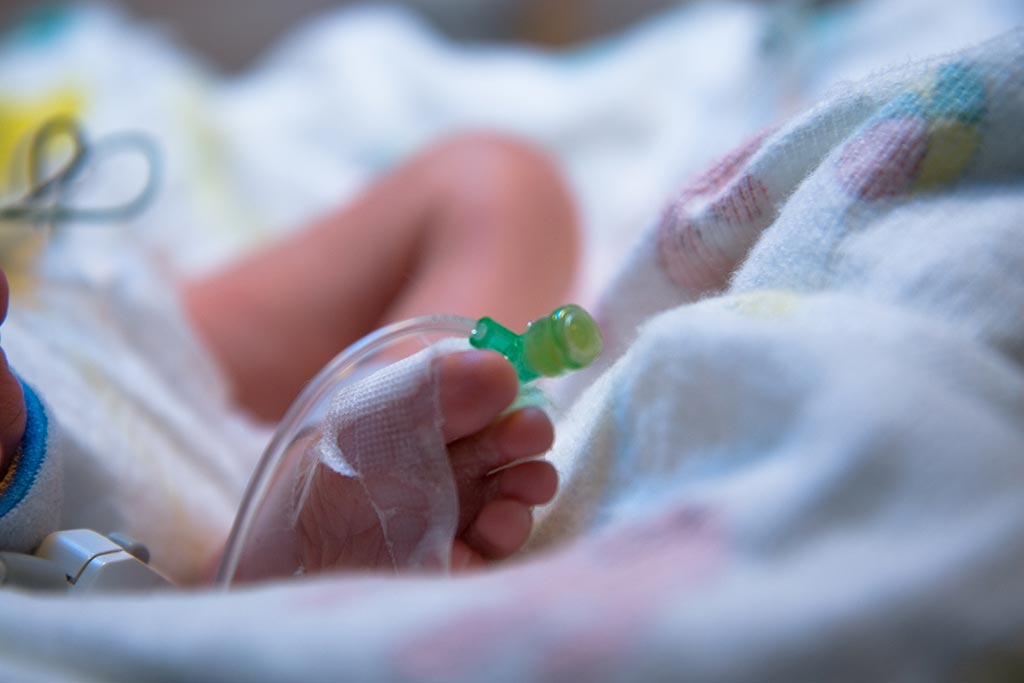 For the parents of premature babies, the condition known as necrotizing enterocolitis (NEC) is as frightening as it sounds.

NEC is the most common and serious intestinal disease among premature babies. The problem inflames intestinal tissue. In nearly half of all cases, a hole can form in the baby’s intestines, causing bacteria to leak into the gastrointestinal system and bloodstream. Even with treatment, the condition can become fatal.

Christopher Gayer, MD, co-Director of the Colorectal and Pelvic Anomalies Program at Children’s Hospital Los Angeles, describes the condition as potentially “devastating,” and notes that it typically compounds other challenges premature infants face.

“NEC patients typically are sick to begin with,” he said. “If there’s a silver lining it’s that [NEC] typically occurs in infants who are already in the hospital because they were born well before 38 weeks.”

Julie Thai, MD, Attending Neonatologist in the Newborn and Infant Critical Care Unit at CHLA, says many parents don’t even know NEC is a possibility until their children are affected.

“This really isn’t on any parent’s radar,” she said. “That’s why it’s so important to catch it and treat it early.”

How common is it?

NEC usually develops in premature infants a week to several weeks after birth, depending on how premature the infant is born. Overall, the condition affects 1 in 2,000 to 4,000 births, or between 1% and 5% of neonatal intensive care unit admissions. The condition is rare in full-term infants.

Most infants who develop NEC recover fully without surgery and do not have further feeding problems. In some cases, scarring and narrowing of the bowel may develop and can lead to future intestinal obstruction or blockage. The condition can also lead to malabsorption, or the inability of the bowel to absorb nutrients normally. This is most prevalent in children who require surgery for NEC and lose a large segment of intestine.

Though the exact cause of NEC is still unknown, doctors have pieced together several theories to explain why NEC affects mainly premature infants, and most agree that it is caused by a combination of factors.

One theory focuses on the fact that premature infants have immature organs, particularly the intestines. The intestines are still developing and may not react appropriately to food or bacteria. This reaction can lead to damage of the bowel walls and allow bacteria that normally live inside the intestine to invade the walls themselves.

Another contributing factor could be depressed good bacterial content in the gut.

“Infants who have developed NEC have an abnormal gut flora prior to developing the condition,” says Dr. Thai. “There are many factors that can lead to NEC, but we find that gut flora does have an important contribution.”

Other research has focused on the impact of feeding premature infants formula versus breast milk. Recent studies have suggested NEC is more associated with formula-fed infants, but no one knows why. Breast milk provides many beneficial components to the infant, including sharing the mother’s protective antibodies that can help the infant fight infection. Many neonatal intensive care units also provide breast milk from donor milk banks.

How do doctors diagnose it?

One of the first symptoms is the inability to tolerate food. At mealtimes these infants often experience bloating (doctors call it “abdominal distention”) and vomiting. Infants with NEC may also have bloody stool because of the infection of the bowel wall.

Dr. Thai says that early symptoms of NEC can also be subtle. The child may just have abnormal vital signs, such as increased or decreased heart rate, low temperature, dips in oxygen saturation levels or pauses in spontaneous breathing. Low oxygen levels or abnormal breathing patterns may necessitate the insertion of a breathing tube.

“These findings put the infant at risk for intestinal perforation and serious systemic infection,” says Dr. Gayer. “We don’t have early detection mechanisms, so the hard part of all of this is that by the time a baby shows symptoms, NEC is already progressing.”

“Air is supposed to be inside the gut, but if it gets inside the wall of the bowel, that’s the sign of intestinal injury,” says Dr. Gayer.

Physicians can also determine if an infant is experiencing NEC is by conducting basic blood tests; in some cases, blood panels may reveal lower-than-usual numbers of infection-fighting white blood cells and low counts of platelets, which normally help form blood clots.

How do doctors treat it?

Once doctors diagnose NEC, they give the gut time to relax by stopping feeding and suctioning the stomach. After that, the infants are fed intravenously to avoid using the gastrointestinal tract altogether, allowing time for the intestines to heal. Doctors also prescribe a broad spectrum of antibiotics to cover many different bacteria, since they don’t know which ones are causing the condition.

“We hope the combination of treatment and the baby’s own immune system can reverse the trend,” says Dr. Gayer.

Over the course of antibiotics, doctors perform frequent examinations and X-rays of the abdomen. These tests generally are sufficient in determining how the infant is responding.

Infants who respond to this treatment often can resume feedings by mouth in five to seven days, or when signs of the infection have disappeared. Infants who have more severe disease may require a longer period for the return of bowel function, which is determined by the presence of normal bowel movements.

When is surgery necessary?

About 25 percent of infants who develop NEC will need to have infected sections of the intestine removed. Dr. Gayer says these surgeries are complicated, since the babies weigh no more than 3 to 5 pounds.

In many cases, a hole in the intestinal wall leads to spillage of stool into the abdomen. In addition to removing necrotic bowel, a surgeon often will not attach the bowel back together, but instead bring the bowel out to the skin. This is known as an ostomy. Following the surgery, patients will make bowel movements out of a stoma into a bag until they have recovered from the infection—usually about 6 to 8 weeks. At that point patients can undergo a second surgery to reverse the stoma and reconnect the intestine.

Surgery is not a guarantee of survival. Roughly 40 percent of babies who need surgery for NEC don’t survive. Those who survive surgery can be at risk for other long-term problems.

“Premature infants are born with challenges,” he said. “When you add NEC to the list of complications that can include congenital heart disease and some degree of lung disease, there are just a lot of things that can go wrong.”

What is the future of NEC treatment?

New treatments for NEC are on the horizon.

CHLA researchers are investigating the possibility of administering probiotic bacteria to promote colonization of “normal” or healthy bacteria, and oppose the effects of the bacteria that cause infections. Other promising treatments include blocking the production of nitric oxide, which is produced in high quantities during NEC and contributes to the destruction of the intestinal wall.

“Can we give some kind of medication that will prevent a hyperactive immune response, so we don’t get the kind of overwhelming intestinal inflammation that we see in NEC?” asks Dr. Thai. “We’re not at a point where we know how the immune system is working in a preterm infant, but people have been investigating to see if we can target one particular component of the immune system to prevent the hyperreactive response and resulting overwhelming inflammation we see.”

Until detection methods improve, Dr. Gayer says that doctors will err on the side of treating for NEC even if they’re not certain an infant has developed it, since the consequences of NEC progressing are so devastating. They will also continue to raise awareness about the disease and how treatable it is.

“The biggest misconception is that this is a death blow,” he said. “It’s not. Babies can recover and live a normal life. Nobody would ever be able to tell there was anything wrong.”

Learn more about our Newborn and Infant Critical Care Unit.