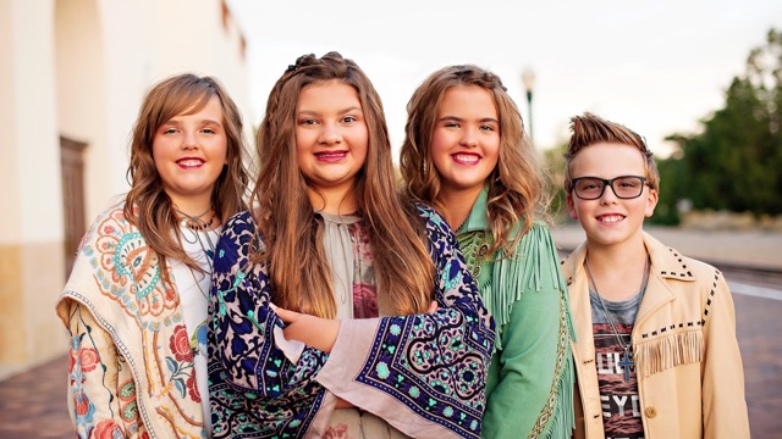 A quartet of teenage siblings makes CHLA happier, one song at a time

To many, they’re The Runaway Hamsters—a talented band of child musicians who sing country pop and strive to help those in need.

To Children’s Hospital Los Angeles, however, the four Keen siblings from Boise, Idaho, are much, much more: advocates, patients, helpers, angels, fundraisers, role models and even superheroes.

Over the course of the last six years, Isabella Keen, 14, and triplets Abby, Gabby and Riley, age 12, have become a mainstay at CHLA; two as patients, the others just along for the ride. In recent years, the quartet also has signed up to be part of the CHLA Junior Ambassadors program. In that capacity, they have played free concerts, visited with patients and raised thousands of dollars to support research and music therapy.

“It’s been an incredible community to become a part of,” says Barbara Keen, the children’s mother. “What [CHLA] had to offer us was hope, and when you can offer someone that, it’s awesome.” 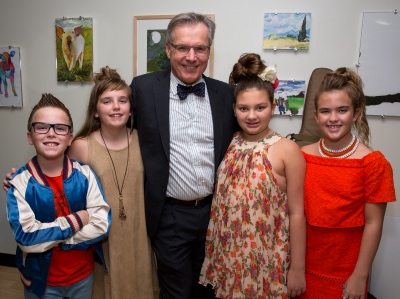 Abby has a unique perspective on the Keen family’s involvement with CHLA; in many ways, she’s the reason the two are connected at all.

Way back in 2012, when Abby was 6, doctors in Boise diagnosed her with physical disabilities in her right eye. Her parents couldn’t find anyone local to perform the necessary surgery and treatment, so they reached out to The Vision Center at Children’s Hospital Los Angeles, which sees more than 15,000 patient visits each year. Mark Borchert, MD, director of the Eye Birth Defects Program at The Vision Center, responded with a mix of curiosity and enthusiasm. He has been in Abby’s life ever since.

Initially, Borchert’s prognosis for Abby was complicated. Abby was diagnosed with Brown syndrome, which essentially is an inability to move the eye upward. As Borchert describes it, the condition caused one particular tendon in Abby’s right eye to be tighter than others, and that muscle acted like a leash on the eye itself, preventing it from full range of motion.

“The Brown syndrome caused her to not use both eyes together,” says Borchert, who also serves as associate professor of clinical surgery at the Keck School of Medicine of the University of Southern California (USC). “It got to a point where her brain started ignoring the right eye completely.”

The condition is called amblyopia—when communication between the brain and eye doesn’t develop correctly. While it was something Borchert had seen many times before, he says Abby’s case was challenging because she came to him at a much older age than kids with the condition usually do. The older the patient, he explains, the harder it is to retrain the brain to use the eyes together.

Still, he was undaunted. Borchert pursued an aggressive course of surgery followed by vision rehabilitation. The surgery was complicated, and it required Borchert to splice a silicon band and attach it to the tight tendon to create some slack. The therapy was even more involved; the Keens had to fly to Los Angeles from Boise every three months so Borchert could use eye drops to blur vision in her left eye, forcing Abby’s right eye to get stronger.

This process helped retrain Abby’s brain to use both eyes simultaneously. In the end, Abby came through the treatment even better than expected. Today, Borchert says her left eye has “super vision” and is better than 20/20, while her right eye—the problem eye from the beginning—has “driving-level vision.”

His nickname for Abby after the improvements she made: Eagle-Eye.

“He really made me feel special,” says Abby. “I was nervous at the start because I thought he’d be rude like most of the other doctors I’d seen. But he definitely was really nice and supportive.” 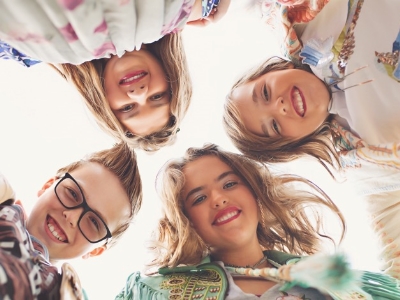 About a year after Abby’s experience with Borchert ended, another of the Keen siblings, Riley, embarked on a similar journey of his own—a two-pronged fight to correct amblyopia and esotropia.

Not only did Borchert’s treatment help Riley overcome his issues, but it also kept The Runaway Hamsters connected to CHLA. And it inspired them to want to do more.

So in 2016, when CHLA reached out to Barbara and the Keen siblings and asked if they would become a part of the Junior Ambassadors program, the Keens were all in. The Junior Ambassador program is made up of kids and teens from the community who support the hospital’s lifesaving work. As Abby notes, “[The program] does exactly the kind of stuff we like to do.”

Since that day, the Keen siblings have helped out in many ways. They’ve performed at the 2016 Dreamnight event at the Los Angeles Zoo and played mini concerts at the hospital itself. They even inspired the donation of musical instruments and supplies for CHLA’s music therapy program.

They also have tried their hands at volunteer fundraising, and so far have raised nearly half of their $7,500 goal. They set up a webpage for their fundraiser, and stipulated that the money raised would directly support Borchert’s work at The Vision Center.

“They are a uniquely tight family,” Borchert says. “The most striking thing about them is how kind they are to each other, and to everyone else. I think that says a lot.” 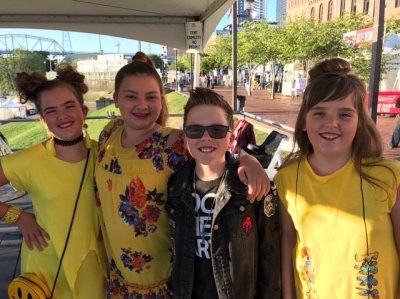 The Runaway Hamsters might be gaining momentum in the music world these days but they’re not planning to stop giving back to CHLA.

The kids recently traveled to Nashville to perform at CMA Fest, a big deal for any country pop artists but especially for four siblings under the age of 15. Earlier this spring, they released a new single—an upbeat song titled “Go!” They have also premiered their latest music video, “Put Your Smile On.” In August, the kids will accompany Riley back to CHLA for his annual check-up, and likely schedule one or two performances at the hospital around that.

Of all the important things on their long-term calendar, it seems that the next performance at CHLA is the one that Isabella, Abby, Gabby and Riley are looking forward to most.

“It always makes me happy to see kids smile, or them laughing, having fun, getting better, because that makes my heart feel warm inside,” says Abby. “CHLA was so good to me. It means the world to be able to give back.”