Billy Becerra and the Unbearable Lightness of Grieving

Published on
May 24, 2018
Categories:
Patient Stories 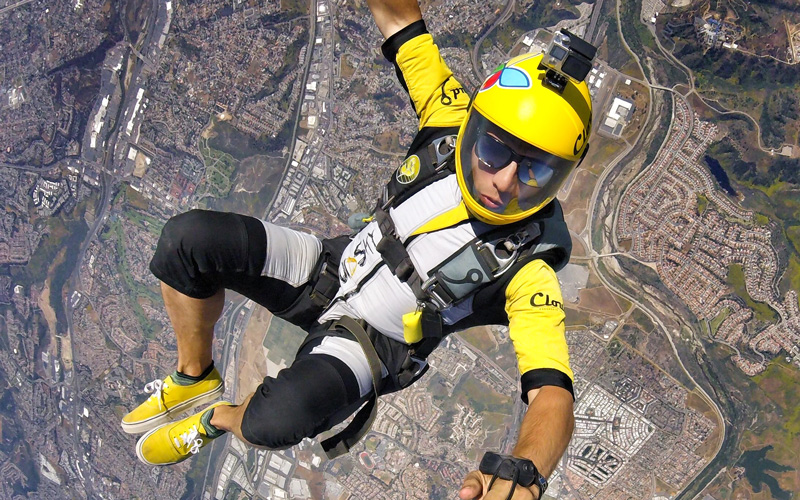 In the wake of the first anniversary of his newborn son’s passing, a father finds solace in skydiving and triathlon training, making sure to never be far from the loss.

“Have you ever jumped out of an airplane?”

You got the wrong guy, buddy. Any points for parasailing?

No, none, Billy Becerra says. “That’s nothing compared to skydiving. It’s more like flying. When you’re falling, you can actually fly. You can move forward and back, and left and right. You can fly all over the sky.”

His first jump was with his wife, Elisha, several years ago. He got hooked, then certified, and now runs a side business leasing parachutes to other jumpers.

“It changed my perspective on life,” he says. “Life is pretty fragile, but at the same time, you just did something pretty cool, right? And my life has been pretty good. I have a really good job that I’ve had since I was 18 years old, and that has afforded me a lifestyle where I can buy a house. My wife’s dad’s a rock star and we get to travel all over the world. I have nothing to complain about. My life has been awesome! When I started skydiving, I became grateful for all that.”

He decided he would release his son’s ashes on a jump. He and Elisha would go to Hawaii on Rex Becerra’s first birthday, dive from a plane together, and cast Rex’s remains into the sky. Rex’s first birthday passed in March.

You know that one? Man plans, and God laughs?

In March 2017, Becerra had things all plotted out. He was getting back to his three hobbies. He was going to grab his drum kit and get his band, Rotus, back together, ramp up his skydiving, and play a lot more golf. He would get to all that right after polishing off his first L.A. Marathon in what he hoped would be under four hours.

He checked off the first piece of the plan, finishing the marathon in three hours, 50 minutes. The race path took him right past Children’s Hospital Los Angeles. “Literally, on foot, ran right down it.”

The next evening he would return to CHLA in an ambulance, his newborn son’s life imperiled. 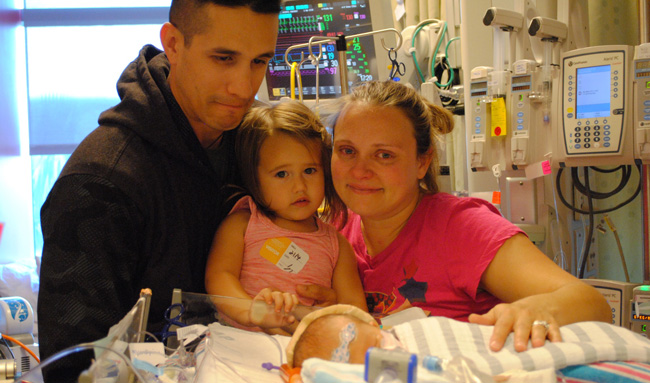 Several hours earlier, on March 20, 2017, Rex was born at a community hospital, near Becerra’s home in Monrovia. He looked ill from the outset. His legs were purple, while his upper body was pink. The pediatrician who examined him heard a worrisome murmur in Rex’s heart and had him transferred to the neonatal intensive care unit at a nearby center, where he was seen by pediatric interventional cardiologist John Ho, MD.

Ho found that Rex had an incompetent aortic valve, too small to pump blood out to the aorta and on to the body, which explained the discoloration in his legs. Unable to flow outward, blood was jamming up inside Rex’s left atrium, causing it to swell like a water balloon.

Ho had Rex transported to CHLA. Once there, Ho performed an emergency catheterization procedure to forge a hole between the left and right sides of Rex’s heart, enabling blood flow between the two and deflating the swollen left atrium.

But the procedure was a stopgap measure. Rex needed an intricate open-heart surgery known as a Ross procedure to address his aorta’s structural defects. The surgery removes the diseased aortic valve and in its place is sewn in the pulmonary valve, borrowed from the opposite side of the heart, where it ushers blood into the lungs. A donor pulmonary valve is then implanted to take over for the original.

Cardiothoracic surgeon Vaughn Starnes, MD, co-director of CHLA’s Heart Institute, would operate on Rex, and he is widely known for his expertise in the procedure, shared by few other surgeons, Ho says. But Becerra saw a drawback in Starnes’ participation.

“I would hope they could say, ‘We got Joe the intern over here and he can do this on the back of his hand,’” he says, “than to know I’ve got such a serious condition that I have to have the best in the world.”

Mechanically, the surgery was a success, the valves replaced and the aorta opened. But even with its anatomy repaired, Rex’s heart was unable to perform on its own, having been so stressed in those initial 24 hours after birth. It never managed to regain the strength to sustain Rex’s life, and he passed away April 4, 2017.

Becerra says he was determined not to disintegrate from the loss. His perspective was framed by the two weeks he spent residing in his son’s hospital room.

He says that looking after his daughter, Nina, who turns 3 in June, has kept him occupied and centered.

“If I keep myself busy, then I don’t have time to have a breakdown. I can’t break down—I’m the father of the family. I’ve been a tough guy my whole life. There’s no way I’m going to let something crush me. There’s just no way.”

“I’m not really a tough guy,” he says, quieting. He played football in high school, a wide receiver on a team whose offense struggled. He mostly served as a tackling dummy for opponents to get in their licks.

“I was the small guy on the team. I got crushed. The only way I could play was if I was dumb enough to take hit after hit after hit. There might’ve been a guy who was bigger, stronger, faster than me, but he didn’t want to get hit.”

He keeps his pain close now, afraid to part from it as if it were a material possession. He has chased it through nuisances like rain and heat, pursued it in ocean swims, run after it up mountain trails. 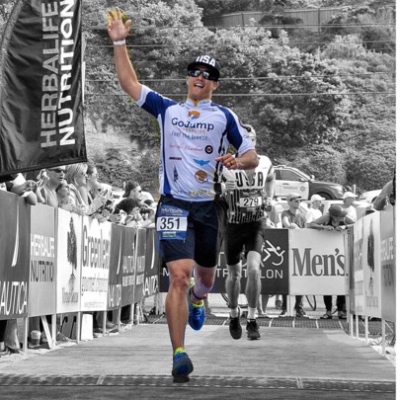 To keep Rex’s memory burnished and present, Becerra has dedicated himself to triathloning. In the first year since Rex’s death, he competed in five races, with a sixth up ahead, the Nautica Malibu Triathlon, a fundraising event for CHLA, offering Becerra another avenue to support the hospital. (He and his wife are also participating in Walk and Play L.A. on June 2. They were the top fundraisers at last year’s event, fueled by donations from fans of Van Halen, Elisha’s father’s former band. See sidebar below.)

Becerra has found his own course for grieving. The physical suffering of training straps him to the emotional anguish over his son’s passing, which he never wants to let far from his thoughts, lest one day he can’t recall it.

“I don’t want it to go away, you know?” he says. “I had a dog that I really loved, and my dog died. I’ve had two dead dogs, and that doesn’t bother me at all now. I do not want to ever feel that way about my son. That’s why I like to tell his story, because it keeps the pain real. I’m afraid the wound will heal.”

Training forces the wound open. He exhorts himself to bear up because his son endured far more. “When you’re thinking, man, I’m getting tired, it’s really easy to think back. Like, this is nothing.”

He increased his race distance as the triathlons became too easy. In April, Becerra did the Ironman 70.3 in Oceanside, the number signifying the full length of the race in miles. “I had to take the next step,” he says. “I can push harder, I can run faster, I can go further.”

When he’s not training, he still makes sure the pain doesn’t get far from view. He looks off to his right and starts to mime an illustration of the inside of his home.

“We’ve got these three shelves that go right into the corner of the wall. On the top shelf is him, his ashes, in a box that I made for him. I pack my own parachute; there’s no way I’m going to let someone else make an urn for my son, right? It’s four pieces of wood that are nailed together, but I made it, right? So. I made it. We baptized him in the hospital, so we have the holy water from that. Then the next shelf down is a picture of him in a frame that somebody gave us, I think it was my sister, that says, ‘You were here for a moment, but you left an effect on the world forever.’

“And then there’s a little bowl. My wife and my daughter once a week change out the flowers. My daughter loves that part.”

It didn’t happen this year, but there will be an April 4 when Becerra steps to the open door of an airplane, checks to see he has his wife alongside, and leaps, and then spreads Rex’s ashes in every direction, left and right, forward and back, trusting his pain to a sky that’s wide enough to hold it.

‘I Wanted There to Be Purpose to His Life, and There Was’ 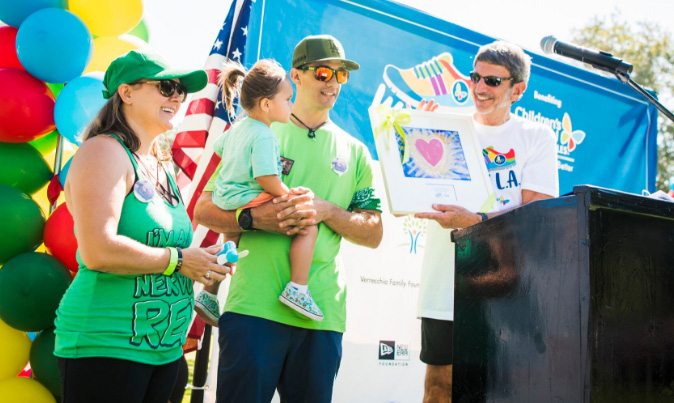 At Walk L.A. last year, CHLA President and CEO Paul S. Viviano honored the Becerras for being the top fundraiser.

Billy and Elisha Becerra figured they could use last year’s Walk L.A. event on behalf of Children’s Hospital Los Angeles as a “platform for therapy,” Billy says. They signed up for the walk while their son, Rex, was receiving critical care at CHLA for a congenital heart defect.

“We thought, regardless of what happens here, we see good things happening and we want to support the hospital,” Billy says. “The only way really to do that is to help raise money.”

After Rex passed away, they planned a low-key walk together. Billy named the team Rex and the Heartbeaters and set up a website to accept donations. It began seeing more activity than he ever anticipated. A remarkable $50,000 came in from family and friends. His employer, a civil construction company, pitched in another $5,000.

The total then surged after a social media post by Elisha’s father, Michael Anthony, former bass player for Van Halen. Donations began appearing from Van Halen fans, in small increments of $5 and $10. “Like $30,000 from people all over the country,” Billy says. “I could never tell you who they were.”

Sammy Hagar, Van Halen’s former lead singer who remains close friends with Anthony, contributed a few thousand as well. And then one morning contributions jumped $10,000. “We just woke up one day,” Elisha says, “and were like, ‘What? $10,000? From who?’”

The source turned out to be Hagar’s Van Halen predecessor, David Lee Roth, whom Anthony hadn’t seen since the two were in the band together. “That was out of the blue,” Elisha says. “It was amazing. My dad hasn’t talked to him in probably 16 years.”

In all, Rex and the Heartbreakers raised just under $107,000, more than a quarter of the event’s overall fundraising take.

The breadth of Becerra supporters cut quite a presence at the walk. “I think we made up more than half of the people there,” Billy says. “It went all the way down to friends of cousins.”

The entourage included a former employee of Anthony’s who drove in from Bakersfield. If you’re browsing through pictures from the walk, he’s the one in the Buzz Lightyear costume riding an inflatable dinosaur.

“If there’s a benefactor to his memorial, it would be Children’s Hospital. They did everything they could to save his life.”

He and Elisha will be at this year’s event, refashioned as Walk and Play L.A., on June 2. They don’t expect the same level of fundraising, but there will be no dip in their ongoing commitment to supporting CHLA patients.

“Our story didn’t end very well,” Elisha says, “but there are kids out there, their story is going to continue, and we want in any way we can to help it continue.”

To donate to Walk and Play L.A., or to sign up for the event, visit www.WalkandPlayLA.org.