You’re the second level of support when you’re the grandparent. So after her 19-month-old granddaughter, Bella, was diagnosed with advanced neuroblastoma, Marilyn Smith knew it was her daughter, Jennifer Smith, who would occupy the front line, spending day and night with Bella at Children’s Hospital Los Angeles.

What could she and her husband, Jack, do? What help could they provide? “That’s when we started donating,” Marilyn says.

Marilyn and Jack began giving to multiple areas of the hospital, supporting research into new treatments for the disease, a pediatric cancer that often originates in the adrenal glands, as it did with Bella. “It just felt right, donating,” Marilyn says, “not just to help Bella, but to improve the survival rates for all children.”

The high-risk neuroblastoma that Bella faced—meaning it had spread throughout her body—has a discouraging prognosis. The five-year survival rate is 40% to 50%.

‘Mom, are you donating?’

Bella made it to kindergarten and kept going. Now age 12, she has been in remission for 8½ years. Though she’s experienced some side effects of chemo, including hearing loss and diminished bone growth, she’s a high-achieving middle schooler who sews and bakes and has a beautiful singing voice, according to her mother.

“If you look at her, she’s a healthy, sassy teenager,” Jennifer says. “No one would ever know what she’s endured.”

A resident of La Verne, about 35 miles east of Los Angeles, with a job as a health care administrator, Jennifer knew about Children’s Hospital Los Angeles. She had friends whose children had been treated there. “I had heard of it and how great it was, but I never had any experience there,” she says. “Now I will sing about it from the rooftops.”

She was unaware that her mother was donating to the hospital until she received a card in the mail informing her that a contribution had been made in Bella’s honor. Printed on the card was the name of the gift’s source. “I was like, ‘Mom, are you donating?’” Jennifer says. “And she said, ‘Oh yeah, I have been since Bella got sick.’ I had no idea.

“The oncology team talks about the resources needed to do research, to try to get to the next discovery,” she goes on. “They say about every 10 years they find something that adds to the treatment. Having my mom contribute to that is awesome.”

Giving where it’s needed most

Marilyn, 74, grew up in Los Angeles but since 1970 has lived in Ojai. She and Jack, who passed away in 2018—both lifelong educators—gave frequently to local charities supporting health care and education.

That drew them to Children’s Hospital Los Angeles. They could see the impact of their giving, the groundbreaking work it enabled, and the lives it saved or improved. Their initial contributions supported Anat Erdreich-Epstein, MD, PhD, who at the time was Bella’s oncologist and was collecting donations as a participant of the Malibu Triathlon, an annual fundraiser that benefits cancer research at the hospital.

“It just felt right, donating, not just to help Bella, but to improve the survival rates for all children.” — Marilyn Smith

Marilyn says the hospital is now the focus of her gift giving. She trusts each donation will be put to good use, so she leaves it to the hospital to decide where it should go.

“Usually I write some kind of note that says, ‘Please use where it’s most needed,’” Marilyn says. “I want my donation to be like boots on the ground. Use it where it can be most effective. I just like to know that it’s being used to help research, to help the most vulnerable, to improve survival rates.”

Donating also gives Marilyn an avenue for expressing her gratitude, thankful that her daughter and granddaughter live within driving distance of an elite pediatric care center like Children’s Hospital Los Angeles.

Why I Give: Kathleen McCarthy Kostlan

Dynamic Duo: Two Sisters Give Back 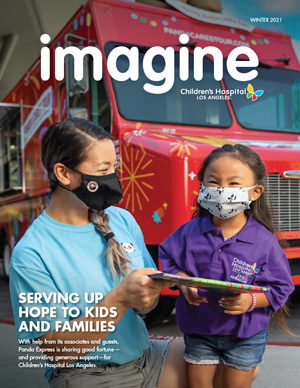