A study of 70 mothers and their infants suggests that the impact of maternal stress on neurodevelopment is detectable by electroencephalography (EEG) at 2 months of age. The team of investigators, co-led by Pat Levitt, PhD, of Children’s Hospital Los Angeles, and Charles A. Nelson, PhD, of Boston Children’s Hospital, published their findings in JAMA Pediatrics on April 8, 2019. 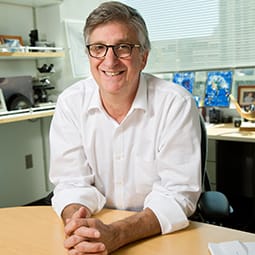 Early adverse childhood experiences have been shown to impact later learning, behavior and physical health. The prenatal and early-infancy periods are times of particular vulnerability when experiencing early adversity because the brain and other organ systems are undergoing dramatic changes as they mature.

“The ability to detect signs of neurodevelopmental delay at such a young age could provide an opportunity to intervene early by minimizing maternal stress and providing other factors to buffer the impact on the infant,” said Pat Levitt, PhD, Chief Scientific Officer and director of the Saban Research Institute and Simms/Mann Chair in Developmental Neurogenetics at Children’s Hospital Los Angeles.

In partnership with AltaMed Community Health Pediatric clinic in Los Angeles, and a community pediatric practice in Boston, mother and infant pairs were enrolled in the study soon after giving birth. When their infants were 2 months old, mothers filled out questionnaires to indicate their emotional state, recent life events that may have been disruptive, and overall maternal stress by the Perceived Stress Scale.

The goal of the study was to determine risk and resilience factors using different measures of infant neural activity. One technology, electroencephalography (EEG), recorded brain wave activity while the infants viewed random scenes on a video screen. Waveforms on an EEG recording can be categorized into different frequency bandwidths. Each frequency indicates varying amounts of brain circuit activity. The neural networks in infants tend to be simple since the cells and connections are just being formed. As the baby develops, the circuits become more mature and capable of greater information processing.

This increased neural development appears as activity in the gamma frequency of the EEG. The investigators found that increased maternal stress correlated with less gamma frequency activity, indicating delayed development of the brain compared to infants of mothers that reported low stress.

“It’s important to recognize that this was a study of infants seeing their pediatrician for a regular check-up,” said Levitt. “The stressed mothers and the non-stressed mothers shared similar demographics, such as ethnicity, age and family income, yet babies whose mothers reported to be stressed appeared to be less neurologically developed.”

An important finding reported in the article was that higher maternal education, such as high school graduation, may serve as a protective factor to buffer against the stress effect. Babies, whose mothers were under stress but had completed high school or had some college education, exhibited gamma activity indistinguishable from mothers who did not report being stressed.

The initial report conducted at two months of age is part of an ongoing longitudinal study in which the research team is performing measures on the mother-infant pairs at 6, 9, 12, and 24 months of age. They are currently analyzing the data to determine if the changes in brain development are long lasting or if the infants may catch up over time.

Of note, nearly all of the families enrolled in Los Angeles self-identified their ethnicity as Hispanic and indicated that this was their first opportunity to participate in research. Surveys completed by the mothers showed that this was a positive experience as it allowed them regular interaction with the research team who provided information about typical developmental milestones of their infant and how to access local community resources that may provide additional support for both parent and child.

Support for this study was provided to Dr. Levitt and Dr. Nelson by the JPB Foundation-funded Research Network on Toxic Stress and Health through the Center on the Developing Child at Harvard University. Additional contributors to the study include first author, Lara J. Pierce, Emily Reilly, Viviane Valdes and Kathleen Conroy of Boston Children’s Hospital; Alma Gharib, Lisa Schlueter and Suzanne Roberts of Children’s Hospital Los Angeles; and Barbara Thompson of Michigan State University. In Los Angeles, research staff members Sandra Figueroa and Juan Ramirez have been instrumental in the success of recruiting families and retaining them in the study.

Founded in 1901, Children's Hospital Los Angeles is ranked the top children’s hospital in California and sixth in the nation for clinical excellence with its selection to the prestigious U.S. News & World Report Honor Roll of children’s hospitals. Clinical care is led by physicians who are faculty members of the Keck School of Medicine of USC through an affiliation dating from 1932. The hospital also leads the largest pediatric residency training program at a freestanding children’s hospital of its kind in the western United States. The Saban Research Institute of Children’s Hospital Los Angeles encompasses basic, translational and clinical research conducted at CHLA. To learn more, follow us on Facebook, Instagram, LinkedIn and Twitter, and visit our blog for families (CHLA.org/blog) and our research blog (ResearCHLABlog.org).