Published on
October 14, 2022
Categories:
For Physicians and Clinicians, Hospital News 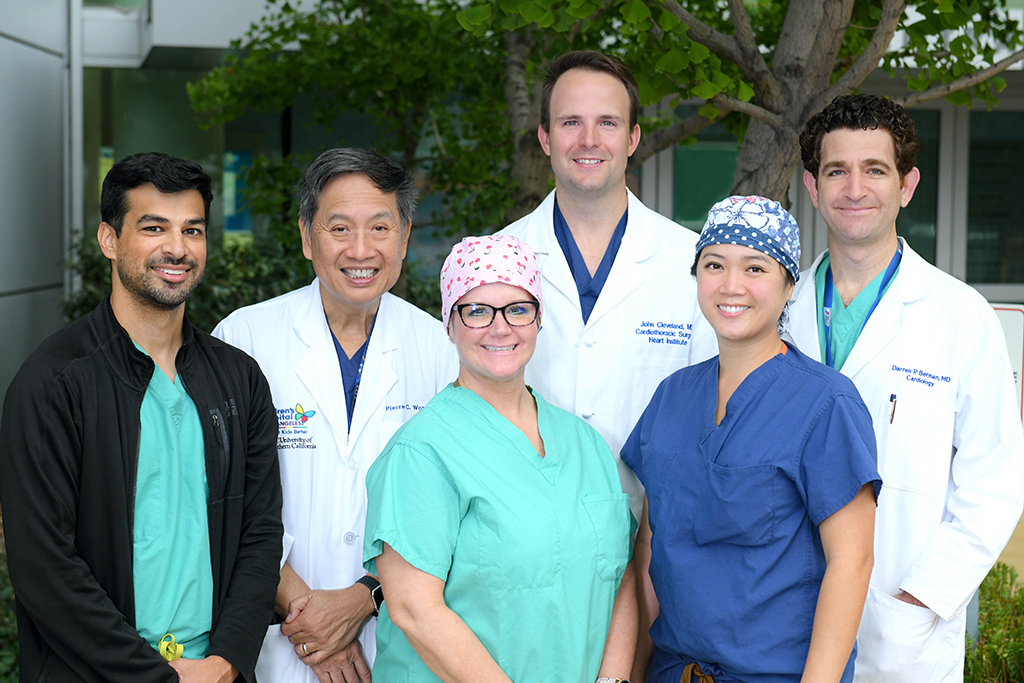 Here’s how the team performed the procedure, which spared a teen from open-heart surgery.

A team at Children’s Hospital Los Angeles recently became the first in the world to use a novel, basket-shaped retrieval device to successfully remove a large right atrial thrombus (blood clot).

The procedure took place in the Cardiac Catheterization Lab and was just the fourth-in-human use for the device, which is made by ŌNŌCOR and received Food and Drug Administration clearance in May. The team also used endovascular snares and electrocautery to excise the clot.

“Traditionally, the only options for these pediatric patients have been watchful waiting or open-heart surgery,” says Darren Berman, MD, Director of Congenital Interventional Catheterization in the Heart Institute at Children’s Hospital Los Angeles. “This was a novel solution to a clinical dilemma that we often face.”

The patient was initially referred to cardiothoracic surgeon John Cleveland, MD, for an open-heart surgery to remove the large, 3-by-2-centimeter thrombus.

But the teen also needed a separate, crucial surgery to treat another condition. An open-heart surgery and the subsequent recovery would result in significant and potentially harmful delays to that other operation.

“We needed the least-invasive solution to remove the clot—one that would not result in a long recovery time,” Dr. Cleveland explains.

He sought out Dr. Berman to discuss the possibility of a catheter procedure. “I immediately thought of this new retrieval system,” Dr. Berman says. “We had been in the process of getting it on our shelves, but we didn’t have it yet.”

Two days later, the device and a sample system to practice with were on his desk. He and Neil Patel, MD—a congenital interventional cardiologist in the Heart Institute—began meticulously planning the novel procedure and the series of steps they would implement.

The instrument is considered a “rescue” tool for percutaneously removing embolized stents or other implants, as well as biologic material, from the vascular system. Its retrieval basket is made of nickel-titanium alloy, a relatively soft metal that allows it to be fully compressed inside a catheter. An endovascular snare is placed inside of it.

“You grab hold of what you’re trying to remove with the snare, and then you advance the basket over it or pull the object into the basket,” Dr. Berman explains. “And then you compress that basket and whatever is inside it back down into the catheter, so you can pull it out of the body.”

This particular case, though, would be more complex. This was not a free-floating object that had migrated from its intended location. It was a blood clot affixed to the wall of the heart.

How the procedure worked

Just three days after Dr. Berman’s initial conversation with Dr. Cleveland, the team was in the Cath Lab, ready to do the procedure. 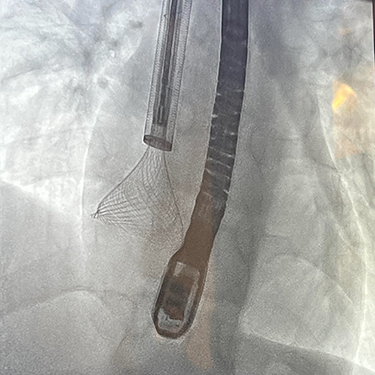 An X-ray image of the ŌNŌ retrieval device inside the heart, during the procedure

First, Cardiac Anesthesiologist Clementine Vo, DO, safely administered the anesthesia to the patient. Next, Echo Cardiologist Pierre Wong, MD, inserted a probe down the patient’s esophagus for a 3D transesophageal echocardiogram (TEE), which would guide the entire process in combination with the Cath Lab’s X-ray system.

Once the TEE had confirmed the exact size and location of the clot, Dr. Berman and Dr. Patel inserted a large catheter into the patient’s neck vein—the most straightforward path to reach the mass.

Under the guidance of the X-ray system and the live TEE imaging, the team wrapped the snare around the clot and advanced the basket device over it. Then, Dr. Berman gently pulled on the clot.

The first big piece came off easily. The remainder, however, was firmly attached to the base of the right atrium—and it was not budging.

But the team had planned for this scenario, preparing to implement a technique inspired by interventional cardiologists at the University of Washington in Seattle. In early August, that group had used the same device to remove a benign atrial tumor in an adult patient—using electrocautery to cut the tumor away from the atrial wall before extracting it with the retrieval tool.

In a similar fashion, Dr. Berman now used a specialized electrocautery snare—obtained from the CHLA Gastroenterology team—to carefully cauterize and detach the rest of the blood clot from the heart.

“The electrocautery was key to detaching the clot—similar to how a GI specialist would excise a polyp from the GI tract,” Dr. Berman explains. “We then used the retrieval tool to safely capture and remove it, without any particulate matter breaking off or embolizing.”

The patient recovered well. Importantly, the teen was then able to undergo the critical surgery needed to address the other condition—without any delay in that schedule.

That success, says Dr. Berman, was a team effort involving not just congenital interventional cardiologists, but also Dr. Vo, Dr. Wong, the Cath Lab team, and Dr. Cleveland and his surgical team—who were standing by during the procedure in case an open-heart surgery was needed.

“This really highlights the incredible collaboration within our Heart Institute,” Dr. Berman says. “With all of us working together, we were able to find an innovative way to tackle this difficult problem and ensure the best outcome for the patient.”