Two Girls Named Genesis and the Day They Got New Hearts 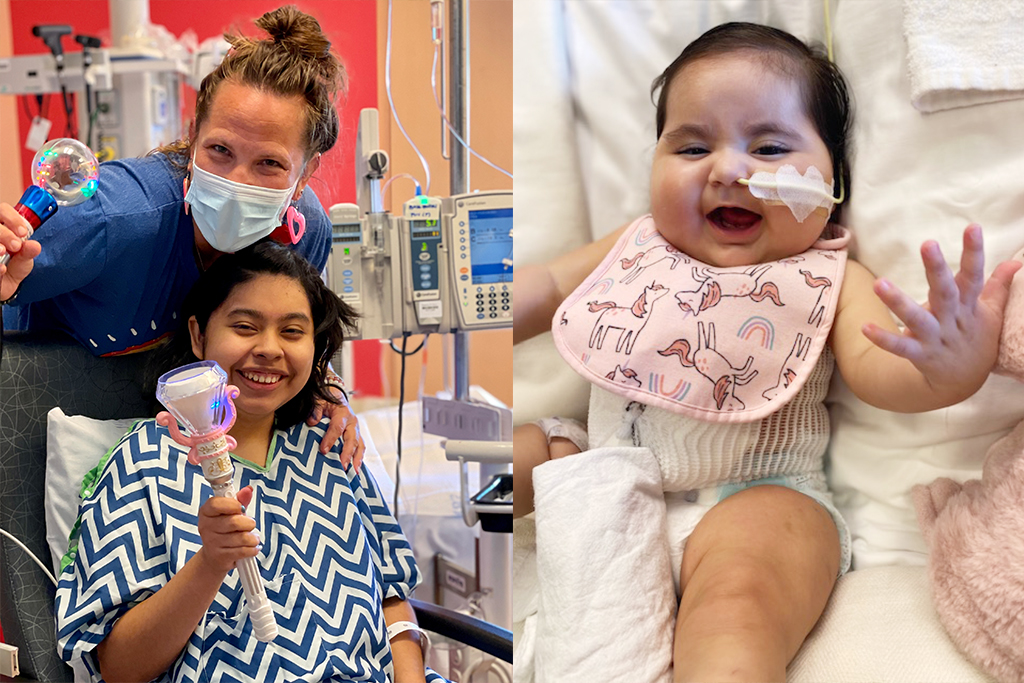 How organ donations and a top-notch pediatric heart care team saved their lives.

Genesis isn’t a name you hear every day. Unless it's your name, and then, chances are, you’d get excited when you met another kid with the same one. But what about another kid in the same hospital? Who also needed a heart transplant? And then got it on the same day you got yours?

Genesis Z. was born in April 2020 and welcomed into the world by her parents, Lilian and Angel, her brother Ethan, 6, and sister Annabell, 9. She seemed perfectly healthy until a routine checkup at 6 months. That’s when Genesis’ pediatrician listened to her heart and noticed the rhythm was abnormal. Genesis was diagnosed with a heart murmur and referred to a cardiologist at Children’s Hospital Los Angeles.

It was at this appointment in December 2020 that Genesis’ parents would learn how serious their daughter’s condition actually was. Her heart was failing. She needed to be admitted to the hospital’s Cardiothoracic Intensive Care Unit (CTICU) that day and put on a waiting list for a pediatric heart transplant.

“When Gen was diagnosed with dilated cardiomyopathy, I just remember hearing that heart breaking news,” says Lilian. “I just couldn’t wrap my head around it. Because to me she seemed completely fine. She was happy, smiling and laughing. She didn’t look sick ... My world had been turned upside down.”

A few months later, a 15-year-old girl also named Genesis was starting to not feel well. Genesis C., a shy girl dedicated to her schoolwork who loves listening to the K-pop band BTS, was tired all the time. Her mother noticed that when they ran errands together, Genesis’ mask was always hanging low on her face.

“I would tell her, ‘Put your mask on correctly,’ and she would say, ‘I can’t breathe, Mommy.’ That’s when I thought, ‘Something bad is happening that she can’t wear this mask,’” says Marisol, Genesis C.’s mother.

Things got worse. Genesis had trouble keeping food down. One day in July, while at home, she complained of a stomachache, began to vomit and fainted. Her parents took her to a nearby emergency room, but were told she likely had a stomach virus and would get better.

After another fainting spell, Genesis’ parents decided to take her to a different emergency department—this time to the one at Children’s Hospital Los Angeles. The cardiology team took images of her heart and found that, like baby Genesis, she was in advanced stages of heart failure. She, too, needed to be admitted to the CTICU immediately.

Baby Genesis and teenage Genesis both entered Children’s Hospital Los Angeles with a poor prognosis. But on Aug. 5, 2021, everything would change. That’s when each girl would receive a donor heart—and a chance for a healthy life.

When a transplant is the only option

The parallels went even further. Both girls needed pediatric heart transplants because they were born with a condition called dilated cardiomyopathy, says Molly Weisert, MD, a pediatric cardiologist in the Heart Institute at Children’s Hospital Los Angeles who oversaw their care.

“They came in with pretty decompensated heart failure and quickly showed they were not going to do well with medical therapy alone,” Dr. Weisert says.

“Imagine your heart is a tennis ball and you need to pump 2 ounces of blood every time you squeeze it,” Dr. Menteer says. “To do this, you have to squeeze most of the contents out. In dilated cardiomyopathy, your heart gets weaker and it can’t pump anything out, so it starts filling with more and more blood and gets bigger. The heart ends up becoming more like a basketball—it doesn’t require much squeezing to pump anything out of it. It just has to quiver a little bit and it’ll pump 2 ounces. By the time people need a heart transplant, their heart is gigantic. It’s struggling to pump just a little bit of blood.”

Both girls would need a mechanical pump called a ventricular assist device, which takes blood from the left ventricle and sends it directly into the aorta, the large artery that distributes blood throughout the body.

“Both girls were so sick we were concerned they weren’t going to be sustained while waiting for their heart transplants. Some kids can wait for months and months before an organ becomes available,” says Luke M. Wiggins, MD, attending cardiothoracic surgeon at Children’s Hospital Los Angeles.

“Nothing prepares you to see your child totally reliant on a machine for survival,” says her mother. “I had done some research and seen pictures before she was placed on the ventricular assist device, but it’s not the same thing.”

“Both of these kids demonstrated a lot of perseverance and strength in getting through difficult first operations before getting their heart transplants,” says Dr. Wiggins.

Because parts of the ventricular assist device extend outside the body and are hooked up to a machine, it requires constant maintenance. It also means children who are on one cannot move much beyond the hospital bed.

The wait for new hearts felt endless for both families.

Teenage Genesis was in the hospital for three weeks before she was matched with a donor. She got through it with lots of text messages and video calls from her three best friends, and the support of her parents, who took turns staying with her in the hospital. Her 12-year-old cousin, Luis, who was also born with dilated cardiomyopathy and received a heart transplant at Children’s Hospital Los Angeles two years before, assured her things would get better.

Some forms of dilated cardiomyopathy are inherited. In the case of teenage Genesis, each of her parents passed down mutated genes that can cause the condition.

“It was really difficult for me and my husband to get the news. It was depressing to know that she would be another person in our family who would need a heart transplant,” Marisol says. 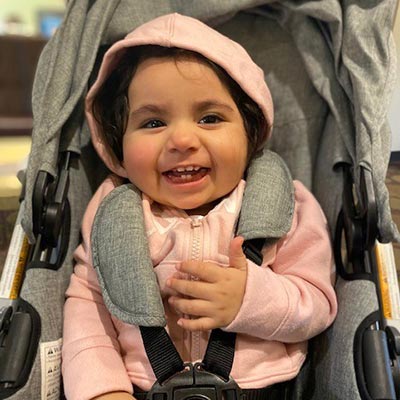 For baby Genesis, the wait was much longer and more complicated. She experienced two strokes while on the ventricular assist device.

“Strokes are one of the most common and feared complications with any ventricular assist device,” Dr. Weisert says. “You’re introducing foreign material into the heart and into the bloodstream, and so anytime there is a plastic material blood is exposed to, it tries to form a clot on it.”

But the nine-month wait for a new heart was difficult on baby Genesis’ family. For about six weeks, Lilian stayed with Genesis at the hospital while her husband and mother-in-law watched Genesis’ siblings. Her husband, Angel, eventually filled in for her a few days a week and she got to see her other two children, whom she’d never been separated from before.

Lilian says it was especially tough to have to stop breastfeeding Genesis when her daughter needed to have a nasogastric tube placed to bring food to her stomach.

“It was hard, but her doctors and nurses made us feel very comfortable. We knew this was the place she needed to be taken care of,” she says.

New hearts for both girls

“The coordinator said, ‘We found a heart for Genesis.’ I said, ‘I know. We talked about this already,’” Dr. Weisert says.
“When she said, ‘No, little Genesis.’ I was like, ‘Oh my gosh, are you kidding me?’ I was making dinner with my daughter and dropped everything and told my husband he had to take care of things.” 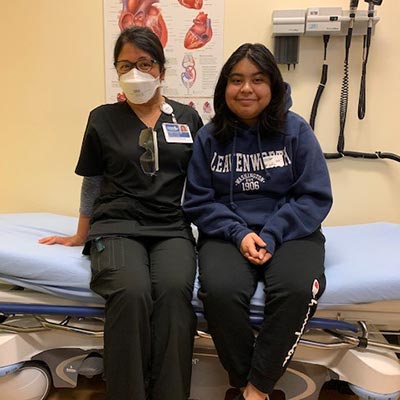 Forget the fact that two girls with the same name and the same disorder would both be getting hearts on the same day. Simply getting two organ donations in one day is unusual. Some hospitals wouldn’t even be able to do it.

“It is very uncommon to get two donors in a 24-hour period. We’re lucky to have surgeons and enough doctors that we can scale up for that kind of thing,” Dr. Menteer says.

Dr. Wiggins, who operated on both patients—performing the ventricular assist device placement on teenage Genesis and the heart transplant on baby Genesis—says both transplantations went smoothly. This was despite the operation being more complicated for baby Genesis, since very young children often have a lot of scar tissue that remains after a ventricular assist device is removed.

Both girls are home now and recovering from their surgeries. For the rest of their lives, they will have to take daily medications that prevent their bodies from rejecting the new hearts.

“Once children recover from a heart transplant, the expectation is that they can return to day-to-day life. They can go to school, play sports, participate in whatever extracurricular activities they like,” Dr. Weisert says.

Marisol says she looks forward to seeing Genesis healthy again. “I hope one day she’s able to go to college, prepare herself for the world, and is happy and active,” she says.

As for baby Genesis, her brother and sister couldn’t believe how big she was after seeing her for the first time in nine months. At home, Lilian is helping Genesis learn to roll and sit up because her usual baby milestones were disrupted while being confined to a hospital bed.

“I can’t stress enough how much we are grateful for the opportunity that came to us, and for all the people we met at CHLA,” says Lilian. “The doctors, nurses, surgeons, transplant coordinators and the Child Life specialists helped us through the biggest hurdle life could throw at us!”