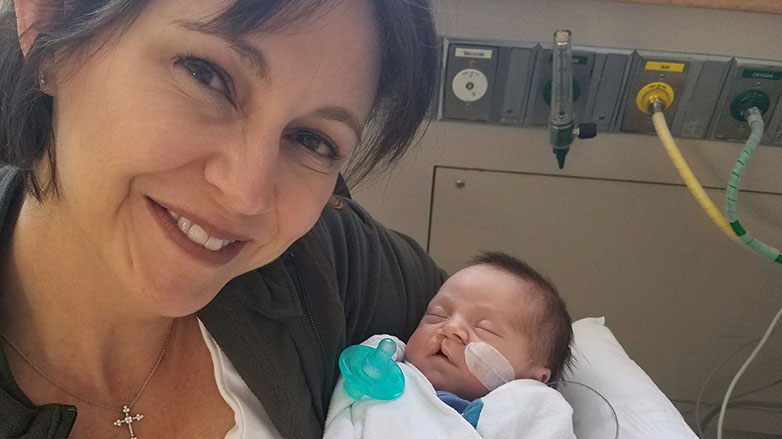 Sentimental was not how Lauren expected to feel upon seeing her son, Max, for the first time after his cleft lip surgery. She was astounded by the repair job William Magee, MD, DDS, had performed. The only visible leftover was a patch of bumpiness on the gum behind where the cleft used to be.

Yet something Dr. Magee warned her about had materialized: She missed the cleft. That seemed odd. Why would you miss your child’s deformity? Answer: Because she had stopped seeing it that way. It wasn’t an abnormality or an imperfection, or even a blemish. As far as Lauren could see, it wasn’t even there.

“The parents get used to it,” says Dr. Magee, a craniofacial surgeon at Children’s Hospital Los Angeles. “It just starts to disappear. When they look at their baby, they’re not like, ‘Oh my god, look at the hole!’ They’re like, ‘Look at his beautiful eyes!’ You have to prepare them for almost a new child, because they can be sad for a moment. They miss that unique feature that made him special.”

Lauren found he was right. She felt a vacancy. “It was like that part of him had passed on,” she says. “You grieve that sweet phase you just experienced because you know time is moving on and your child is moving on.”

Still, those twinges of remorse were overridden by her amazement over Dr. Magee’s reconstructive work. “We were just stunned,” Lauren says. “We could not believe what he had done.”

In a proper telling of the story, that would form the ending, but this is a narrative better delivered out of order. The traumas unfold in such preposterous and dreadful succession, it may keep you from ejecting early if you know in advance that everything ends well for the patient and family. They and their possessions come out intact, though Lauren says the same can’t be said for her perspective, which was altered irreversibly, even if she is not able yet to say how.

“It all happened so fast—your worst nightmares all at once. It’s just now hitting me in some ways.”

“I had zero worries,” Lauren says.

Nor had she reason for any. Dr. Magee had taken a look at her ultrasound and she and her husband, Marco, felt relieved and assured. They had come to see him on the day after Labor Day, 2018, a week after Lauren’s OB-GYN found that her 27-week fetus had a cleft lip. A neonatologist confirmed the defect and suspected he saw a cleft palate as well. 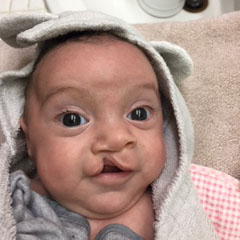 Lauren left Dr. Magee convinced he was as advertised. “Everyone had said he was the man,” she says.

Through his work at CHLA and for Operation Smile, an organization devoted to correcting facial disfigurements in poorer populations throughout the world, Dr. Magee has done countless cleft lip and palate procedures and has sewn up clefts of gruesome severity. He classified Max’s as merely “moderate.” He told Lauren and her husband to return after Max was born, which would put them back in his office sometime after her Nov. 30 due date.

“When we met with him,” Lauren says, “it was an overwhelming, ‘Oh yeah, he’s it.’ It was clear that his experience and knowledge were the best in the world.

“He had done so many of these, it’s like a musician who can play an instrument blindfolded. He knows how to meld these faces back together. I came away with the conviction that I would leave the whole situation satisfied, knowing we had given our baby the very best chance for reconstruction.”

From sad to worse

Nov. 8 was hardly a half-hour old when Lauren received a call at home from her boss. “There’s been a shooting at the Borderline,” he told her, “and we’ve got students there.”

A key piece of her job as the head of Human Resources at Pepperdine University is emergency response planning, so although Lauren was on maternity leave at the time, her boss knew she would want to be involved. A little more than an hour earlier, a mass shooting had occurred at Borderline Bar & Grill in Thousand Oaks, a popular spot with area college students, including those at Pepperdine in neighboring Malibu. Sixteen Pepperdine students were at Borderline that evening.

Lauren spent the night on the phone with colleagues drawing up a plan for the next day. In the morning they got word that one of their students was among the 12 fatalities. She and her team had drilled so many times for this scenario, and here they were helpless when it struck.

“Even though she wasn’t on our campus when this happened,” Lauren says, “we all felt like we had failed her.”

One freeway exit over from Borderline was the community hospital, where Max had been in the neonatal intensive care unit (NICU) since Oct. 19, born six weeks early and with a string of health issues: a hole in one lung, a grade-1 brain bleed, an infection, anemia. None were unusual for preemies, but all were serious.

Lauren visited him daily; this time when she arrived, the hospital was teeming with security and media. The shooting victims had been brought there, including a Ventura County Sheriff’s sergeant who did not survive. Lauren was in the lobby as the processional carrying the officer’s body left the hospital. All the doctors and nurses came outside in tribute.

It was more than Lauren could bear, so she left to get something to eat, determined to indulge. With the world fraying, it was no time for portion control. She drove to a pizzeria and entered wearing her hospital visitor sticker. Figuring Lauren was a family member of one of the shooting victims, the girl behind the counter told her she would get a discount. Lauren told the cashier she was mistaken, but she wouldn’t hear it.

“I’m arguing with her: ‘Please, no. Don’t give me a discount. I’m not one of those poor people,’” Lauren says. “She said, ‘No, I will give you the discount,’ and she wouldn’t leave it alone.”

Lauren finally caved. “She gave me 20% off the pizza. I felt like I was cheating.”

It was a darkly comic pause in a day that was about to go from sorrowful to apocalyptic. Later in the afternoon, driving away from the hospital to pick up her daughter at school, Lauren saw curls of smoke on both sides of her. She thought little of it, though, as brushfires were common to the area. She presumed firefighters would make short work of them. That evening, back in her home at the base of Malibu Canyon, she began hearing from friends asking how she would get to the hospital the next day.

“I thought, ‘What are they talking about? It’s Thousand Oaks. The roads don’t close over there. They’re going to knock this fire down. It’s going to be fine.’”

‘Tell mommy when you see a fire’

Within hours, all of the Conejo Valley—a region that extends through southeastern Ventura County and northwestern Los Angeles County—was being evacuated, and the fire was steering toward Malibu. Lauren and her husband got their two daughters, loaded up both cars and left for Pepperdine, about a half-mile from their home, where they are instructed to take up shelter in these circumstances. It was Friday morning, only 36 hours since the Borderline shooting.

Lauren moved to Malibu in August 1993, “so I’d done this a bunch of times,” she says. “We had never faced a fire like this before.”

They had not been at Pepperdine for long before Marco came into the school’s Emergency Operations Center and asked to see his wife. “I thought, ‘That’s weird. What’s this about?’ I leave and he tells me, ‘We just got a call from the hospital. They’re evacuating the babies.’ That put me into shock.”

They raced out to get to Malibu Canyon Road before it closed, fearful of being trapped behind. Lauren took off toward West Hills, where Max was being taken to the local hospital.

She drove out, flanked by fires against the hillsides and in the meadows beside the road. Hoping to keep her daughters distracted, she created a game with an appropriately grisly title: “Who Sees the Next Fire?”

“I said, ‘You tell mommy when you see a fire,’” Lauren says. “They were fire spotters. There was fire all around us.”

She reached West Hills, dropped the kids off with friends and spent the day with Max in the hospital’s NICU. The next task was to find somewhere to stay the night. Her husband found a hotel in Sherman Oaks, the last vacancy within 50 miles. They were ready for a measure of normalcy, which meant pancakes for breakfast the following morning. As they were heading out, those plans were undone.

“We get a call from Children’s Hospital Los Angeles, from someone we don’t know,” Lauren says. “He says, ‘I’m part of the Emergency Transport team and we’re going to be moving Max to Children’s, and I need to talk to you about it.’” The fire was moving toward West Hills and there was a smoke issue in the NICU. “So we forget the pancakes.”

Lauren took some solace in knowing that at least this time she could ride in the ambulance with Max as he transferred hospitals.

“Then I hear a nurse say in passing, ‘Air ambulance,’ and I think, ‘What? What?’ I have a total phobia of small aircraft. Helicopters, small planes. I don’t ever want to go in one.”

She passed on the one shot she had—the opportunity to do a flyover of Pepperdine in a sheriff’s helicopter. But here she didn’t have the option to be timid. When the CHLA team arrived and began to load Max, Lauren followed and buckled herself in. She stayed calm by focusing on all the busyness going on around her, on details such as what the crew members were wearing and how they were handling her son.

She also had her own internal dialogue to occupy her. “I started thinking about all the parents who had sat in that spot in the helicopter where I was sitting,” she says. “The idea that this helicopter carried the most precious cargo, these innocent children who are helpless—that just nailed me right in the heart.”

It was a thought that extended to what she saw a short time later, after she touched down at CHLA and caught a glimpse of the helicopter as it lifted off the hospital’s roof. On the bottom of it was one of those big yellow triangles that announced the aircraft’s most notable passenger, while also making sure others knew who had the right of way: “Baby on Board.”

COMING MONDAY: In Part 2, the family moves five times in eight nights while waiting to see if the fire will spare their home, and Dr. Magee finds an extra benefit to Max’s surgery.