A Pair of Daring Heart Procedures Save Preemie Alex’s Life 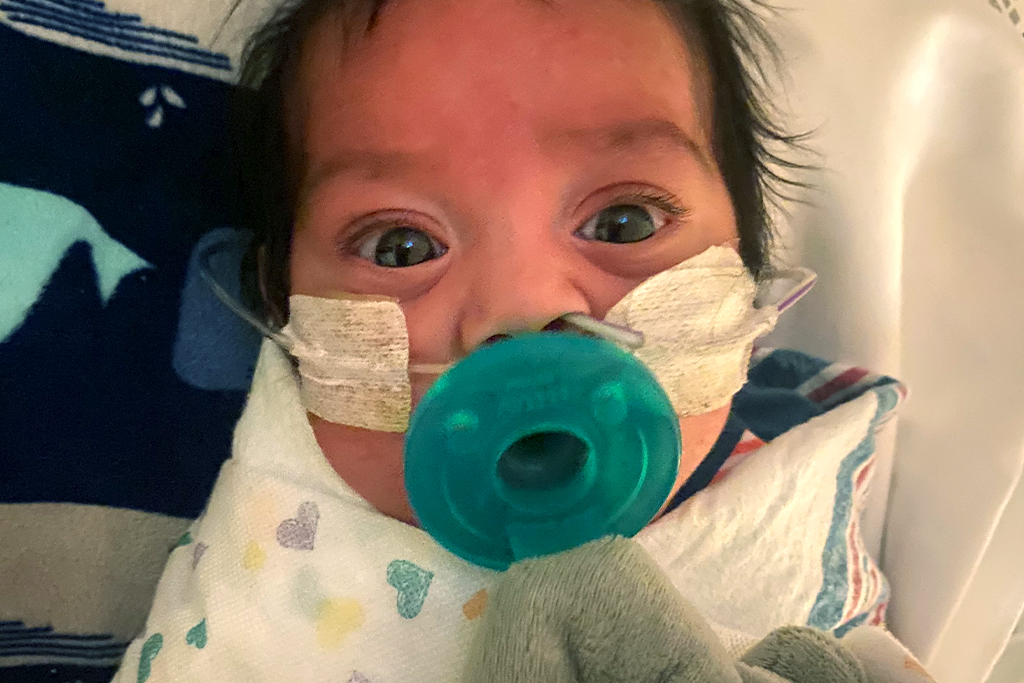 Combining expertise with ingenuity, a team of cardiovascular specialists fixes a rare birth defect in a premature baby.

Sarah Badran, MD, knows her audience. “Let me know if I lose you, all right?” she says.

An interventional cardiologist at Children’s Hospital Los Angeles, Dr. Badran starts into a plainspoken description of blood circulation that she keeps for the layperson, whether an anxious parent or an easily baffled writer.

She calls on it here to illustrate the birth defect that led her to perform a virtually unprecedented cardiac catheterization procedure on tiny Alex, born Oct. 26, 2020, at 26 weeks with his lungs unattached to his heart, creating a disrupted blood flow that threatened his life.

She begins with a familiar association to explain how one’s blood moves oxygen from the lungs out to the body: “The blood is like an Uber driver,” Dr. Badran says. By the time she finishes, Alex’s disorder is understood and ready for retelling.

In normal circulation, the lungs load the blood with oxygen and send it through the pulmonary veins to the heart’s left atrium, and then out to the body’s organs through the aorta. Then depleted of oxygen, the blood returns to the right side of the heart before getting pumped back into the lungs, and the whole circuit repeats. Before birth, this exchange is formed anatomically, as the pulmonary veins become anchored to the back of the left side of the heart.

In rare instances—1 in 10,000 births—that attachment doesn’t develop. The pulmonary veins “just get lost,” Dr. Badran says, draining the blood out elsewhere within the body and leaving it without any road back to the heart, a birth defect called total anomalous pulmonary venous return (TAPVR).

“What generally happens is, you have a beautiful little baby, they're born, and then they turn completely blue. That’s usually a big, big emergency.” 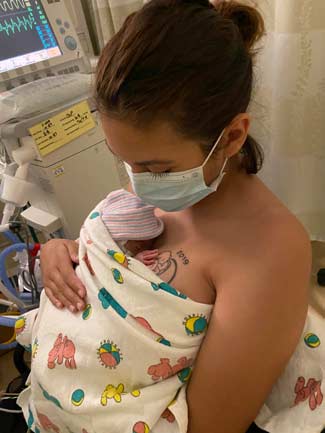 Alex’s mother, Alejandra, cradles her son each day at Children’s Hospital Los Angeles, where he continues to receive care.

To the liver and back

The condition is not easy to see on a prenatal scan because fetal circulation doesn’t involve the still-developing lungs, but instead draws oxygen from the mother’s placenta, so blood flow tends to appear fine.

Alex’s abnormality wasn’t discovered until a week after he was born, when his breath began to grow short. An echocardiogram revealed he had TAPVR and that his pulmonary veins were depositing blood into his liver. The diagnosis got him transferred to Children’s Hospital Los Angeles.

Alex’s blood, however, was managing to return to his heart through a blood vessel located in the liver called the ductus venosus. The same vessel is employed in utero, though that’s by nature’s design, as it passes oxygenated blood to the heart after receiving it from the umbilical vein, which extends out of the placenta. Shortly after birth, that ductus venosus typically closes off and a new breathing apparatus, led by the lungs, takes over.

The irregularities caused by prematurity may have saved Alex, as his ductus stayed partially open, allowing blood to stream through it and reach his heart. Once there, the blood would pass from the right to left chamber through a hole called the patent foramen ovale, and then, freshly oxygenated, flow out to the body.

“It was a wackadoodle circulation,” Dr. Badran says, “but that's how he was staying alive.”

The one chance to save him

That passage through the ductus venosus, however, was on its way to sealing shut, so some intervention had to be made. Dr. Badran and her colleague in CHLA’s Heart Institute, Neil Patel, MD, discussed next steps with cardiothoracic surgeon John Cleveland, MD, who would do the open-heart surgery that Alex needed to fix his congenital defect. They agreed that the operation was too risky for a baby so unstable.

The safer option was to wait until Alex developed more, as close to full term as they could get him, before Dr. Cleveland would operate. In the interim, the plan was for Dr. Badran and Dr. Patel to put a stent into the ductus venosus to keep it open so it would continue to convey blood to Alex’s heart.

That decision meant Dr. Badran and Dr. Patel were faced with trying something that, according to Dr. Cleveland, had only been done a handful of times worldwide, and never at Children’s Hospital: stenting a ductus venosus in a premature baby. The procedure is so unusual because TAPVR, as uncommon as it is across all births, is hardly ever reported in preemies.

“A premature infant with total anomalous pulmonary venous return—I can't even put a number on it,” Dr. Cleveland says. “It's that rare.”

Dr. Badran and Dr. Patel were unfazed. They were confident they could apply fundamental techniques and their accumulated expertise to an entirely new predicament.

“The thing about pediatric interventional cardiology is that it's always like that,” Dr. Badran says. “Everything is so rare we're always kind of engineering our way through these types of situations. I know everything I need to know about premature babies, and I teach embryology in med school. I know everything there is to know about the ductus venosus system, blood flow, and what the vessels are like, how they’re shaped, and why they close and why they open.

“The only chance to save Alex was to try to stent this open, which would not be fixing the problem. It would just basically be making it like he hadn’t been born yet.”

The day after the determination was made to try to install a stent, Alex’s blood pressure and oxygen levels began to fall, signs the ductus venosus was closing. The doctors were compelled to move Alex, only 17 days old, into the catheterization lab. Dr. Badran recounts the delicacy of the procedure—and exults over its success.

“To take this tiny little person,” she says, “and put an IV in his neck vein and try to find this threadlike thing, thinner than a wire—we almost couldn't find it—then stretch it with a balloon and put a stent in, it was a technical tour de force. It worked, and it stabilized him.”

He was stabilized but not safe, and would spend the next several weeks watched by neonatologist Jennifer Shepherd, MD, in the Steven & Alexandra Cohen Foundation Newborn and Infant Critical Care Unit. “When I heard we were getting a baby who was 26 weeks with obstructed infradiaphragmatic TAPVR,” she says, “my first thought was: How are we going to keep him alive? It just was unheard of.”

As they worked to maintain Alex’s circulation until he reached an age and a weight suitable for surgery, Dr. Shepherd and her team had to respond to any unfavorable movement in his oxygen levels or blood tests. “We had a very low threshold to get echocardiograms to make sure that stent was still open.”

Alex made it to 37 weeks in gestational age, but not without needing more time in the cath lab to keep the stented area from closing. At 37 weeks, imaging showed the ductus venosus was again narrowing, so on Jan. 5, Dr. Cleveland brought Alex to the operating room to establish a connection between his lungs and heart. Though Dr. Cleveland had done the procedure often, Alex’s size—still only 4 pounds—added to the risk. 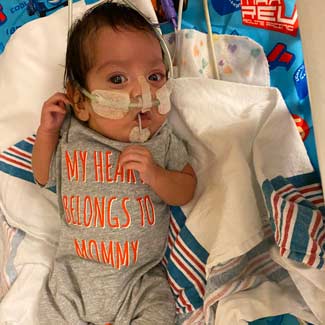 “Repair of total anomalous pulmonary venous return is a routine operation; we probably see six or seven cases a year,” he says. “There's just less room for error when children are that small.”

With Alex on the bypass machine and his body cooled to about 65 degrees Fahrenheit, Dr. Cleveland removed his heart from his chest and began the repair. He tied off what he calls the “anomalous pathway,” the ductus venosus that had kept Alex’s blood flowing, then sewed the pulmonary veins to the back of the left atrium, where they should have originally attached. He set Alex’s heart back into his chest, warmed his body up and returned him to intensive care.

“Everything went well,” Dr. Cleveland says. “The goal of the operation was to restore normal anatomy, which we did.”

Follow-up scans have all looked good. With Dr. Patel staying on as Alex’s cardiologist, Dr. Cleveland expects his work has ended. “He'll get echocardiograms because that's part of the deal, but this should be the only heart operation he needs for this condition.”

It’s not often that open-heart surgery on a newborn is the postscript, but while it culminated Alex’s heart repair, what set it apart was the opening act. Stenting the ductus venosus on a preemie that small was not merely delicate but untried.

“From my review of the literature, nobody else in California had done it,” Dr. Cleveland says. “I think it was a California first.”

While exhilarated by the achievement, Dr. Badran saves her strongest, lengthiest accolades for the efforts of the anesthesiologists and the neonatologists and other support staff, “the village that it took,” she says, to keep Alex intact so she and Dr. Patel could do their work.

"To transport such a tiny baby, that sick, get him safely on the cath lab table without dislodging the breathing tube, and give him the right medications, and the way the nurses and the techs all coordinated, and hospital maintenance heating up the cath lab to 82 degrees to make sure he wouldn't get cold—they somehow managed to keep him alive while we found that vein.

“We had stented tiny things on lots of babies," she says, "getting into small little blood vessels and opening them, but the amount of cooperation and collaboration between all the divisions, it was just a beautiful orchestration of teamwork.”