Leah and Her Fragile Lungs 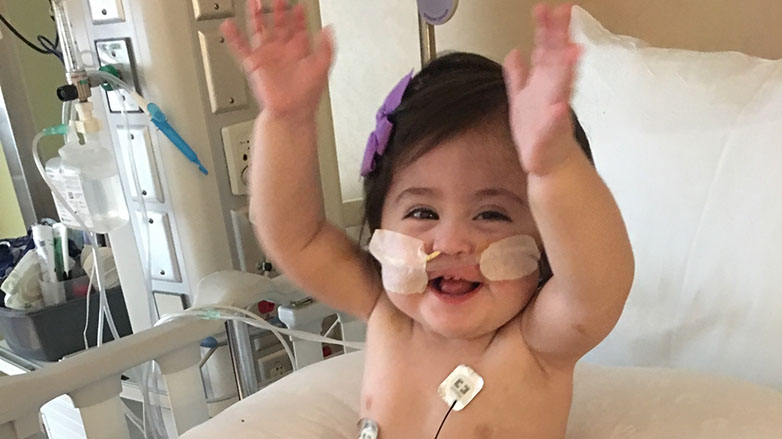 Leah found a new future at Children’s Hospital Los Angeles, which offers the most advanced care for the tiniest patients and their mothers, even before birth.

Because Leah was too sick to go the Operating Room, the Operating Room came to her — an entire multidisciplinary team of pediatric specialists were there to help the newborn baby, including neonatologists, surgeons, anesthesiologists, neonatal nurses, ECMO specialists, and specialists in neurocritical care, nephrology, radiology, cardiology and pulmonology.

They had all assembled because Leah was born with a congenital diaphragmatic hernia (CDH), a condition that occurs in about 1 in 2,500 births when the diaphragm does not develop properly during gestation and some or all of the abdominal organs move into the chest. In the majority of cases, the cause is unknown.

A thin sheet of muscle, the diaphragm plays an important role in breathing. It also acts as a barrier between the abdomen and the chest.

CHLA’s specialists in neonatology and pediatric surgery had been aware for months that Leah’s case was serious. Her diaphragmatic hernia was on the right side. About 15 to 20% of CDH babies are “right-sided,” and they have a poorer survival rate.

Leah’s liver, small intestine and colon had gravitated up from her abdomen into the space where her lungs normally would have plenty of room. The result: her lungs were underdeveloped and she had extreme pulmonary hypertension, a life-threatening type of high blood pressure in the lungs that is commonly seen in babies with CDH. 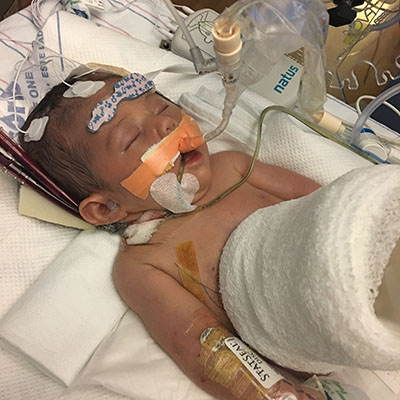 Shortly after birth, Leah was placed on a heart-lung bypass machine, to give her heart and lungs a chance to rest while their work was handled by an external system known as extracorporeal membrane oxygenation, or ECMO.

“ECMO is able to help meet the baby’s needs in the short term by providing oxygen, removing carbon dioxide and supporting the heart while we optimize the management of their small lungs and pulmonary hypertension," says Rachel Chapman, MD, Medical Director of the NICCU and Associate Chief, Division of Neonatology.

Not all babies with CDH need ECMO, but at CHLA, those who do are cared for in the largest program of its kind in California. CHLA’s ECMO Program has provided lifesaving care to more than 1,200 children since the program’s inception in 1987. In addition to neonatologists with expertise in neonatal ECMO, an ECMO specialist keeps watch 24/7 by each young patient’s bedside.

What Leah's primary surgeon, Juan Carlos Pelayo, MD, saw as he began her surgery complicated the task ahead. Many babies with CDH have a hole in their diaphragm that can be sewn closed. Others have a rim of diaphragm. “Leah had no diaphragm at all,” says Dr. Pelayo. “No separation between her abdomen and her chest. Only ribs.”

Waiting nervously outside the NICCU were Leah’s parents, Noemi and Jack.  They thought about how happy they had been to learn they were having a third child. They were hoping for a girl to join their two boys, but they had held off finding out the gender.

Then, at a routine checkup in her fourth month, Noemi’s doctor said there was a problem. The couple had never heard of a congenital diaphragmatic hernia. “It sounded very scary,” says Noemi. In the parking lot afterward, they prayed together and decided to open the envelope with the test results and the gender. They both cried. Their much-wanted baby girl was already gravely ill.

They knew instantly what they had to do next. “I wanted to go to Children’s Hospital Los Angeles,” says Noemi, “because I knew she’d get the best care.”

Within a day, the family was taken under the wing of CHLA’s Fetal-Maternal Center (FMC), one of only a handful of comprehensive maternal and fetal diagnostic and treatment centers in the nation. The FMC is part of CHLA's Fetal and Neonatal Institute, which is co-directed by Philippe Friedlich, MD, MSEpi, MBA, Chief of the Division of Neonatology, and David Miller, MD, Chief of the Division of Maternal-Fetal Medicine. 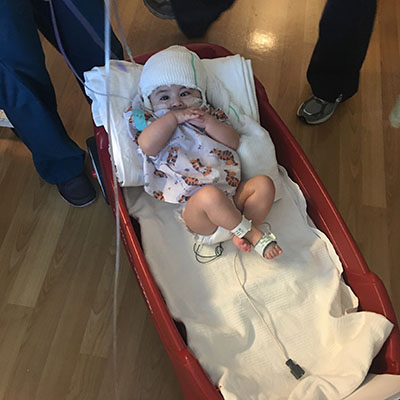 For the next five months of her pregnancy, Noemi’s health, and that of their unborn baby, would be overseen by fetal, maternal and neonatal specialists.

“Essentially, we were getting to know Leah even before she was born,” says Dr. Chapman.

The team immediately began outlining a detailed delivery plan. Everyone who needed to know about Leah’s imminent arrival was alerted.

On Dec. 2, 2016, Leah was delivered at Hollywood Presbyterian Medical Center.

“I got to hold her hand for a few minutes,” recalls Noemi. Neither mom nor dad could cuddle their sick newborn. Instead, members of CHLA’s highly trained Emergency Transport team whisked her via ambulance next door to the NICCU, which is designated Level IV, the highest level available, because it can provide the most acute care and surgical repairs of complex congenital and acquired conditions.

Leah’s condition was critical, but stabilized with the support of ECMO. Two days later, Dr. Pelayo applied a synthetic patch to substitute for Leah’s missing diaphragm. He eased her intestines back into place in the abdomen. However, her liver was too large to fit into a belly that had grown flat instead of round like a healthy baby’s. The liver would remain outside the abdomen, covered by an acellular porcine skin-derived patch that would allow healing over the organ.

Leah survived it all. “I call her our ‘miracle baby,’” says Dr. Pelayo.

Fixing the diaphragm was critical, but the biggest challenge in managing CDH is in supporting the baby's fragile lungs and minimizing complications through consistent, multidisciplinary care both in the NICCU and throughout the child's early years.

Watching over the breathing capabilities of Leah and other CDH babies are CHLA's highly trained pediatric pulmonologists.

"These babies' lungs still have the potential to grow, but they often face lifelong problems," notes Cheryl Lew, MD, attending physician in the Division of Pulmonology and Sleep Medicine. "We want to make sure each child has the optimum opportunity for good lung health." 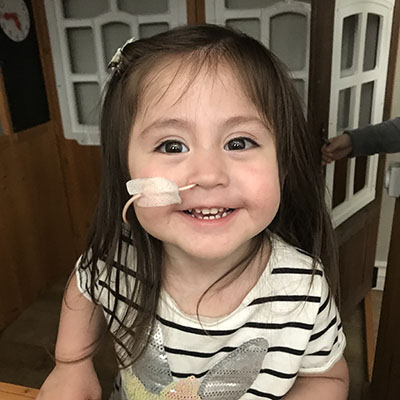 Leah's stay in the NICCU would eventually stretch to 218 days. Within two weeks of her surgery, she no longer needed ECMO, but continued on a ventilator and a feeding tube. On Leah’s 1-month birthday, Noemi was able to hold her for the first time. “It took two nurses handling the tubes still attached to Leah for my wife to do that,” recalls Jack.

Leah was weaned from the ventilator over the next two to three months. When she turned 4 months old, her older brothers, Eli, then 8, and Levi, then 6, finally got to meet their baby sister at CHLA. The boys wore T-shirts with “Team Leah” across the front. “They were so excited to see her,” says Noemi.

A multidisciplinary team of pulmonology specialists, respiratory therapists and nurses began preparing the family to go home together to Montclair with the knowledge to care for Leah's oxygen and feeding needs.

In July 2017, at age 7 months, Leah left the NICCU for a short stay on the hospital’s fifth floor. Her father recalls how the NICCU nurses lined up to say goodbye and usher Leah to her new life. “They’re our family now,” he says.

Leah has had mostly ups since then. Last December, she celebrated her second birthday at Disneyland.

Babies with CDH are at higher risk for feeding difficulty and developmental delays. Leah is undergoing physical and occupational therapy, and her growth and development are being monitored by CHLA’s Newborn Follow-up Program.

Leah skipped crawling and went straight from “butt-scooting” to walking. Now she is running all over the house and playing with her brothers. Meanwhile, her parents are spreading the message about CDH to other parents.

Noemi and Jack also tell the families they meet that CHLA is the place to find the best care for your child. “They do this work with their hearts,” says Jack.

“They saved our daughter’s life,” adds Noemi. “We can never be grateful enough.”