On Her First Birthday, Julie Has a Lot to Smile About 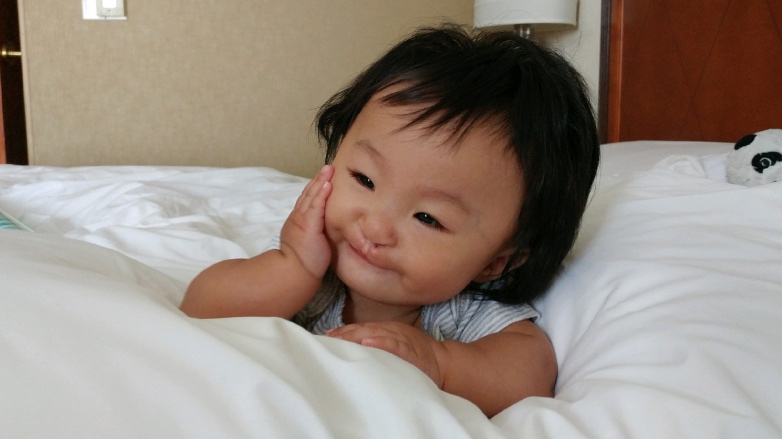 Julie’s mom, Christina Osumi-Cabaya, froze. “I looked at my husband and said, ‘Did he just say that? No. Double-check.’”

But it was true. Soon, Julie was whisked away; Christina only got a chance to see her daughter for a moment.

“I saw this precious baby, and at the same time, I saw this big gaping hole in the front of her face,” she recalls. “I felt devastated. I was overwhelmed because I didn’t know what this was going to mean for her.” 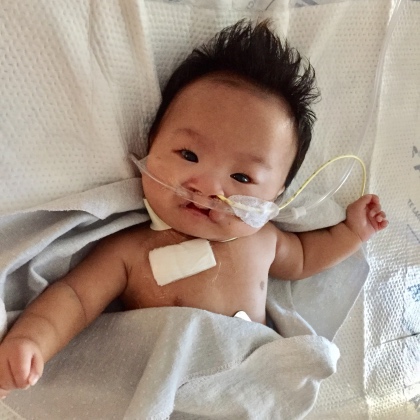 Julie’s cleft lip and palate—openings in the lip and roof of the mouth—were severe and on both sides of her face. Still, they were only the start of the challenges the tiny newborn would face.

Her first night in the hospital, she briefly stopped breathing. By the next evening, Julie—who was born six weeks early and weighed just 3 pounds, 14 ounces—was being transferred to Children’s Hospital Los Angeles and admitted to the Steven & Alexandra Cohen Foundation Newborn and Infant Critical Care Unit (NICCU).

At CHLA, Julie’s parents—Christina and her husband, Walter Cabaya—learned that their daughter had been born with Pierre Robin sequence, a constellation of different birth anomalies affecting the head and face.

The most urgent of these conditions was not her cleft lip and palate, but something called micrognathia (an undersized jaw). Although milder cases of micrognathia can resolve on their own as a child grows, Julie’s too-short jaw was causing her tongue to fall too far back in her mouth and obstruct her airway, making it difficult for her to breathe.

Traditionally, Julie would have needed a tracheostomy. But more than a decade ago, CHLA was among a handful of institutions nationwide to pioneer an alternative: neonatal mandibular distraction.

In this procedure, surgeons made cuts in Julie’s jaw and inserted an internal device. The device then stretched her jaw over the next several weeks before being surgically removed.

“As we move the jaw forward, the tongue moves forward too,” explains Jeffrey Hammoudeh, MD, DDS, FACS, director of the Jaw Deformity Center in the Division of Plastic and Maxillofacial Surgery at CHLA, which specializes in neonatal surgery. “That opens up the airway space and allows her to breathe.”

With her parents by her side nearly 24/7, Julie spent the first three months of her life in the NICCU.

“I don’t think she would have made it without Children’s Hospital,” Christina says. “We had every specialist under one roof coming to see her. And those nurses in the NICCU—they’re so on top of it.”

“I try to support the parents as much as possible,” Mundall says. “Sometimes it’s just listening to them and letting them talk and vent. Julie’s parents were so involved in her care. The babies do so much better when that’s the case.”

When Julie finally went home on Dec. 12, 2016, Christina and Walter were thrilled but terrified. Their fragile baby was on oxygen and medicines and needed to be fed every three hours through a G-tube.

There were other challenges, too. Bringing their baby out into the world—cleft lip and all—elicited a range of reactions. At Target one day, another mom peeked in Christina’s stroller and shrieked, “Oh my God, what did you do to her?”

“Mind your own business,” Christina fired back. “And I hope your child doesn’t turn out as rude as you.’”

Although doctors assured her she didn’t cause Julie’s condition, she admits she felt bad at times.

“I didn’t have that picture-perfect baby everyone was expecting,” she explains. “I’ve had my share of days when I cried and felt guilty. Then I’d be like, ‘Hey, snap out of it. She’s getting stronger every day. We’re doing the best we can.’”

At age 6 months, Julie went back to CHLA, where Hammoudeh repaired her cleft lip. Although that’s a standard age for this surgery, in many cases CHLA can now repair cleft lips when a baby is much younger. 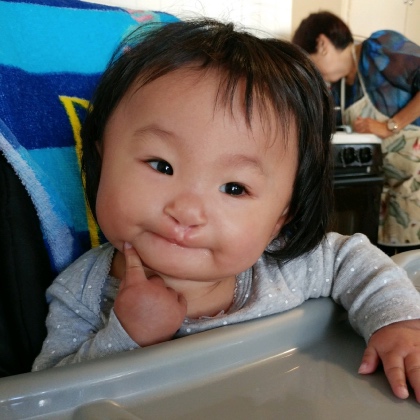 “We’re the only institution in the United States giving patients the option to have the cleft lip repaired at 2 weeks of age,” says Hammoudeh. He and his colleagues are completing a clinical research study on neonatal cleft lip repairs, which found that early repairs are safe and yield superior results.

Because of her shortened jaw and breathing difficulties, Julie was not a candidate for early repair, but her surgery was a huge success.

“She looks like a completely different baby,” Christina says.

Since then, Julie has had a surgery to repair her hip, which was displaced because of her breech position in the womb, and in a few months she’ll have her cleft palate repaired. As she grows up, she’ll also need corrective jaw surgery, orthodontic surgery and speech therapy.

That sounds like a lot, and it is, but Julie takes it all in stride. With her first birthday party coming up, Julie can’t stop smiling—especially if you give her a high-five or start a game of peek-a-boo.

“Those are her big favorites right now!” her mom reports. “She’s the happiest baby. She claps her hands, she waves at people, she babbles and sings.

“Coming up to her first birthday, we’ve thought about everything she’s gone through,” Christina adds. “She’s such a joy, and she’s so much fun, and I keep thinking, ‘We wouldn’t have this if it hadn’t been for everything Children’s Hospital did for her.’ We’re so grateful. We really can’t say thank you enough.”