Elliott’s Total Eclipse of the Heart 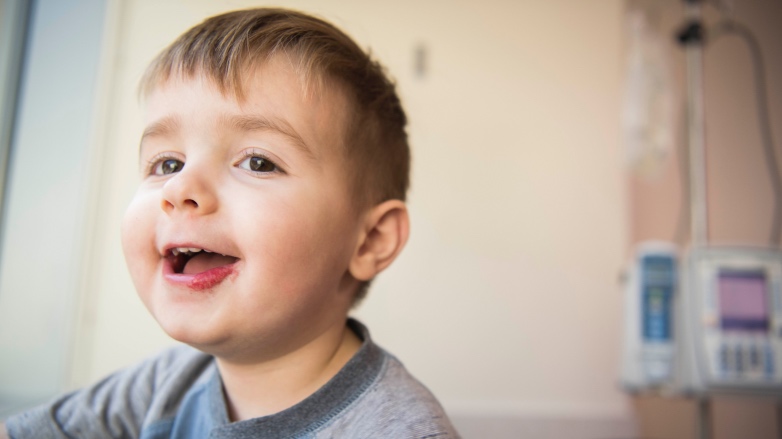 On the morning of Aug. 21, 2017, a nurse brought a special gift into 2-year-old Elliott’s room at Children’s Hospital Los Angeles: a pair of eclipse glasses.

It was the day of the much-anticipated total solar eclipse—the first in nearly a century to be visible across the mainland United States. “There was a lot of excitement in the hospital, a lot of energy,” remembers Elliott’s mom, Raquel. “Everyone wanted to see this crazy eclipse.”

So around 10 a.m., Raquel headed downstairs alone, special glasses in hand, to the hospital’s Sharon D. Lund Reflection Garden, a tranquil spot with soothing water veils that had become her sanctuary over this long, impossibly hard summer. And as she watched the silhouette of the moon slowly converge with the sun, blocking 70 percent of the daylight, she made a silent wish—a prayer, an affirmation, a plea:

“I want Elliott to receive his donor heart today.”

Out of the blue

Just three months earlier, Raquel and her husband, Travis, couldn’t have predicted in a million years that they’d be at CHLA for this eclipse. 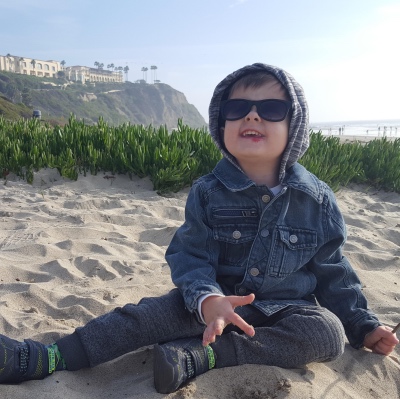 From the time he was born, Elliott had been thriving—a happy, “chill” baby and toddler who had been growing well and meeting all his milestones.

But one morning in the middle of May, the 20-month-old toddler woke up sick. He didn’t want to eat or drink. He was clingy and fussy, and then he threw up. Soon, he was making strange noises while he was breathing.

Worried, Raquel took him to his pediatrician, who sent her to a nearby emergency room. A chest X-ray revealed fluid in Elliott’s lungs, and he was admitted to the hospital. The next morning, the doctor on duty—who had once worked at CHLA—ordered an immediate echocardiogram, an ultrasound of his heart.

The technician hadn’t even finished the test when the doctor summoned Raquel and Travis out into the hallway. She’d just called Children’s Hospital Los Angeles; an ambulance was on the way. Elliott was in heart failure.

Raquel was so stunned, she almost fainted right there in the hallway. Travis, who is 6-foot-8, almost fell on top of her.

“The doctor had to grab me and take me to a chair so I could sit down and catch my breath,” she remembers. “Heart failure? I mean, that had never crossed our minds. He had been thriving. How could this have happened? How? Why? I was just overwhelmed.”

When Elliott arrived at CHLA, he was immediately admitted to the Thomas and Dorothy Leavey Foundation Cardiothoracic Intensive Care Unit (CTICU). A sea of doctors converged on him, inserting a central line so they could administer vital medication for his heart.

“He was in critical condition,” Raquel says. “Extremely critical.” 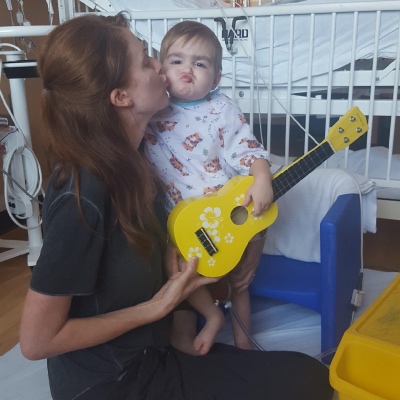 Elliott was diagnosed with dilated cardiomyopathy, a condition where the heart becomes weak and enlarged and is unable to pump blood well. A brain natriuretic peptide (BNP) blood test measuring his heart function came out in the 4000s; a normal result is under 100.

“In about 60 percent of children with dilated cardiomyopathy, the cause is unknown,” says Jennifer Su, MD, one of Elliott’s cardiologists at CHLA. “It’s unclear whether Elliott had an infection that caused this, or whether his heart hadn’t actually been working well for months, but had been compensating, and the acute illness was just a tipping point.”

Regardless of the cause, it quickly became clear that Elliott’s only hope was a heart transplant. But a wait for a heart can take months. Elliott’s heart wasn’t going to last that long.

Enter the Berlin Heart, the only ventricular assist device (VAD) approved for children by the U.S. Food and Drug Administration. The device is essentially a mechanical pump that takes over the work of the left ventricle—pumping blood to the body and vital organs—and serves as a vital “bridge” to transplant.

The pump, though, is not implanted in the body. Instead, surgeons implant flexible tubes in the heart that extend through the skin and connect to the external pump, which is connected to a 200-pound computerized machine that drives it.

That meant Elliott would not be able to leave the hospital. He was literally “leashed” to the machine. But it was his only chance. “Elliott’s heart function was at a level where it could give out at any time,” Dr. Su says. “Without the Berlin Heart, he would not be alive today.”

Living in the moment

By the time Raquel was making that total eclipse wish on Aug. 21, Elliott had been on the Berlin Heart for almost three months. It had been, to say the least, a long, hard summer.

“Our world turned upside down,” Raquel says. “We called our jobs and said, ‘We can’t come in; we don’t know when we can come in.’ Everything stopped for us.”

Elliott spent the first eight weeks in the CTICU, before he was finally strong enough to move to the Cardiovascular Acute unit. His body was weak; he had to learn how to sit up, stand and walk all over again—this time while attached to the Berlin Heart.

The family settled into a routine. CHLA become their home, their second family. Mixed in with the exhaustion were wonderful moments—like Elliott’s music teacher coming to visit him, playing soothing ukulele and guitar and bringing him instruments to help with his occupational therapy. And there was the moment Raquel and Travis were able to hold their son for the first time in six weeks.

“It was like holding him for the first time all over again,” his mom says.

They learned, most of all, not to think ahead. “We just had to live in the moment,” Raquel says. “Otherwise, you get so anxious. Those walls just come closing in on you.”

Around 4 p.m. on the day of the total solar eclipse, Raquel was watching a movie with Elliott in his room when one of the transplant nurses walked in.

“The best part of my job is telling parents we’ve found a donor,” the nurse said. 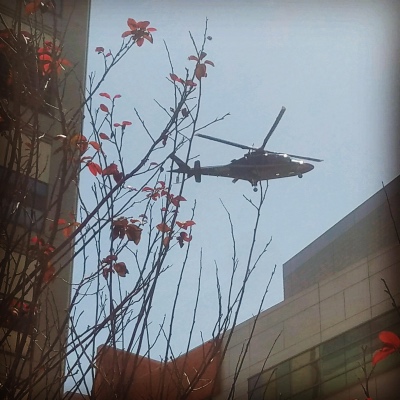 Yes, the nurse said. A donor heart was available for Elliott. Raquel’s total eclipse wish had come true. “I freaked out,” she remembers. “I just knew this day was special, just the energy. I knew it.”

She and Travis started celebrating. She ran to tell the nurses in the CTICU. She was elated—and then, just as suddenly, a wave of sadness came over her.

“It started hitting me that, oh my God, a child died,” she says. “I was mourning for that child and those parents.”

Elliott was wheeled into surgery the next morning. Around noon, Raquel and Travis and a few close family members were outside the hospital’s HBO Café when a helicopter approached CHLA. They ran to get a better view.

“That’s my son’s heart,” Raquel told a group of CHLA employees eating lunch nearby. “My son’s new heart is on that helicopter.”

Dr. Subramanyan and the team took him back into surgery and reopened his chest—an emergency measure that ensured Elliott could be immediately connected to extracorporeal membrane oxygenation (ECMO), a heart-lung bypass support system, if his new heart gave out.

Luckily, that wasn’t needed. After he came out of the operating room, the CHLA team started him on additional medications, including insulin (he had very high glucose levels). His heart function quickly improved. 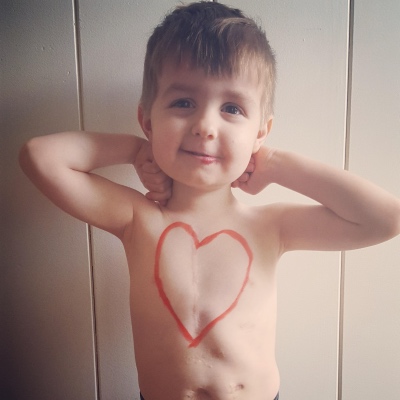 Today, Elliott is 3 ½ and doing great. He’s extremely gregarious, smiles and says hi to everyone, and adores playing outside in the dirt with his toy trucks and beloved toy space shuttle. He has energy to spare.

“He’s a normal, hyper little 3-year-old,” says his mom. “You would never know he had a heart transplant.”

Raquel and Travis want to express their gratitude to CHLA—the nurses, doctors, surgeons, Child Life specialists and the entire Heart Institute team who walked hand-in-hand with them on this most difficult of journeys.

“We’re just very humble and grateful,” Raquel says. “We still live in the moment, but we also look forward to the future.”

She thinks about the donor family every day. She knows it was that family’s courage and generosity—amidst gut-wrenching grief—that gave her son his second chance.

Sometimes, at night, she’ll tiptoe into Elliott’s room and watch him sleep, his chest rising and falling effortlessly with his healthy new heart inside. And she’ll say a little prayer, a little blessing of thanks:

“You’re such a good heart. We’re always going to take care of you,” she whispers. “Thank you, little heart.”