Ask anyone about five-year-old JJ and they can’t help but gush about his sweet smile or his playful, good-natured demeanor. In November 2019, JJ’s smile disappeared. He came down with a cold and understandably didn’t feel like doing much at all. His mom, Tawni, figured that her little boy, then 3, needed some rest to get his energy back. 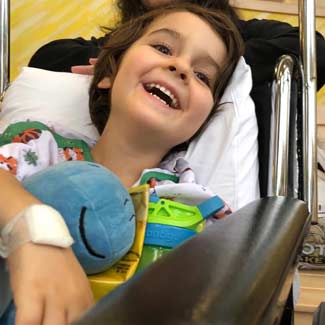 “A week had gone by and he was really fatigued and didn’t have much of an appetite,” Tawni recalls. “He just wasn’t recovering and he wasn’t acting like his normal self, so I took him to our local Urgent Care.”

Once there, doctors examined JJ, performed a routine blood test and concluded that he was still fighting the cold and needed a few more days to recover. The recommendation didn’t sit well with Tawni, who was worried and made an appointment the next day with a pediatrician 45 minutes away.

“He spent the entire day running more tests and doing multiple panels of bloodwork. This was on a Friday and he said he would call us with the test results on Monday,” Tawni says, noting that she knew she couldn’t wait that long. “JJ didn’t want to walk and he was slurring his words. I was trying to get him to eat something and as we sat at the kitchen table, he vomited and then fell out of his chair and couldn’t get back up.”

A heavy snowstorm hit the mountain community where they lived, making driving conditions hazardous. But Tawni knew she could not wait for the storm to clear.

“I immediately scooped JJ up, grabbed my purse and my other two kids and drove to the emergency department in Bakersfield,” Tawni says.

There, the medical team performed a series of tests, X-rays and scans, and tested JJ’s spinal fluid. A hospital specialist speculated that JJ’s symptoms combined with the initial test results and scan, could mean he had acute disseminated encephalomyelitis (ADEM), a rare inflammatory neurological condition that affects the brain and spinal cord and is seen primarily in children. The specialist explained that she was not certain of the diagnosis and that JJ should be transferred immediately to a hospital better suited to treat his condition – Children’s Hospital Los Angeles.

‘I knew we were in good hands’

“The doctor told us Children’s Hospital Los Angeles was the best place for JJ because they have the right equipment and a team of neurological experts. That same day the CHLA Emergency Transport Team loaded us into the helicopter to Los Angeles,” Tawni says.  “Even though I was so worried about JJ and so scared, I knew we were in good hands because the transport team acted so quickly and knew exactly what to do.” 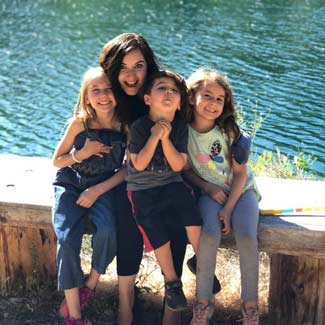 On November 25, 2019, JJ was admitted to CHLA’s Pediatric Intensive Care Unit where he underwent more tests to confirm the ADEM diagnosis and determine if there were additional neurological issues.

“Children with ADEM come in with a variety of symptoms -  weakness, sensory changes, gait disturbance, vision changes, and changes in mentation, also called encephalopathy. We use MRI to see if the clinical picture matches or if what we are seeing is a mimic of something else that wouldn’t respond to the therapies we provide,” explains Jonathan Santoro, MD, Director, Neuroimmunology and Demyelinating Disorders at Children’s Hospital Los Angeles.

“The estimated prevalence of ADEM is 0.5 per 100,000 children and the average age is kids between 3 and 8,” Santoro says. “Children generally get sick – predominantly in the winter and in the spring in California-- with something relatively benign like a mild cold that a parent wouldn’t even take them to a pediatrician for, and then a few weeks after they present with this neurologic phenomenon.”

After two weeks, JJ was transferred to the Margie and Robert E. Petersen Foundation Rehabilitation Center at CHLA to begin intensive physical, occupational and speech therapy.

“When JJ came to the Rehab Center he was medically stabilized and my goal was to get him stronger,” says Lynn Buennagel, PT, DPT, PCS, CBIS.  “JJ’s mom told me how much he likes to go hiking and play with his sisters, so we worked on balance and endurance so that we could get him back to those activities.”

Because JJ was only 3 years old at the time, the team got creative with how to motivate him for the demanding therapy schedule, which was three hours a day, six days a week.

“JJ was here around the holidays, so we would take him down to the Healing Garden and do a little hike around it to look at all of the Christmas decorations. We were able to use that to help motivate him to walk longer distances so he could build his strength and endurance, and all the while making it fun and engaging for him,” Buennagel explains. “We also have lots of toys and games on the unit so we would have him do a puzzle and we would put the pieces on the ground so JJ would have to squat down and pick them up and put them in the puzzle on a table. The squatting helped strengthen his legs.”

Getting his smile back 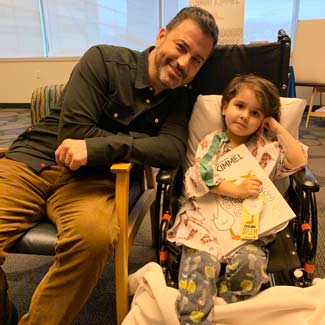 While many kids might be reluctant to participate in a rigorous schedule or nervous about leaving a parent’s side, JJ was all smiles. Tawni says that in between all the therapy sessions, JJ was able to experience some memorable events at CHLA, including meeting Frozen star Kristen Bell, baseball star Justin Turner, and late night talk show host Jimmy Kimmel. Kimmel came to CHLA in December 2019 to read his book, A Serious Goose and, Tawni says, “JJ says Jimmy is his friend and he still loves that book!”

After one week of intensive rehabilitation, JJ was discharged just in time to celebrate the holidays with his family.

“JJ’s prognosis is excellent. The good thing about ADEM is the chance of relapse is generally low,” Santoro says.

That comes as a relief to Tawni, who was concerned that JJ might have some trepidation about returning to CHLA for his follow-up visits and annual MRI scans to ensure his brain is healthy.

“Any time anyone mentions CHLA the first thing he says is ‘I miss the ice cream’ and ‘I miss the pizza!’” Tawni says, laughing. “I’m so grateful to CHLA and all of the incredible people there that helped JJ heal and get his smile back.”

Learn more about the Neurological Instititute.