At 97, Sophia Scano Fitzmaurice has been investing in research into thalassemia, an inherited form of anemia, for 64 years. In that time, she has seen treatment outcomes and life expectancies improve dramatically—in no small part because of investigations she supports at Children's Hospital Los Angeles.

"I lost two beautiful children to a rare blood disorder," says Fitzmaurice of daughter Kristine, born in 1953, and son Gary, born in 1958. "They were among the original research subjects at CHLA in an effort to find a cure. I decided early on to carry on their work."

In patients with thalassemia, the body cannot produce enough hemoglobin, an indispensable molecule in red blood cells that transports oxygen throughout the body. Patients with the disorder try to make lots of red blood cells, but the cells never fully develop and die in the marrow, causing severe anemia.

Fitzmaurice first began supporting CHLA's Carol B. Hyman, MD, a pediatric hematologist, in the 1960s. For the past several decades, she has helped fund the research of Thomas D. Coates, MD, section head of Hematology at the Children's Center for Cancer and Blood Diseases.

"In my experience, Sophia's level of involvement is unique." — Thomas D. Coates, MD, section head of Hematology at the Children's Center for Cancer and Blood Diseases

"She stands alone," says Coates. "In my experience, Sophia's level of involvement is unique. Her enthusiasm and insight are really amazing. I always enjoy talking with her—her positive attitude is infectious."

Fitzmaurice, who also raised two healthy children, Lorraine and Michael, is thrilled at the progress Coates and others are making. Treatment for thalassemia involves multiple blood transfusions, which can cause an overload of iron in vital organs and heart failure. Work spearheaded at CHLA has led to advances in measuring iron overload with cardiac magnetic resonance imaging.

This year, in what Coates calls "a major breakthrough for thalassemia," results from a phase III clinical trial of an experimental drug (luspatercept) showed promise in encouraging late-stage development of red blood cells, allowing the cells to develop completely. CHLA enrolled the highest number of study participants nationwide. One participant told Coates she hadn't felt this well in decades.

"Now these children don't have to die. It's very exciting," says Fitzmaurice.

Starting with one charitable annuity to CHLA, Fitzmaurice has now given 11 annuities to further the hospital's thalassemia research. In addition, she established a bequest to CHLA and funded a patient room in honor of Kristine and Gary in CHLA's Marion and John E. Anderson Pavilion. More recently, she has been supporting Coates by rolling over mandatory distributions from her individual retirement account (IRA) to CHLA.

Kristine, a talented fashion designer, and Gary, a popular floral designer who owned two shops, lived until ages 27 and 26, respectively, longer than most people with thalassemia at the time. Fitzmaurice credits her healthy cooking. Her own longevity may owe itself in part to her ongoing passion for her philanthropy.

Fitzmaurice, who has held leadership positions with the Cooley's Anemia Foundation, feels the presence of Kristine and Gary as she reads up on the latest research. "They are here, on my shoulder," she says. "Even though the answers didn't come in time for them, we are helping children around the world." 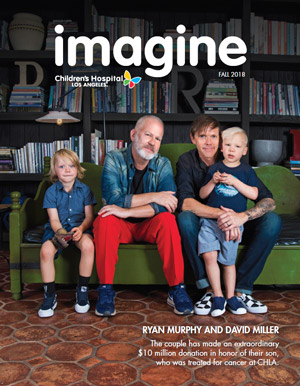