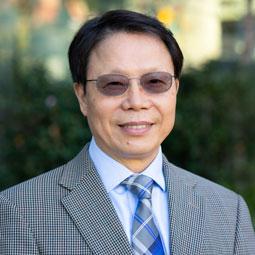 Dr. Rongfu Wang is a Professor of Pediatrics and Medicine for the Cancer and Blood Disease Institute and the Division of Hematology, Oncology and Transplantation & Cellular Therapy at Children’s Hospital Los Angeles (CHLA) and the Keck School of Medicine at the University of Southern California. He is an Endowed Chair and Director of the Cell Therapy Research Program at CHLA. He is also a co-director of Tumor Microenvironment Program at the USC Norris Comprehensive Center.

Dr. Wang received his bachelor’s degree in Biology from Zhejiang University in 1982 and his master’s degree in Biochemistry at the Institute of Genetics and Physiology in 1984. He received his Ph.D degree in Molecular Genetics at the University of Georgia in 1992. Dr. Wang completed postdoctoral training with the Department of Microbiology and Immunology at Stanford University School of Medicine in 1994. He then completed a Cancer Immunotherapy Fellowship at the National Cancer Institute in 1996 and continued as a Senior Investigator until 2000.

In 2000, Dr. Wang was appointed as an Associate Professor in the Department of Immunology at Baylor College of Medicine. At Baylor, he continued his work in identifying new cancer antigens and developing cancer vaccines. In 2004, Dr. Wang was promoted to Professor with tenure. In 2006, he received the Michael DeBakey Excellence in Research Award and in 2007 he was granted the endowed Jack L. Titus Professorship. In 2011, Dr. Wang moved his laboratory to Houston Methodist Research Institute, where he built and became Director of a new Center for Inflammation and Epigenetics with an appointment as Professor in the Department of Microbiology and Immunology at Cornell University.

Dr. Wang’s research interest and expertise are focused in the areas of cancer antigen discovery, cancer immunology, and immunotherapy, innate immune signaling and regulation, and epigenetic regulation of stem cells and cancer. He began work toward understanding the role of the immune system in cancer over 20 years ago. Throughout his career, Dr. Wang has discovered numerous cancer antigens, some (NY-ESO-1) of which have been demonstrated in clinical studies with TCR-T cell immunotherapy. His team has identified antigen-specific regulatory T cells, which can be reversed by Toll-Like Receptor 8 signaling, and discovered critical epigenetic regulators in T-cell differentiation and in induced pluripotent stem cell reprogramming. More recently, his team developed novel self-assembled peptide nanoparticles (SAPNANO) technology, novel CAR-T and neoantigen discovery platform for vaccine and CAR/TCR-T immunotherapy. Further understanding of the mechanisms of epigenetic and metabolic reprogramming of immune cells will lead to the development of novel and robust cancer therapeutics.

Stanford University School of Medicine- Department of Microbiology and Immunology