Any parent will have a pretty good idea about what diaper rash is because it is a very common problem. Up to one third of all diaper wearing babies have a diaper rash at any given time! I found a cutely titled article on diaper rash written by British advanced practice nurses, titled “The Bottom Line on Nappy Rash” and they reported diaper rash statistics from around the world. In the United States, 75 percent of parents reported in a survey that their infant had diaper rash. Diaper rash affects boys, girls and all ethnic groups. Some babies have chronic diaper rash, while some babies have it occasionally. The most common age for diaper rash babies is nine to 12 months of age.

What are the Symptoms of Diaper Rash? (Tweet this) 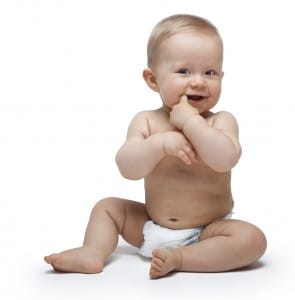 Mild Diaper Rash If your baby has mild diaper rash, you will see small pink or red spots or a rash. Your baby will not show pain or discomfort. Moderate to Severe Diaper Rash Both of  these types of diaper rash can be more painful and your baby may cry and look like they are in distress. The spots will be brighter red or the skin may be cracked and broken or blistered. The rash may spread down to the legs or up the abdomen.

Diaper rash isn’t always caused by unchanged diapers or chafing on your baby’s bottom. Below are some of the most common triggers:

How to Help Your Baby

Regardless of the cause there are some preventive measures and some treatment measures you can take, as early as today!

The bottom line is diaper rash prevention, knowing triggers, being watchful and treating your baby’s diaper rash when it first shows up so that it doesn’t become severe. If any of your friends or family are caring for their baby or expecting a baby, I encourage you to forward this blog post to them to get them off to a great start.