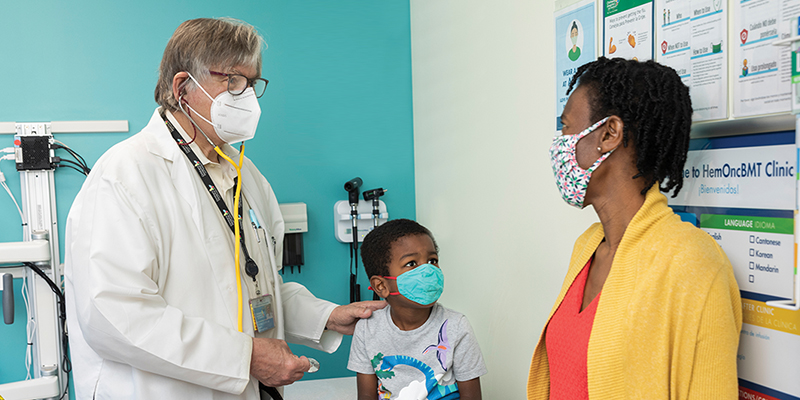 Researchers at Children’s Hospital Los Angeles are unraveling the biological mechanism that triggers pain in people with sickle cell disease—and confirming what mothers have been saying all along.

Over the course of more than three decades studying sickle cell disease and caring for patients, Thomas Coates, MD, has learned an important lesson: listen to the mothers. It is their detailed accounts of their children’s pain that inspired his current research focus. 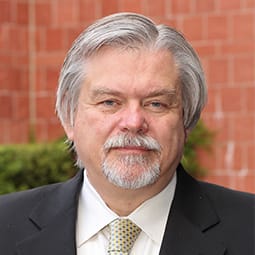 Supported by a five-year National Institutes of Health (NIH) award of $9.5 million, Dr. Coates and colleagues are studying how the autonomic nervous system—a network of cells that regulates processes we don’t consciously think about (like breathing and blood vessel constriction)—plays a role in sickle cell disease.

A life-threatening inherited blood disorder, sickle cell disease is most prevalent in parts of the world where malaria is or was common; the genetic mutation that can lead to the disease is thought to have a protective effect against malaria. In the United States, sickle cell disease is rare and most commonly found in people of African and Hispanic descent.

Normally, red blood cells carry hemoglobin, a protein that transports oxygen throughout the body. But in sickle cell disease, the hemoglobin molecules stick together, causing the red blood cells to become rigid and take on a crescent or sickle shape. These cells get stuck traveling through small blood vessels, preventing a healthy supply of oxygen to the tissues. When muscles and bones are deprived of oxygen, people with sickle cell disease can go through episodes of severe pain—similar to the pain of a bone fracture—that can last many days. The pain can be severe enough to require hospitalization.

The question of what causes the change from steady state to crisis has long stumped researchers and clinicians. The consensus from patients and their families is that pain crises most often occur after experiences involving mental stress, anxiety, exposure to extreme temperatures or pain itself.

“Mothers are always saying to their kids, ‘Dress warmly, wear a hat, because if you get cold you are going to have a crisis,’” says Dr. Coates, Section Head of Hematology within the Cancer and Blood Disease Institute at Children’s Hospital Los Angeles.

Through a series of studies with people who have sickle cell disease, Dr. Coates and his research team have shown that when exposed to cold, heat, a painful stimulus or when asked to do tasks that cause some degree of mental stress, these individuals experience a narrowing of their blood vessels called vasoconstriction. According to Dr. Coates, the reduction in blood flow may be what causes pain.

“In the lab, we showed that mental stress, pain and cold can cause an 80% reduction in blood flow, within seconds,” he says. 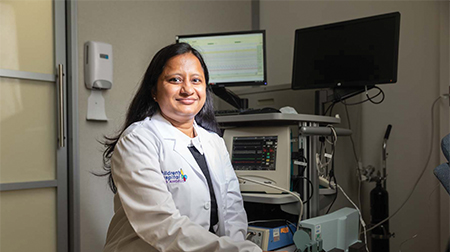 One way that researchers are working to better understand sickle cell disease is by directly measuring blood flow. This information could lead to the creation of a biomarker, an externally measurable substance or process that signals when a biological condition is occurring. For people with sickle cell disease, a biomarker could indicate when a pain crisis will happen.

Dr. Coates and colleagues use available technology—like the red-lighted fingertip oxygen sensor you commonly see in the hospital or the green light in a smart watch that measures heart rate—and mathematical modeling to estimate blood flow.

“We measured and quantified blood flow changes,” Dr. Coates says, “and patients who have more vasoconstriction and low blood flow tend to have more pain crises.”

But there is still a lot to learn about why some people with sickle cell disease feel pain very often and some do not, according to Saranya Veluswamy, MD, an attending physician in the Cancer and Blood Disease Institute and a coinvestigator on several sickle cell studies. “We are looking at whether it’s due to differences in their autonomic nervous systems,” she says. “Are people who have an autonomic nervous system imbalance more prone to pain?”

Understanding why people experience debilitating pain and finding ways to predict when it happens could lead to prevention strategies.

The team is studying whether cognitive-based interventions, which focus on teaching people with sickle cell disease how to calm their mind and body, could help them avoid a pain crisis. 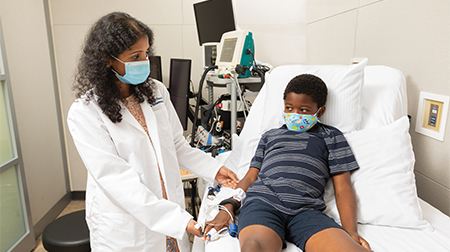 “We definitely won’t replace mainstream therapies, but if these cognitive-based therapies translate into patients having fewer hospitalizations or emergency room visits, and that they can continue with their day-to-day life, that is valuable,” says Shah.

An earlier pilot study led by Dr. Coates and Lonnie Zeltzer, MD, Director of the Pediatric Pain Program at UCLA Mattel Children’s Hospital, showed that a 30-minute hypnosis session increased blood flow in people with sickle cell disease. The team recently completed a larger study, led by Dr. Zeltzer’s postdoctoral fellow, Sarah R. Martin, PhD, a clinical psychologist and now an Assistant Professor in the Department of Anesthesiology and Perioperative Care at the University of California, Irvine, School of Medicine’s Center on Stress and Health.

Dr. Martin guided half of the participants through a hypnosis exercise in which they were asked to imagine creating a comforting medication for their own unique pain. The other half, the controls, listened as Dr. Martin read them stories. Before and after the hypnosis and stories, researchers placed a thermal metal device on participants’ arms meant to cause some slight pain. Those who did the hypnosis exercise reported less pain and less reduction in blood flow compared with the control group that did not do the hypnosis.

“I always like to promote openmindedness in terms of considering these other evidence-based and effective interventions for pain,” Dr. Martin says.

MOVING FROM THE LAB TO HOME

The team is currently proposing a follow-up study that would monitor how hypnosis affects blood flow over time in teenagers with sickle cell disease. In addition to practicing self-hypnosis at home and using a cognitive-based therapy app, study participants would wear a device on their wrist, similar to a fitness tracker, that would optically measure vasoconstriction—allowing investigators to track and remotely measure the impact of hypnosis on blood flow.

According to Dr. Coates, the findings could have long-term effects on how sickle cell disease is managed. “It could be possible that by wearing a device on their wrist, a patient could monitor their blood flow, and if it is decreasing, they could take a medication that would reverse the process and, hopefully, prevent a crisis,” he says.

Also, they can take steps to prevent vasoconstriction—such as practicing self-hypnosis and wearing warm clothing when it’s cold.

“When people ask me, ‘What is the conclusion of your $9.5 million research grant,’” says Dr. Coates, “I say, ‘Well, you should listen to mothers.’” 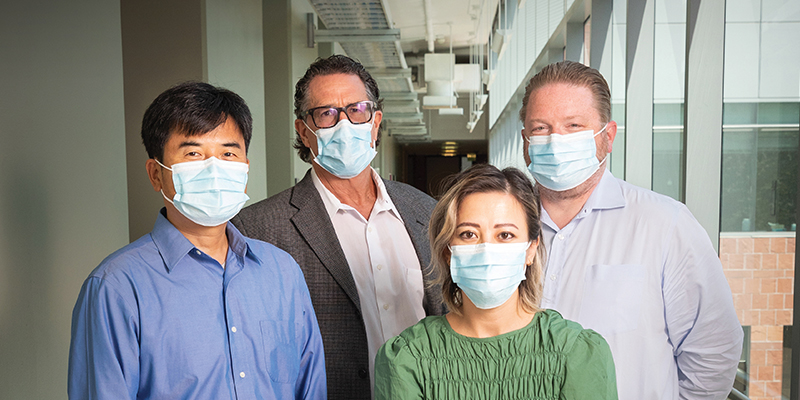 Read about the scientists with vision and drive who helped keep CHLA ahead of the COVID-19 curve. 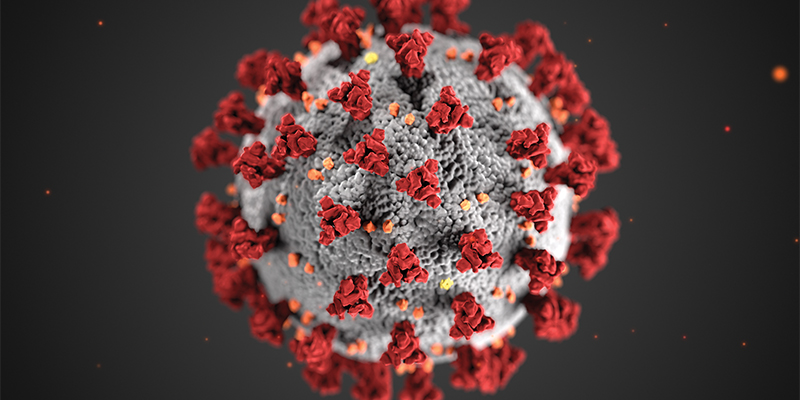 5 Things to Know about COVID-19 Research

From new mothers to a possible diabetes link, COVID-19 research isn’t always just about the virus. 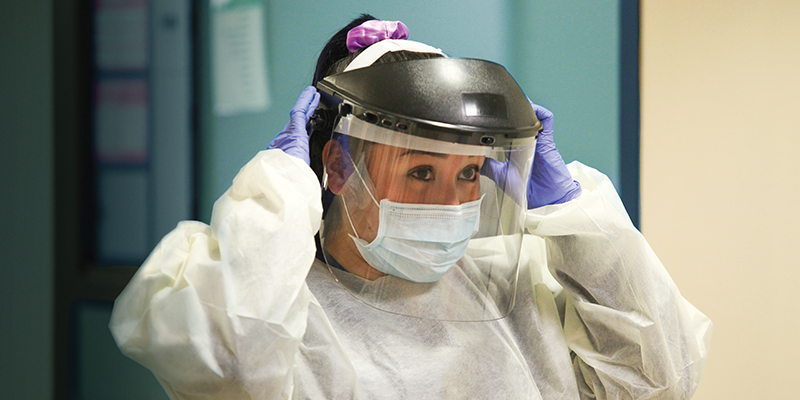 A visual timeline of the year that changed everything

Sometimes, treating patients effectively means listening to one of the best resources: the parents. 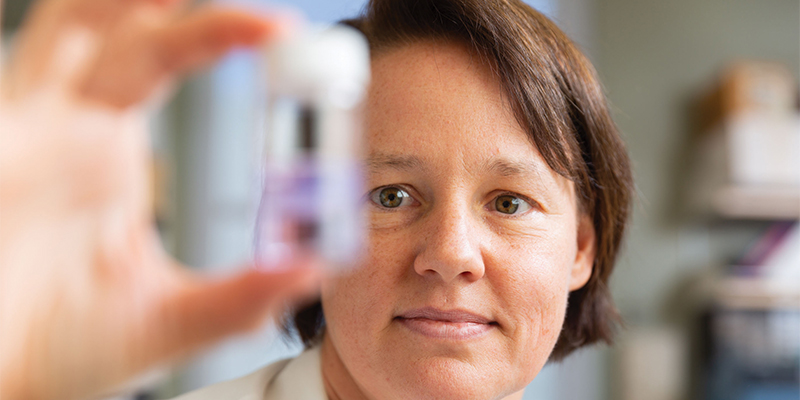 This surgeon’s clinical trial could lead to the first-ever treatment for a rare intestinal disorder. 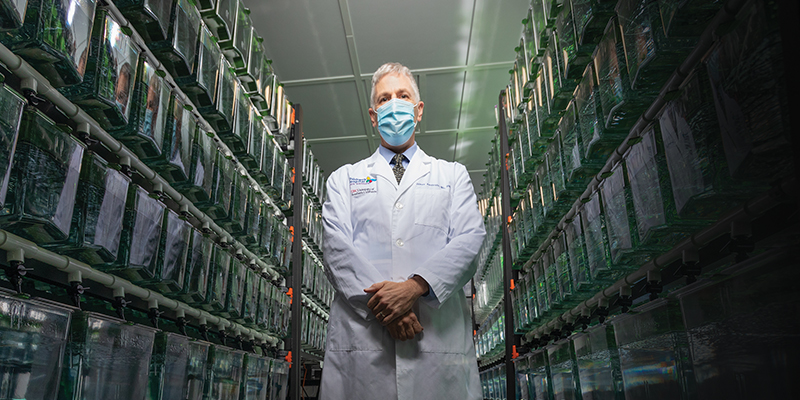 How a tiny fish could transform treatments for childhood cancers. 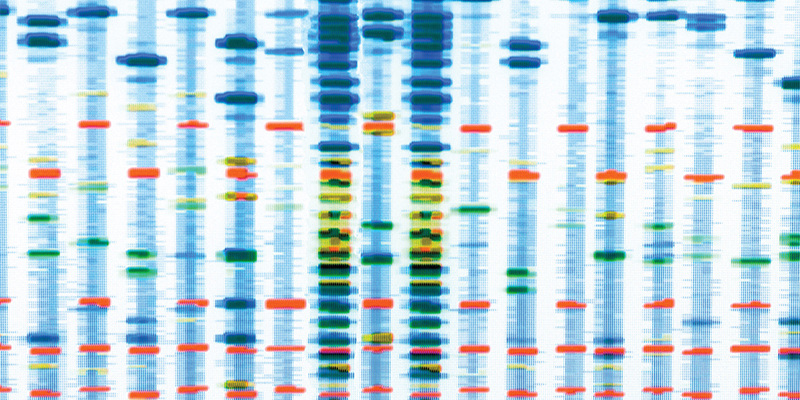 What is Genetic Sequencing?

Take a peek inside the technology behind tracking the virus. 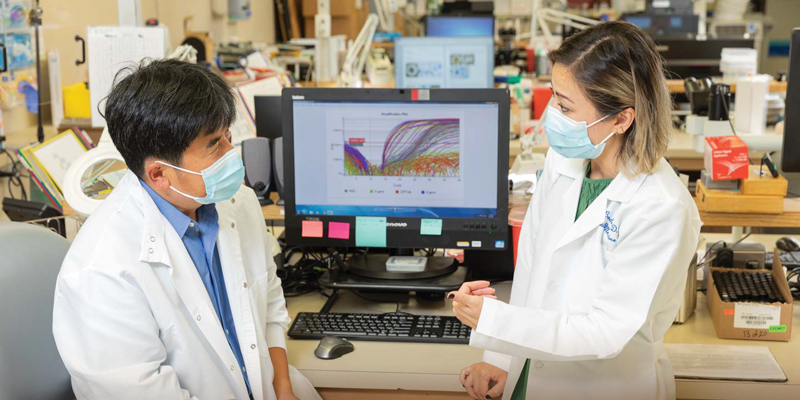 The amazing people behind the science. 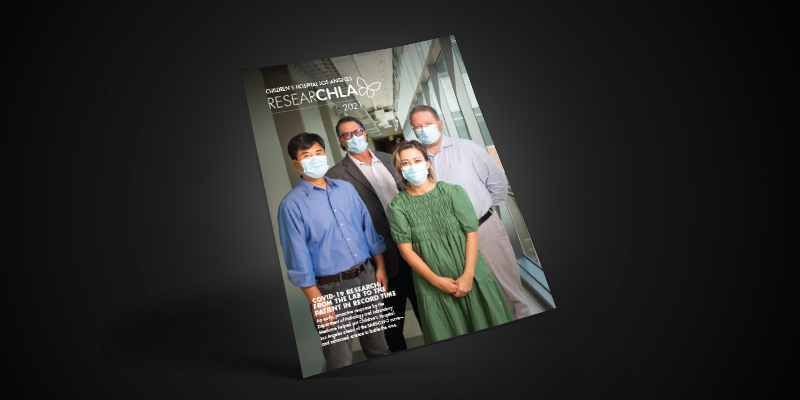 Download a PDF of ResearCHLA 2021 in the original magazine format