Is there an alternative to disposable diapers? 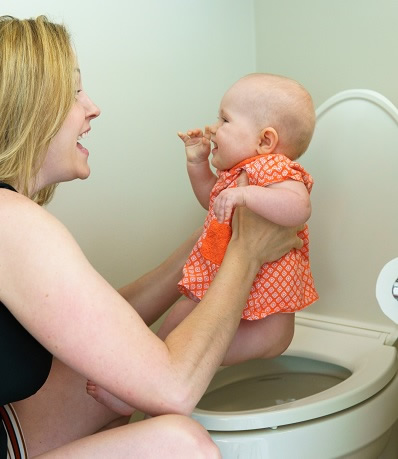 You know that disposable diapers are ecologically questionable, but cloth diapers seem too messy for you and your child – is there an alternative?

The answer is ‘yes’ according to Jeffrey M. Bender, MD, a pediatric infectious disease specialist at Children’s Hospital Los Angeles and Rosemary C. She, MD, a pathologist and medical microbiologist at the Keck School of Medicine of the University of Southern California. On June 21, they published a perspective paper in Pediatrics, about an age-old practice now known as elimination communication (EC). Bender and She, who are married, share their personal experience practicing EC, having made a conscious decision to not use disposable diapers when planning for the birth of their third child.

EC is not a new concept. In fact, humans have been using it for millennia and still do in resource-limited regions.  Many will be surprised to learn that as little as three to four generations ago, most Americans did so as well.

Also known as natural infant hygiene, EC uses an infant’s own timing and cues to recognize when they need to pee or poop. This practice promotes early toilet training and protects child health in addition to saving money and the environment.

“Contrary to the notion that infants relieve themselves randomly and constantly throughout the day, babies naturally eliminate at predictable times such as upon waking or after feeding,” explained Bender.

“We began using EC when we first brought our daughter home from the hospital,” said She. “I went to change her cloth diaper and I noticed it was dry, so I took her over a potty as we’d read about in the books, and she urinated into the receptacle.” During the first few weeks, they regularly attempted toilet time at awakening and after each feeding accompanied by a short whistle. “We happily discovered that our daughter naturally responded by relieving herself.” By the end of one month, they were having only 1-2 “misses” per day and by 6 months of age she no longer required any cloth diapers as back-ups and they carried very little with them when going out. “By the time she was 18 months old and developmentally ready, she transitioned seamlessly into using the toilet independently,” added She.

When children typically begin toilet training, they face a daunting challenge because they have been trained to eliminate into diapers since birth. Caregivers then spend the next 1-2 years teaching them to unlearn this behavior. Bender and She found that putting the extra work in up front during the first 6 months was actually easier for caregivers and far less frustrating for the child.

The authors look at the introduction of disposable diapers in the late 1950s and consider the influence of the popular pediatric developmental specialist, T. Berry Brazelton, MD, who in the 1960s discouraged parents from pushing their child prematurely to toilet train, suggesting that most children are ready at the age of 2-3 years. While Brazelton recognized the benefits of EC techniques, he cautioned that it would be very difficult to do in American society where we don’t have 6 months of parental leave to bond and learn those communications skills.

“When we talk about EC with others, many are shocked that that early toilet training is even possible,” said She. “Interestingly, it is the grandparents and great-grandparents that are most familiar with EC and are the biggest supporters of using it.”

According to Bender, children will often stay in soiled diapers for hours, irritating the skin which can cause urinary tract infections or lead to skin breakdown allowing for methicillin-resistant Staphylococcus aureus (MSRA) skin infections to occur and cause abscesses. MSRAs are contagious and are very resistant to most types of antibiotics.

As a pediatric infectious diseases specialist, Bender sees many children in the clinic who are suffering from these recurrent skin and soft tissue infections. “While there are medical guidelines for how to treat MSRA infections, the best way to prevent these abscesses is to get children out of diapers,” said Bender.

According to Bender and She, the U.S. creates more than 3.4 million tons of used diaper waste each year and disposable diapers may take more than 500 years to degrade.  Disposable diapers are also expensive, costing families nearly $1,000 per year of use.

Although cloth diapers generate less environmental waste than disposable diapers, and allow toddlers to be more aware when they have soiled themselves, they are potentially more work and do not address the health concerns of diaper use.  Bender and She wished they had been familiar with EC when their first two children were born and believe that this under recognized approach to toilet training could be beneficial to U.S. families in terms of child health, convenience and expense.  “While it requires some hard work and dedication at the outset, EC is natural, generates no landfill or ocean waste, and it’s free,” they explained.  “As working parents and physicians, we believe it is important that providers who care for children learn more about EC and incorporate this alternative into their discussions with young and growing families.”