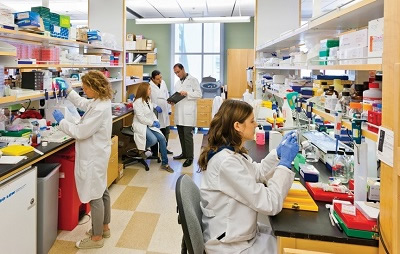 A key unit of the kidney, the nephron is a tiny structure that filters waste. In humans, about 500,000 to 1,000,000 nephrons are generated before week 34 to 36 of fetal gestation, a point at which NP cells are fully depleted and nephrogenesis ceases. The loss of a sufficient number of nephrons at any time after this period, leads to irreversible kidney failure, as no further cell repair or regeneration can occur.

Previously, nephron progenitors have primarily been studied in animal models or through the use of induced pluripotent stem cells (iPCs). The CHLA scientists utilized an efficient protocol for direct isolation of human NP using RNA-labeling probes to obtain NP-expressing SIX2 and CITED1 – the master genes regulating renal development.

“In addition to defining the genetic profile of human NP, this system will facilitate studies of human kidney development, providing a novel tool for renal regeneration and bioengineering purposes,” says principal investigator Laura Perin, PhD.  She and contributor Roger De Filippo, MD, chief of the CHLA Division of Urology – are co-directors of CHLA’s GOFARR Laboratory for Organ Regenerative Research and Cell Therapeutics in Urology.

Perin notes that this proof of concept opens up a lot of applications to researchers, who can employ the technique with other organs, such as the pancreas or lung. “This technique provides a ‘how to’ of human tissue during development,” Perin says.

“It is an important tool that will allow scientists to study cell renewal and differentiation in human cells, perhaps offering clues to how to regulate such development,” added first author Stefano Da Sacco, PhD.