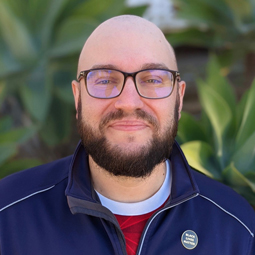 Division of Research on Children, Youth and Families

As a kid, Dr. Marshall often wondered what that “unleaded” sign at the gas station really meant. He had no idea that his career would one day revolve around lead—and its toxic impacts on children.

“I’m interested in examining how lead exposure and the risk of lead exposure can alter brain development in children and adolescents,” he explains. “My goal is to do research that will help minimize these environmental exposures and inform early interventions and policies that can address these inequities.”

Dr. Marshall, who joined the CHLA faculty in July, began his lead-related studies in 2018 while working as a postdoctoral fellow under Elizabeth Sowell, PhD—whose lab is part of the national Adolescent Brain Cognitive Development (ABCD) study.

In early 2020, Dr. Marshall was first author on a Nature Medicine paper with Dr. Sowell that found that an increased risk of lead exposure was associated with lower cognitive scores and smaller brains—but only for children from lower-income families.

Today, he continues to collaborate with Dr. Sowell and recently applied for his first independent NIH grant, which would allow him to study current lead exposure levels in adolescents.

“I love that I’ve been able to integrate so many of my passions into my research—from helping kids to studying brain development to working with maps, which I’ve loved since the fourth grade,” Dr. Marshall says. “It’s such a neat combination, to analyze this geographically specific data and link it contextually with brain development and structure.”

Originally from Rhode Island, his passions outside of work include baseball (he loves the Seattle Mariners) and horror movies. (For those so inclined, he recommends “Let the Right One In” and a Zoom-themed film called “Host.”) He and his wife live in Irvine with their “COVID dog”—a stubborn, set-in-her-ways senior miniature poodle named Dottie that they adopted during the pandemic.