The Curious Case of Kairi 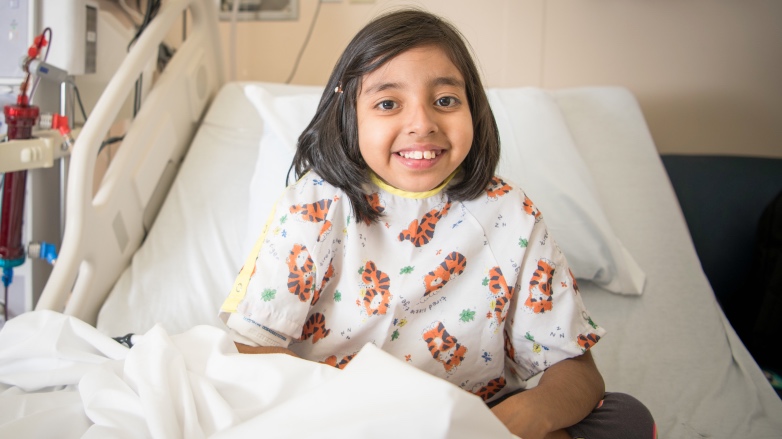 What caused a young girl’s liver and kidney disease? The mystery continues as her doctors plan for a transplant of both organs.

Rachel Lestz, MD, not one to mince words or to conserve them, is abruptly stuck in a pause, halfway between a plausible hypothetical and an oncoming dilemma.

“Am I that curious a person?” she asks herself aloud. 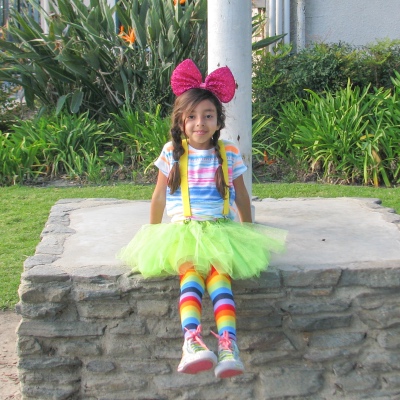 She is considering this: If she goes forward with her half of a liver-kidney transplant on Kairi, her 11-year-old nephrology patient whose liver and kidney failure doctors have been unable to diagnose, would she continue to pursue the source of Kairi’s disease even after the transplant is completed? Would there be some therapeutic benefit to knowing—or if not, would trying to satisfy the family’s need for an answer be worth the strain that more testing would cause them?

Meditating on the maybes, if-thens and could-bes has become a vexing part of Kairi’s case, since she presented in September 2016 in the Emergency Department at Children’s Hospital Los Angeles after her pediatrician found her spleen enlarged at an annual exam, and a subsequent blood draw showed low blood cell and platelet counts, a condition called pancytopenia.

At CHLA, the initial suspicion of cancer was dismissed by a clean bone marrow biopsy. But an ultrasound showed abnormalities in the liver and kidney, and biopsies showed the two organs to be engulfed by scar tissue, indicating some prior disorder that left both unable to function adequately.

It all bewildered her parents, as Kairi had exhibited no symptoms. “I was always asking her, ‘Do you feel pain’? Do you feel this? Do you feel that?’” her mother, Roxana, says. “She always said no.”

“It must have happened so slowly that she didn’t feel anything,” says CHLA nephrologist Nadine Khouzam, MD.

“That’s not uncommon with kidney disease. You don’t know you have it because it happens so slowly, until it’s end stage and things don’t work anymore. I can see all that damage, but I don’t know what caused it.” Kairi’s biopsy showed scarring and atrophy that consumed more than 60 percent of her kidneys. “That’s the end.”

‘There’s nothing good about the spleen’

If the end wasn’t in dispute, the beginning would stay muddled. After searching online for information on the drive to CHLA, Kairi’s father, Oscar, knew that an inflamed spleen was serious. “I whispered to my older daughter, ‘There’s nothing good about the spleen,’” he says. “She nodded at me. She understood too.”

One of the not-good things about the spleen is that it sits downstream from the liver, so swelling is a sign that blood is backing up into it, the result of a deteriorated liver disrupting blood flow. With blood cells and platelets caught in the spleen, the available number in the regular blood count is lowered—thus the finding of pancytopenia. In addition, Kairi’s level of creatinine, a waste product that gets cleared out by healthy kidneys, was five times the norm.

“They take you into a little room, you know?” Oscar says. “I don’t like that room anymore.”

They were at first heartened to learn it wasn’t cancer—“a brief moment of whew,” Roxana says. The exhalation was cut short when the doctors explained the extent of the liver and kidney decay couldn’t be undone and would require transplanting of both organs.

“Your world at that moment goes upside down,” Roxana says. “You can’t even think about anything else but what they’re going to tell you. I was like, ‘How can that be? She doesn’t look sick!’”

Her disbelief, though, never crossed over to denial. “One doctor can be wrong, but a team of the best doctors can’t be wrong.”

Within a few months Kairi’s kidney function sank as her creatinine jumped to 10 times the norm. She “tipped over,” Dr. Lestz says, passing the threshold that forced her to refer Kairi for dialysis, where she would be treated by Dr. Khouzam. At the same time she was placed on the waiting list for a liver-kidney transplant. 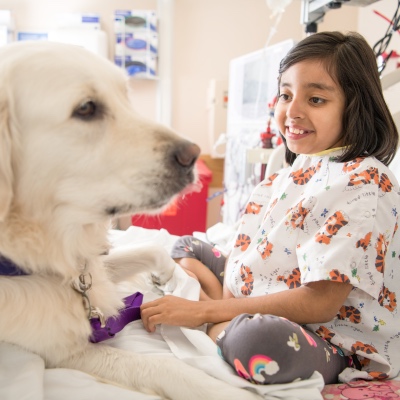 Dialysis can do the work of the kidneys virtually indefinitely and allow for a manageable, if obstructed, life. The liver is a worse matter. There are life-extending medications for the liver, but none that are life sustaining.

Adding to the urgency of finding Kairi a donor is the presence of abnormal veins, called varices, in her esophagus. With scar tissue jamming up blood flow around the liver, the blood tries to wind back to the heart by going through the esophagus, triggering the growth of these enlarged varices. As happened in one frightful episode with Kairi, the veins can burst and bleed out from the large amount of blood they’re ill equipped to be carrying. Dr. Yanni performs regular endoscopies on Kairi to go into the esophagus and band the veins together to keep them from bleeding.

He can’t specify how long Kairi can go without a transplant, but he says, “For any child with liver disease and complications with variceal bleeding, it is a ticking timeclock.”

Throughout the case, Dr. Lestz and Dr. Yanni tried to root out the source of Kairi’s extensive disease. Multiple tests scratched off one credible culprit after another: malignancy, infection, metabolic disorders, structural abnormalities. She was negative for Caroli disease, a disorder of the bile ducts that affects both the liver and kidney.

Genetic testing provided no help. It found Kairi had the gene for bare lymphocyte syndrome, wherein a patient is missing or has malfunctioning lymphocytes, a specialized white blood cell that fights infection. Yet outside of the occasional headache and stomachache, Kairi has never been sick.

“She has so few available white blood cells and her genetic testing tells us those blood cells shouldn’t even work. Well, obviously her white blood cells do work, even though she has less of them. That’s why when we got that result, we were like, OK, that means nothing to us. That does not explain anything.”

Importantly, though, they tested for and ruled out any condition that could resurface in transplanted organs, such as an autoimmune condition or a storage disease, a type of metabolic disorder. That and the DNA panel greenlit Dr. Lestz and Dr. Yanni to press ahead.

“Originally, Dr. Yanni and I thought we can’t have her undergo transplantation unless we figure out what caused her disease. Once we realized it wasn’t something that would alter her treatment or transplant care, and what we had found wasn’t anything relevant, both Dr. Yanni and I felt comfortable going forward.”

Dr. Yanni notes that up to 30 percent of patients with failing livers enter transplantation without a diagnosis, and ultimately the justification is elementary: “Because we have to save the child.”

“I have my own theory,” Kairi says in her chirpy little voice that sounds like sugar and spice but is made of poise and grit.

She’s an advanced fifth-grader, with what seems to be paranormal maturity and intelligence. She’s 4 feet tall and gives her weight in kilos (24) because that’s how the scale outputs it in the dialysis unit. She graciously offers to convert it for the metrically flummoxed: 53 pounds.

“Back when I was in first grade maybe,” she goes on, “I got really sick and I couldn’t even move out of bed. My ear hurt. My throat hurt. I couldn’t taste things the same way. No one could figure out what was wrong with me. So I think that could have been the start. That could have been an infection that caused everything. The year after, that’s when I got sick.” 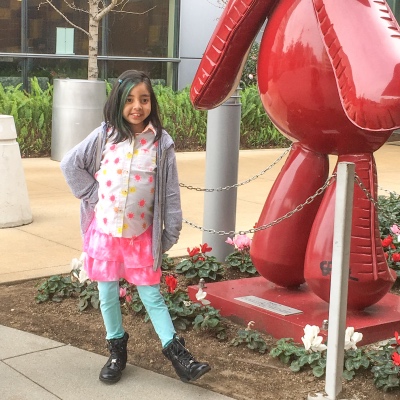 She doesn’t spend much time thinking about it any further. However, if her doctors do eventually determine a cause, she wants dibs on it. “I don’t really care as long as I get the transplant, although if it’s a new disease, I want to name it. I’ve been thinking about the L-K disease, like liver-kidney disease, or the Kairi disease. My mom says they will probably name it after the doctor who finds it, but I’m still hoping I can name it.”

For Dr. Lestz, the priority now is assuring the family that diagnosing Kairi’s disease would not have cut off its progression. “I don’t know that we’ll really ever get to the bottom of it,” she says, breaking her pause. “The most important message for Kairi and her parents is that we don’t believe her disease could have been prevented. Early knowledge would not have changed her underlying disease. We don’t have some magical medicine that would have cured her.”

Meanwhile the wait for a donor lengthens. The family has three times received calls with news of a donor offer, but as happens often, after review by the transplant team one of the organs proved faulty and there was no match. The team has prepped the family to understand that accepting an offer is several steps off from going forward with the procedure. Upon examination an organ can be deficient in any number of ways.

Roxana tries to see the light in the process. “When they called us the first time, I was so happy,” she says. “I couldn’t stop smiling. Then when they told us no, I was like, OK, next time it will be for something that is going to last. That gives me more hope for Kairi because I know they are looking through everything to make sure it’s going to be good for her.

“Every time my phone rings and it says CHLA or the area code is 323, my heart starts pounding because I feel like, oh my god, what if they’re calling us for the transplant? Sooner or later they’re going to call and this is going to be it.”