Striving for a Chance 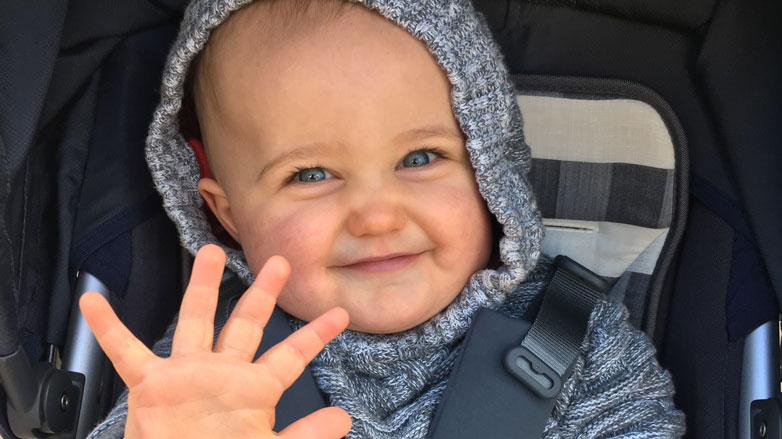 Baby Striver was born with three heart chambers instead of four. He’s been a fighter ever since.

The early stages of Megan’s pregnancy began the way these things often do.

There was the nervous anticipation of that positive pregnancy test; the joy expectant parents Megan and her husband John experienced telling their families; and the giddiness of finding out the gender, after which they came up with the name Striver for their son.

But about halfway through Megan’s pregnancy, unbridled excitement turned to shock and despair. Their baby was diagnosed with double-inlet left ventricle (DILV), a rare single-ventricle heart condition. What followed after his birth is a journey that has included two open-heart surgeries at Children’s Hospital Los Angeles so far, months of quarantine at home, and night after night of mom and dad wondering what the future might bring. Now they marvel at his resilience.

“He’s a strong little son of a gun,” says Megan. “Unless you take his shirt off and see the scar on his chest, you’d have no idea what this little fighter has been through in his young life.”

Striver was diagnosed in utero during his 20-week ultrasound in September 2017. Up until that point, Megan had experienced a “normal” pregnancy and had no reason to suspect anything was awry. John, as he often does, had the camera rolling in the room, trained on Megan’s face as the ultrasound images appeared on the screen. The footage is emotional to watch. 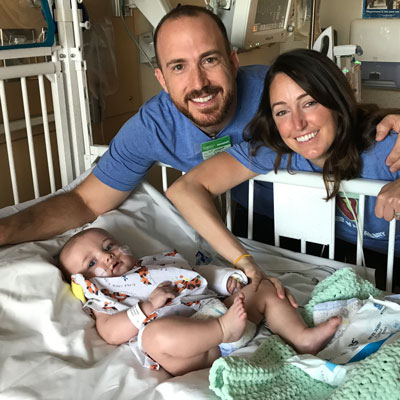 He took time to explain the condition, noting that it occurs in roughly five out of every 100,000 newborns worldwide.

Then he laid out the biology of it. In a healthy human heart, the right ventricle pumps oxygen-poor blood from the heart to the lungs, while the left side receives oxygenated blood from the lungs and sends it out to the entire body. With DILV patients, the right ventricle doesn’t grow fully, and the left and right atria are connected to the left ventricle only, such that oxygen-rich blood and oxygen-poor blood combine, resulting in lower oxygen levels going to the body of 75-85%.

In Striver’s case, there were other abnormalities: His aorta and pulmonary artery were switched in position (transposed), and his pulmonary valve was very small.

“This case was very rare, but nothing we hadn’t seen before,” says Dr. Pruetz. “If you had to rely on one ventricle for the rest of your life, you’d want to choose the left ventricle. It’s programmed and designed to be a systemic pumping chamber. It’s stronger than the right ventricle. And over time patients with single left ventricles have fewer complications and morbidities as they grow.”

Dr. Pruetz detailed for John and Megan a course of treatment. While there is no cure, there is a series of palliative surgeries to help single-ventricle babies live longer, fuller lives. Striver would need three open-heart surgeries over the first three years of life to re-route his heart’s venous blood return directly to the lungs while the single left ventricle pumps arterial blood flow to the body.

John and Megan, dumbfounded, simply tried to make sense of it all.

“What started out as a happy day turned into the worst day of our lives,” Megan says. “From that moment everything was separated into before and after diagnosis.”

Megan and John found comfort in doctors telling them Striver could live a happy life. Once they had time to process their initial feelings, they adapted to their reality with renewed vigor. 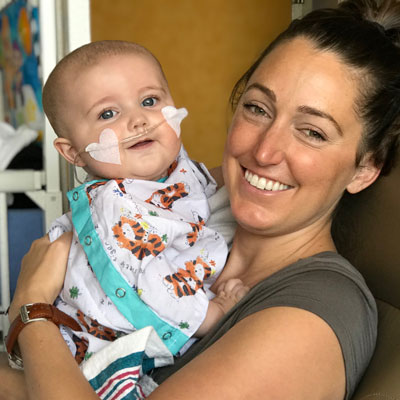 Megan initially researched the condition as best as she could, preparing herself for what was to come, but then retreated to focus on staying calm for the remainder of the pregnancy. John stepped into student mode, peppering Dr. Pruetz with questions and prompting the doctor to joke about how he would earn a degree of his own once Striver was born. During this time John put together the first of two videos—a five-minute clip that explained and diagramed precisely what was going on in Striver’s heart and how the doctors would address it.

“Researching the video helped me get through those early days,” he says. “It also gave us something to share with friends and family who asked about Striver; fielding the same questions over and over again was emotionally draining, and this was a good way to answer without feeling stressed.”

Striver was born in January 2018 and transferred almost immediately by ambulance to CHLA, where Vaughn Starnes, MD, Co-Director of the Heart Institute and Head of the Division of Cardiothoracic Surgery at CHLA, operated on him three days later.

Striver’s first surgery was a Damus-Kaye Stansel procedure, during which Dr. Starnes attached his pulmonary artery to his aorta. Then he inserted a Blalock-Taussig shunt, which is a tube that carries blood from the aorta to the lungs.

The surgery took three hours, and Striver spent most of the time hooked up to a bypass machine that was essentially acting as his heart and lungs. When he came out of surgery, he had a big translucent band-aid covering his open chest cavity.

“Other than the videos, I don’t have memories of that,” John says. “My brain blocked out a lot of it.”

Striver, John, and Megan stayed at CHLA for about a month before they were cleared to go home. Back in their little downtown L.A. apartment, the transition was rough. Because Striver was in what’s known as the “interstage” between the first two heart surgeries, John and Megan had to check his blood-oxygen levels three times a day, weigh him daily with a hospital scale, and track all his feedings. They also had to keep him under quarantine—limited visitors, controlled outings, and minimal exposure to germs.

Colic further complicated those first months at home; though he was putting on weight and growing well, Striver was obviously uncomfortable after every meal and spent hours of every day crying inconsolably.

“Those were dark times,” John says. “We felt so helpless. We just wanted him to feel better.”

Relief came sooner than anticipated. Over an early July weekend, Megan noticed Striver’s blood-oxygen levels were dropping lower than they should. They had a regularly scheduled appointment that Monday, and Dr. Pruetz decided to admit him. Dr. Starnes reviewed the charts and said Striver was ready for his second heart operation, known as the Glenn procedure.

During the procedure, Dr. Starnes essentially rerouted blood returning from Striver’s upper body to his lungs, an important step in establishing a new circulation loop.

Megan cried and hugged their interstage nurse when Striver was admitted, but they were tears of relief.  “As crazy as it might sound, it was a huge weight off our shoulders to get him admitted and into the Glenn,” says John. “Every day and week before this surgery, we were saturated like sponges with anxiety.”

The completion of the second surgery also ushered in a new era of parenthood for John and Megan. Dr. Pruetz “prescribed” that Megan stop recording the baby’s blood-oxygen levels. He encouraged them to start taking Striver out and about. Megan remembers the first time she went to the grocery store with her son and describes the experience as “liberating.” John jokes that the day they stopped recording every meal on the refrigerator, he “felt like we might live through this.”

Striver’s colic went away, and he started sleeping better. Megan was able to take him on regular trips around town, establishing newer, lighter routines.

“He is such a butterball of joy,” Megan says.

Since that day, laughter and levity have been more the norm than the exception. Striver is growing, and his personality continues to reveal itself; so far, he’s proven to be silly, curious, sassy and strong. John and Megan have established a rhythm, living in what John calls a “sweet spot” between the second and third surgery. 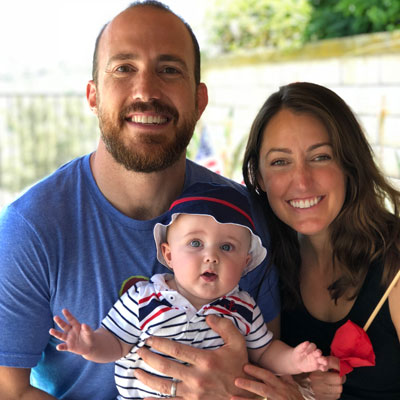 Striver will have a third surgery, known as the Fontan. During this operation, Dr. Starnes will reroute blood returning from the lower body to the lungs, thus completing the circulation loop and bringing Striver’s oxygen saturation up to normal levels, over 95%. He’ll likely have that surgery right around his third birthday.

In the meantime, John and Megan have learned to celebrate the little things—from Striver’s vocalizations to his obsession with pulling things out of kitchen cabinets. John, of course, tries to capture as much as he possibly can on video.

The duo carries keychains that say “Choose hope, not fear,” a slogan that has become more of a life motto. Megan says the phrase is a daily reminder to practice thinking optimistically about Striver’s future, including innovations in congenital heart disease research and treatment for single-ventricle patients.

“We all have such a limited time here, who knows what will happen to any of us.” she asks. “Striver chose us for a reason, to bring us the lessons we were meant to learn in our life. He helps us put things into perspective. He helps us focus on hope.”

John agrees, adding that, in many ways, the baby’s very name embodies this spirit perfectly.

“We named him Striver before any of this, before we even got the diagnosis,” John says. “In many cultures you name a child something that reveals a wish you have for their lives, and we wanted him to strive for goodness and love for himself and others during his life. He certainly has done all of that already. He teaches us every day. And he’ll continue to do so for the rest of his life.”

Teens With Heavy Menstruation Don’t Need to Suffer in Silence — Period.
2019 Novel Coronavirus: What You Should Know
Creating Hope for Kids Like Kaira
The Healing Power of Music: Diobeth’s Story