Shira Josephson Will Be Your Designated Reader 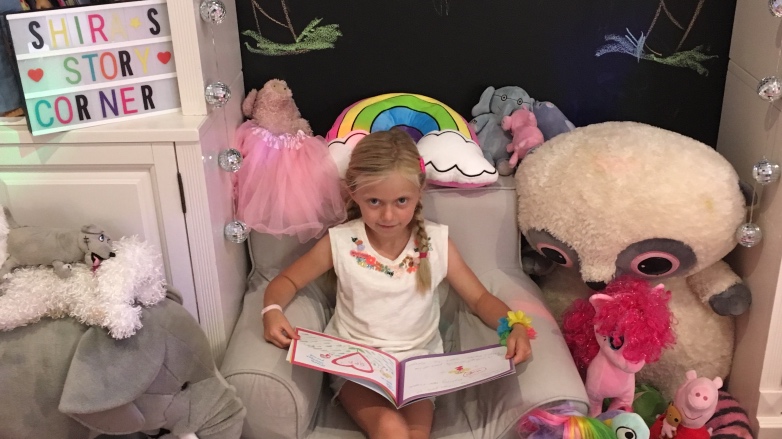 Shira Josephson wrote a book this summer and says it took her “five, four or seven days.” So likewise let it be said that Shira Josephson has the greatest girl’s bedroom ever, in a long time, or since bedrooms were invented.

Descending from the ceiling is a blinking disco ball, dispensing lavender and emerald slivers of light around the room. And there’s a mesh zip-up tent for those times when a 7-year-old needs to withdraw for a spell to reboot. In the opposite corner, across from her bed, is a bounty of stuffed animals, an arrangement of pinks and grays and whites.

The only thing preventing one from calling the entire effect Willy Wonkian is that the attractions aren’t edible.

The fairest hued of all the room’s occupants is the towheaded girl seated among them, in a gray reading chair, joined by a piglet, a raccoon, an elephant and a unicorn. That’s Shira. And all this doubles as the backdrop for Shira’s Story Corner, a book-of-the-week web series created by its namesake to reach out to patients at Children’s Hospital Los Angeles whose illnesses require them to be isolated.

Shira hatched the idea during a visit to CHLA in March after joining Junior Ambassadors, the hospital’s youth fundraising group. As part of her training, she was led on a tour of the hospital, which came to an end sooner than she had anticipated.

“They got to the end of a hall,” her mother, Brooke Josephson, says, “and she knew there were more floors. She asked, ‘Why do we have to stop here?’ They said, ‘The children on the other floors are too sick to have visitors.’”

She rolled that over in her head through the rest of the training. “She had this frown when I took her out to the car, and I didn’t understand why,” Brooke says. “So on the drive home, I said, ‘Hey, what’s going on? What are you thinking about?’ That’s when she just unloaded all these ideas.’”

Shira had thought of a way to provide a kind of virtual companionship to the patients in isolation—by reading to them, as her mother had done for her since she was an infant. “I didn’t realize the power of that,” Brooke says, “the impression that had upon her—that she thought of it on her tour of the hospital.”

Her plan was to make videos of herself reading books aloud, and then store the videos online so that CHLA patients could view them on a mobile device from their rooms. Thus was the genesis of Shira’s Story Corner, spun off of CHLA’s Saban Story Corner, a reading nook on the hospital’s ground-floor lobby. 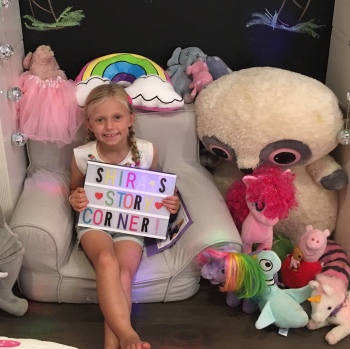 Shira began making weekly videos in May, drawing on books from her own bookshelf. It’s a bare-bones production. Brooke shoots the videos on her iPhone, once facing Shira as she reads and then a second time from over her shoulder so viewers can see the text and illustrations. She edits the two takes together and places the finished piece on YouTube and on ShirasStoryCorner.com, where the menu also includes links to a CHLA donation page and all the previously featured books along with a pathway to buy them on Amazon.

What enhancements there are were all Shira’s inspiration, from the theme song that greets visitors to the site to the “new word” segment, where she stops to sound out a word on her chalkboard that tripped her up as she read. Each video ends with her reading a joke. Here’s one: Why are frogs so happy? Because they eat whatever bugs them. (O, that we could all be frogs.)

The end result has enough genuine brightness and adorability to feel like something you might see on Nickelodeon weekday mornings.

In time, Shira hopes CHLA patients will write to her through the site to request book titles for her to read. As is, she has plenty to take from her own library. One of her newest additions is a book she authored herself this summer, “The Girl on the Subway,” sparked by a chance meeting she had with a young girl in New York City.

Brooke used an online publishing tool to print the 22-page book, and Shira just released it on Shira’s Story Corner. She plans to sell copies of the book at CHLA’s upcoming Action Day in October, alongside the fundraising projects of her fellow Junior Ambassadors.

Shira aced her first event as a Junior Ambassador, Walk L.A., this past June. She raised $3,000 within a day, sailing past her goal of $1,000 and causing her to question whether resetting the target higher might seem greedy. Brooke assured her that the money would go entirely to Children’s Hospital, so the more the better—a calculation Shira understands perfectly: “If they get more money, then more kids won’t be sick.” She ended up raising $12,000.

Brooke says that Shira’s relationship with the hospital began through family friends who have a child who is a patient at CHLA. Shira grew up alongside her, and her perspective matured early. “I didn’t realize that she was absorbing it to the degree that she did.”

As developed as Shira’s capacity for empathy may be, it doesn’t stop her from acting her age. She departs from talking about Shira’s Story Corner to comment on her friend Elsa who doesn’t like “Frozen.” She’s baffled by what may be her first encounter with irony: How does a girl named Elsa not like “Frozen”?

“I knoooow!” she says, extending the o like someone laying on a car horn. “I’m like, what the heck?”

But the quandary passes and she moves on to the next 7-year-old thing, her new whoopee cushion, getting it to discharge as she vaults onto it with both feet.

A revelation comes when Brooke describes their recent trip to New York. The earlier allusion to Willy Wonka turns out to be fitting; the moment that moved Shira to act on her idea for Shira’s Story Corner came during a performance of “Charlie and the Chocolate Factory” on Broadway.

“It really left a huge impression upon her,” Brooke says, “when Willy Wonka said to Charlie, ‘Your imagination is a powerful thing’—that you can make something out of nothing.”

If Shira has inspired you to give back, consider making a donation to Children's Hospital Los Angeles. Visit CHLA.org/Donate.