No Longer Night-Blind, Natalia Isn’t Afraid of the Dark 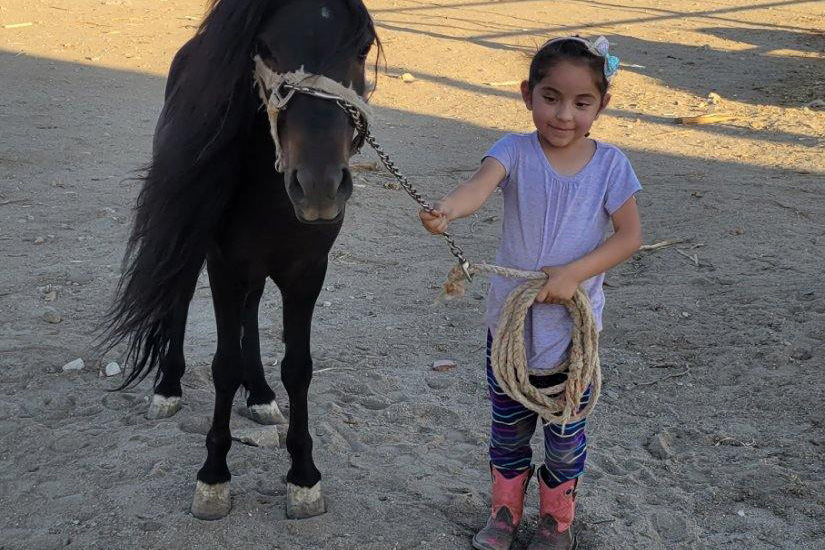 A breakthrough surgery performed at only 10 hospitals in the country significantly improves a 5-year-old's vision.

Natalia loves animals—especially the goats, horses and pony that live on a ranch near her family’s home in Palmdale, California. She and her seven brothers and sisters go to the ranch all the time to walk the animals, brush the pony’s hair or just play in the dirt. But for 5-year-old Natalia and two of her siblings, the fun ends when the sun starts to go down. That’s because they have a rare genetic disorder that makes it nearly impossible for them to see in dim light.

“Once it gets dark, Natalia begins to say, ‘My belly hurts, I want to go home.’ And I say, ‘Why, because you can’t see?,’ and she says, ‘Yes,’” says her grandmother Juana, who explains the darkness gives Natalia anxiety.

As darkness descends on the ranch, Natalia and her 9-year-old brother and 12-year-old sister climb into their grandparents’ pickup truck for the 10-minute ride home. Juana uses the light from her cell phone to help them out of the truck and into the house.

For years, Juana knew three of her grandchildren had something wrong with their sight, and repeatedly asked their pediatrician about it.

“When I take them to school, we walk, and when we go outside, I have to sit them down for 10 to 20 minutes so that their eyes adjust from being in the bright inside light to the darker light outside,” she says.

A diagnosis and potential cure 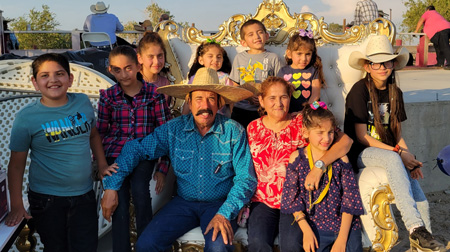 Natalia with her grandparents and seven siblings.

Juana was eventually referred to Children’s Hospital Los Angeles, where she finally got the answers she was looking for. Aaron Nagiel, MD, PhD, Attending Surgeon at Children’s Hospital Los Angeles, ordered a genetic test and learned that Natalia has two mutated versions of a gene called RPE65. The defective genes prevent cells within the retina, the part of the eye that detects light and color, from functioning properly. This can make it difficult for people to see things in their periphery and in low lighting. The mutations can also cause vision to decline over time and ultimately cause blindness.

Approximately 1,000 to 2,000 people in the U.S. have this retinal dystrophy caused by inheriting a mutated RPE65 gene from each parent, according to the U.S. Food and Drug Administration (FDA). Natalia, for example, received two defective copies of the gene, one from her mother and one from her father. People who are born with only one defective copy do not get the disease.

“It’s pretty devastating,” Dr. Nagiel says. “Some parents will notice shortly after birth that their kids don’t really make eye contact or they are constantly staring at lights. And they have a lot of trouble in the dark—they just cannot navigate anything, or identify their toys, or identify objects or obstacles on the ground in poor lighting.”

Symptoms can sometimes appear subtle, however, especially when children are young. “In a brightly lit office setting, a doctor may think the vision is fine, or that the child has some kind of motor or social delay,” says Dr. Nagiel.

A gene therapy approved by the FDA in 2017 has brought hope for the condition, which previously had no other treatment. To deliver it, surgeons inject an inactivated virus whose job it is to deliver a normal copy of the RPE65 gene to the cells in the retina. Children’s Hospital Los Angeles is one of 10 centers in the country that performs this therapy, and the only one in California. Since the therapy was approved in 2017, Children’s Hospital Los Angeles has performed the procedure on 17 children and 10 adults.

Natalia underwent surgery in July. Following the standard practice for the procedure, she had the surgery in one eye first, and in the other eye a week later. Dr. Nagiel uses very fine instruments to make tiny holes in the white part of the eye to access the retina. He removes the vitreous, the gel-like fluid that fills the middle of the eye, and then injects the gene therapy drug using a tiny canula. Each procedure lasts about an hour, after which he covers the eye with a patch. Patients lie flat on their backs for the first day and night to allow the medication to be absorbed.

“We take the eye patch off and usually their eye feels uncomfortable or like there is sand in it. But we start eye drops and ointment and within days the eye is feeling almost back to normal,” Dr. Nagiel says.

In the first few days after surgery, patients tend to remark that things appear very bright, he says. About a week after surgery, they might start seeing things that once appeared too dim to see.

Treated children end up being able to see much better in dark lighting.

“I have a picture of one of my patients biking at night, which she never could have done otherwise,” Dr. Nagiel says.

As for Natalia, the first hint that her eyesight had improved came a few days after both surgeries, when Juana noticed she woke up in the night to use the bathroom and was able to walk in the dark without holding on to the walls. Now at home, Natalia can see better and is less scared of the dark. Her brother Mariano and sister Daniela are scheduled to have their surgeries in October.

Dr. Nagiel says all the credit for the kids’ diagnoses goes to their grandmother, who navigated the medical system even though she spoke very little English, and whose careful monitoring and descriptions prompted Dr. Nagiel to order genetic testing.

“If she hadn’t been persistent and gotten these kids to me, it could have been—who knows—not until their teens or 20s when they got treated,” he says.

Learn more about The Vision Center and Center for Personalized Medicine at Children's Hospital Los Angeles.