‘No Better Place to Be’

Diagnosed with cerebral palsy so severe he was tripping over his own feet, Brady came to Children’s Hospital Los Angeles for treatment. The result? A “night and day difference,” says his mom.

Whenever their son, Brady, performs in one of his many plays, Kara and Brad sit proudly in the audience. During one particular performance two years ago, however, they were beaming even more than usual.

Brady, an 8-year-old theater aficionado, stood tall on stage, poised and steady. It was a stark contrast to just a few months earlier when he swayed back and forth shifting his weight from one foot to the other to maintain his balance—something he had done nearly his entire life after being diagnosed with cerebral palsy (CP) before his second birthday.

“It was really one of the most incredible moments, just a night and day difference,” recalls Kara. “If you weren’t looking for [signs he had CP], you wouldn’t even know he had it.”

CP affects approximately 1 million people in the United States, including 10,000 children born each year. The condition affects the body’s ability to move and can’t be cured, so for many years physical therapy was Brady’s main form of treatment. The exercises helped with muscle training and improving his mobility as his body grew, but as the CP progressed, so did its impact on everyday life. At one point, Brady’s femurs were so rotated that he tripped over his own feet when he walked.

The family had been told that surgery could one day be an option, but it wasn’t a guarantee. According to Robert Kay, MD, Vice Chief of the Jackie and Gene Autry Orthopedic Center at Children’s Hospital Los Angeles, who has been monitoring Brady since his diagnosis, there are several criteria for determining if a child with CP is a candidate for surgery: age (typically 7 to 10 years old), if the patient has “plateaued” and not made substantial functional gains for half a year, and if nonsurgical options have been exhausted. In 2018, Brady checked all three boxes.

“In the most capable hands” 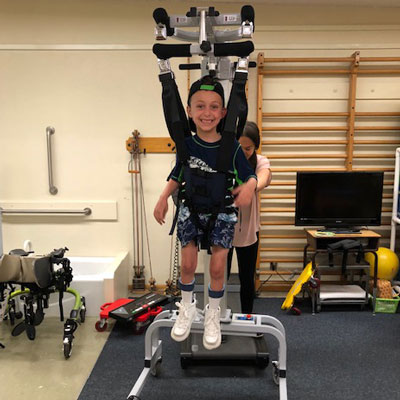 Although the thought of their young son undergoing major surgery was daunting, Kara and Brad felt confident to move forward. “What made us feel so secure was that nobody at the end of the day has the experience or has seen quite as much as Dr. Kay has,” says Brad. “I remember when we first met Dr. Kay, we got a lot of information and it felt like, OK, we’re in for a journey but boy are we in the most capable hands.”

“We would have been happy to do anything to help Brady but I appreciated the fact that Dr. Kay erred on the conservative side and didn’t immediately want to do anything unnecessary on a small child,” adds Kara. “So when he did tell us it was the right time, we knew it would benefit Brady.”

During the two-hour long procedure, Dr. Kay corrected Brady’s alignment by positioning his femur bones outward—they had rotated nearly 40 degrees—and lengthening the tendons by his hip.

What helped make the surgery so successful, Dr. Kay says, was actually what happened prior to entering the operating room: Brady underwent an extensive assessment in CHLA’s state-of-the-art John C. Wilson Jr., Motion and Sports Analysis Laboratory, which uses a 10-camera motion capture system to evaluate a patient’s gait. Strategically placed sensors on the body and force plates embedded in the floor generate invaluable information that allows surgeons to analyze all joints simultaneously, personalize treatment plans and use the data to conduct research.

In Brady’s case, motion analysis testing gave Dr. Kay a clear picture of Brady’s condition to determine exactly how much to rotate the hips. 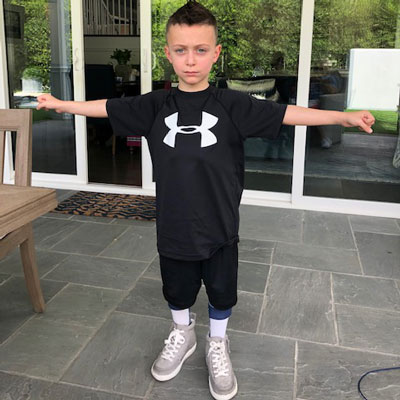 Today, Brady is “doing great and his progress has been fantastic,” reports Dr. Kay. While his physical improvement has been “astounding,” according to his parents, Brady’s effervescence and upbeat attitude have remained constant.

“He has always been the life of the party and loves to perform, but what the surgery did was enable that confidence to continue to blossom even more,” says Kara.

In fact, Brady started participating in group sports, something he had never done before, and began playing basketball with his twin brother, Jackson, and a group of friends.

Watching Brady thrive has brought immense joy to his parents. When they look back on their experience, one of the lasting memories is how welcomed they felt by the doctors, nurses and other caregivers, every step of the way.

“We hope none of our friends and family need to be [at Children’s L.A.],” says Kara, “but if they do, there is no better place to be.”

Whether it’s someone they know or another child in the community, Kara and Brad want to make sure expert pediatric orthopedic care is available to anyone who needs it. As members of the Orthopedic Center Leadership Council, they help raise funds throughout the year to support crucial services like the Neuromuscular Program and the Motion and Sports Analysis Lab, which is the only accredited lab in California and one of just 14 fully accredited motion labs in the country.

“For us, Brady’s experience was a 50 out of 10, but then you look around and see what’s happening for others, too, and that’s when it becomes even more special,” says Brad. “This hospital and its capabilities are unbelievable, and I truly feel like it’s a diamond in the middle of the city.”

To support the Jackie and Gene Autry Orthopedic Center in honor of Brady, visit http://connect.chla.org/goto/bradychla.