As Mitchell Turns 11, His Heart Turns 10 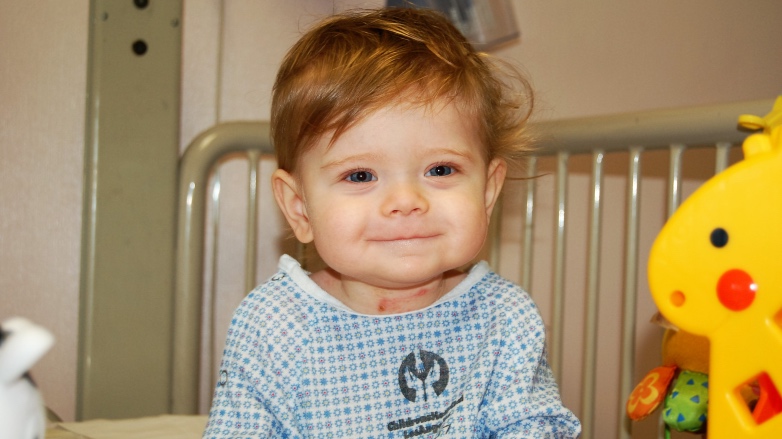 Marnie Blakey doesn’t remember anything about Feb. 5, 2007—anything before 10 p.m., that is. The phone call came at 10. She will always remember it, and of course, everything that followed. 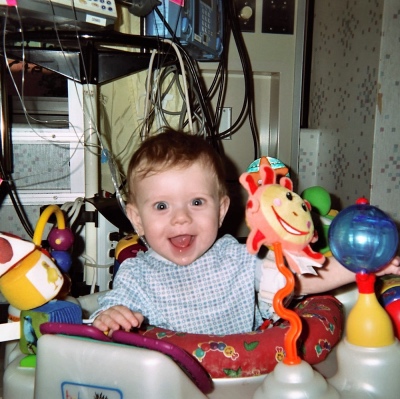 Prior to that call, though, the day is a blank. Did she force herself out of bed that morning, the familiar dread and despair in her stomach, and drive from her Irvine home to Children’s Hospital Los Angeles? Did she arrive at 7 a.m. and spend the next 12 hours beside her 10-month-old son, Mitchell, watching helpless as he lay dying in his intensive care crib?

Or was it her husband, David, who went to see Mitchell that day, while she stayed home with their then-3-year-old son, Dylan? Or, with Mitchell so close to death, had they both gone to the hospital, instead of trading off like they had done for 78 straight days?

“I really don’t remember,” Marnie says now. After all, it doesn’t matter. All that mattered was the call from CHLA at 10 p.m., and the words she heard coming from the phone:

“We have an offer for a heart for Mitchell.”

When Mitchell was born, his parents had no idea of the heartache they’d soon be facing. He was a healthy, full-term baby, and for the first six months of his life, he was growing and developing right on schedule.

But in September 2006, everyone in the family caught a terrible cold. Marnie, David and Dylan soon recovered, but Mitchell continued to cough and wheeze.

Marnie, who is a pediatrician, didn’t like the sound of it. A chest X-ray revealed that Mitchell’s heart was enlarged, and after a visit to a cardiologist, the family learned the devastating diagnosis: Mitchell had dilated cardiomyopathy. 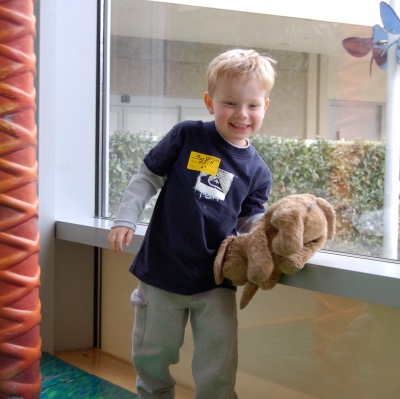 Dilated cardiomyopathy is a condition in which the heart becomes enlarged and weakened and cannot pump blood efficiently. Doctors don’t know why Mitchell developed it, but his case was severe—his heart was pumping just 13 percent of his blood, instead of the normal 55 percent.

When medication failed to reverse his condition, Mitchell’s only hope was a heart transplant. He was airlifted from a local hospital to CHLA and admitted to the Pediatric Intensive Care Unit (PICU), where he was put on potent heart medicines and placed on the waiting list for a transplant.

The family settled in for a torturous wait—hoping a heart would be available in time.

Days stretched into weeks, and then months. Mitchell slowly slid backward. He stopped crawling and playing. His smile went away. Eating and breathing became difficult, and his skin turned gray and sweaty.

When the call came about the heart for Mitchell, the Blakeys were in disbelief.

“I kept saying, ‘What? What?’” Marnie recalls. “I couldn’t believe what I was hearing. I just had this overwhelming sense of hope and relief that he would at least have a chance.”

The next day, Feb. 6, 2007, Mitchell received his new heart. Renowned pediatric cardiothoracic surgeon Vaughn Starnes, MD, co-director of the Heart Institute at CHLA, performed the surgery, and Mitchell emerged with his skin glowing pink and warm. 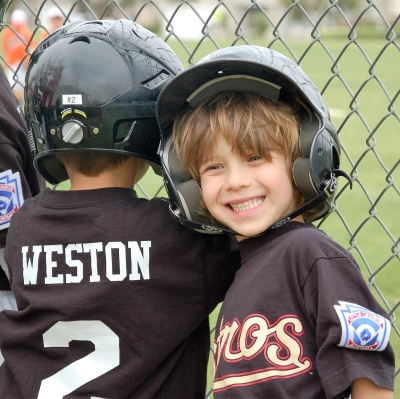 “He’s absolutely thriving,” says Jackie Szmuszkovicz, MD, a pediatric cardiologist at CHLA who has taken care of Mitchell since he was 7 months old. “It’s amazing how much we learn about strength and resilience from these young patients. Mitchell is one of those patients I’ve learned that from.”

Mitchell, who will turn 11 later this month, is now a healthy, active fifth-grader. Because he takes immune-suppressing medicines to prevent rejection of his transplanted heart, he does get sick a little more often, and he goes to CHLA for regular checkups of his heart and other organs.

Still, he lives “an almost completely normal life,” his mom says. An excellent student, he is the proud holder of a third-degree black belt in taekwondo, plus he plays flag football and Little League baseball. His mom describes him as tenacious, empathic and “a little bit of a rascal.”

“He loves pushing his limits and getting into trouble!” she says with a laugh.

She admits that she and David occasionally have “Mitchell moments”—moments when they worry about the future. The first pediatric heart transplant took place in 1984; immune suppression therapy has greatly improved since then, and today, the oldest survivors of infant heart transplants are in their 20s.

"When we were putting Mitchell on the list for a transplant, they told us, ‘You’re getting a treatment, not a cure,’” Marnie says. “Mitchell’s done so well, we have every reason to believe he’ll live many, many more healthy years. But there are no guarantees.”

She and David think more often about the donor of Mitchell’s heart. They never forget that their son’s life has been made possible by the generosity of another family—who, when faced with their own tragedy, chose to give another child a chance at life.

“I think about how heart-wrenching their situation must have been,” Marnie says. “The feeling is just true, pure gratitude.” 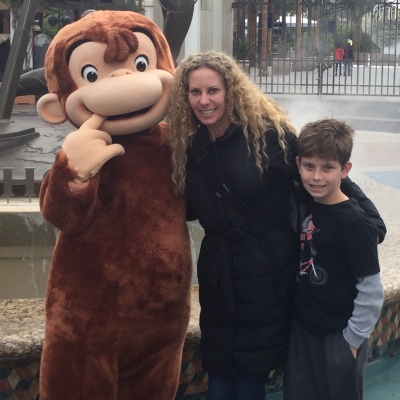 On Feb. 6, 2017, Mitchell and his family celebrated the 10th anniversary of his heart transplant.

Mitchell’s “Heart Day” has become like a second birthday for him, and in typical 10-year-old fashion, he wanted to spend it at Universal Studios. It was a Monday, but who cared? His parents let him miss school—a rare treat—and the family spent a wonderful day at the park.

Just as they were getting ready to leave, though, they spotted one of the park characters, Curious George. They stopped in their tracks.

“When Mitchell was waiting for his transplant, his favorite thing was to watch Curious George on PBS. He watched it every morning in the hospital,” Marnie explains.

They took a photo with Curious George. It was a special ending to a special celebration—and yet another moment they will always remember.