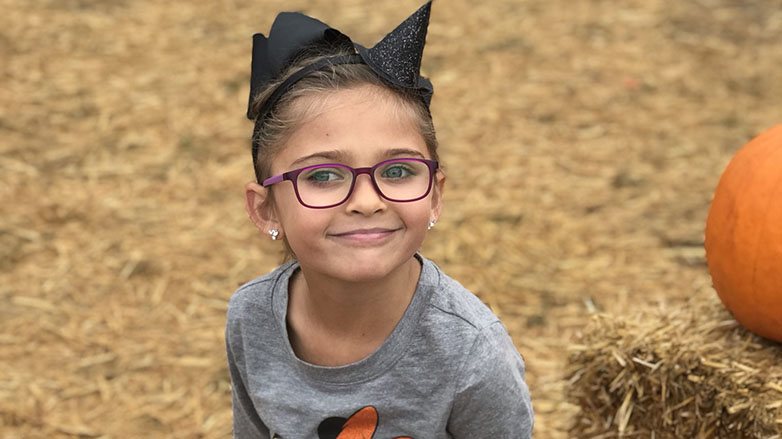 The dawning of gene therapy at CHLA saved a 5-year-old girl from inevitable blindness.

You will have to grant a parental pardon to Heather for her momentary excessive permissiveness, allowing her 5-year-old daughter to race down the block after dark, free from her mother’s hand. It wasn’t just that the cool house on the street was all done up for Halloween, or that it belonged to Heather’s sister. It was the dark itself that was the thrill. 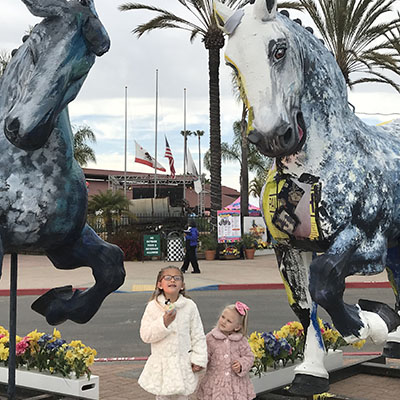 Only a month earlier, Heather would have had Monroe virtually clamped to her side. As an infant, Monroe would always turn away from the dark, fixing her eyes on the recessed lighting installed near the ceiling in the family’s living room. No amount of silly faces, animal impersonations or got-your-nose tricks could get her to engage in eye contact, or to look away from the sunbeams coming through a window.

For months Heather’s pediatrician told her nothing was out of the ordinary. Monroe was still “discovering” her eyes, she said. Over time she got a notion that autism was the source of Monroe’s symptoms, which grew to include multiple missed milestones that were consistent with the disorder. If you waved, Monroe didn’t wave back; she wouldn’t sit still, or look in the direction of a pointing finger.

The doctor referred Heather to a facility near her house in San Diego, where Monroe was given the standard circuit of tests and therapies. Heather was inclined to believe what she was told, even if it didn’t match what she witnessed at home. “The doctor had me convinced she was autistic,” she says. “I was like, ‘Well, then that’s it. That’s what it is.’”

But after starting therapy Monroe began walking—and bumping right into walls. “We had a stair in our house—just one stair,” Heather says. “She would always miss it. She would always fall.”

On what turned out to be her last appearance at the autism center, a staff member put Monroe in a dark, tent-like space, as Heather describes it, employing it as a calming safe zone. It was just the opposite. Monroe came scampering out toward the light, bawling.

That was enough. Unable to get through to her pediatrician, Heather found a new, more amenable one, who sent her to an ophthalmologist at the local children’s hospital.

The ophthalmologist found that Monroe’s pupils would enlarge when encountering bright spaces and shrink in darker surroundings—the opposite of how they’re supposed to behave. He had her undergo an electroretinogram, a sophisticated vision test that checks the response of the light-detecting cells in the retina. All of Monroe’s mystifying behavior—walking into walls, glaring at the glow of the TV set, failing to respond to a wave—was about to be explained.

The test showed Monroe had Leber’s congenital amaurosis (LCA), a rare, inherited eye disease that disrupts the retina’s capacity to respond to light. Overall eyesight deteriorates, but the main impairment in children is to the rod photoreceptors, the part of the eye that’s called on in dim surroundings, leaving the LCA patient unable to see in the dark, or even in soft light.

A blood sample confirmed that Monroe had a mutation in the RPE65 gene, which governs the production of a protein that provides for healthy vision.

“I asked the doctor, ‘Well, what does this mean?’” Heather says. “He said, ‘Your daughter at some point is going to lose her vision.’”

He said the condition had no remedy, but offered a vague, insinuated hope. “Maybe there will be something available at some point,” he told Heather, “but right now we have nothing.”

News of a breakthrough

What Heather did not know was that a group of researchers had reached the final phase of a clinical trial on a drug that would soon land like a cannon shot across the medical field. The drug, called Luxturna, carries a healthy, functioning copy of the RPE65 gene in liquid form that gets injected below the patient’s retina. Once the replacement gene arrives, the retinal cells have what they need to produce the protein that enables normal vision.

When the FDA approved the drug in December 2017, it represented a monumental breakthrough—the first federally approved therapy to replace a defective gene responsible for an inherited disease of any kind. The cryptic hint of optimism that her ophthalmologist seemed to suggest was transformed into genuine possibility.

“I never thought I’d see the day,” Heather says. “I wanted Monroe to be the first one.”

She reached out to the drug’s developer, and the company worked with her on submitting all of the necessary records, getting insurance coverage—without insurance, the cost of the procedure was $425,000 per eye—and finding a doctor who could perform the procedure.

The latter effort led Heather on a 98-mile drive north of her home, to see Aaron Nagiel, MD, an ophthalmologist at The Vision Center at Children’s Hospital Los Angeles, one of a select group of physicians who had been trained and approved in the use of the new medication. He was open with Heather about the risks, but also about the realities. Monroe’s vision was certain to degenerate if nothing were done. 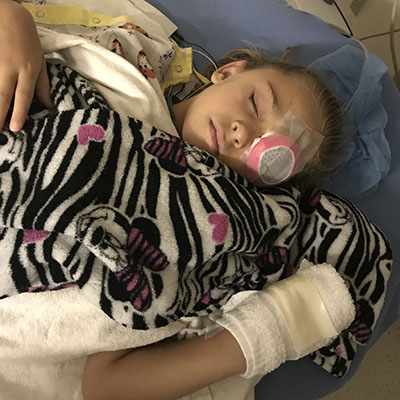 “One of the biggest things I tell families is that we know the natural history of this condition, and it’s always a steady decline,” Dr. Nagiel says. “It’s not like some patients do OK and other patients do poorly. They all do poorly.”

Monroe’s daytime vision was starting to fail, and she had already been designated legally blind. The results from the phase 3 clinical trial indicated that Luxturna could not provide perfect vision, but now three years out from treatment, those patients had reported enduring improvements, including the ability to see better in the dark, without any major side effects. “That’s as far out as we know,” Dr. Nagiel says.

He may not have had 20 years of data to lean on, but Dr. Nagiel could provide an assurance that he had done the procedure, called a vitrectomy, countless times. He just hadn’t done it for the purposes of conducting gene therapy. Virtually any time that eye surgery requires manipulating the retina, a vitrectomy is done. The technique involves making small incisions through the white part of the eye to clear out the vitreous gel inside. This instance would be no different, yet he couldn’t block out the magnitude of it.

“I didn’t sleep very well the night before the first surgery, in March,” he says.

Monroe was set to be the third CHLA patient to have the procedure. Her surgeries were scheduled a week apart, the left eye—the worse one—on Aug. 14, the right eye on Aug. 21. In the meantime, Heather set out to prepare for the worst-case scenario.

“I didn’t know if I’d wake up the next day and Monroe wouldn’t have her sight,” she says. “Whatever she wanted to do, we did. Time was ticking.”

They made weekly trips to Disneyland, and regular outings to Monroe’s other favorite pastime: the racetrack. She couldn’t see the horses run, but she could hear them rumbling down the final stretch of track. She started calling them go-gos after hearing her mother and sister cheering “Go, go, go!” She would yell out, “Mama, the go-gos are coming! The go-gos are coming!”

“I just thought, if she loses her vision tomorrow,” Heather says, “at least I could say I did all that Monroe wanted.”

Afterward, Dr. Nagiel could only wait for Monroe’s response. Diagnostic tests wouldn’t be done for a few months. The proof would be in the patient’s feedback.

On Aug. 19, five days after the surgery, Heather dropped the lid to a tube of ointment on the carpeted floor of her hotel room. It was a dark blue print, not conducive to finding a tiny black cap. Heather was fishing around for it when Monroe told her to hang on a moment. She covered up her right eye, and using only her left, surgically treated eye, she nabbed the cap on the floor and handed it to her mother.

It was a hallelujah, aha and Eureka-I-have-found-it revelation all forged together. She cried out, “I found the cap! I can see! I can see!”

Till that point, Heather was always picking up after Monroe, who would drop things and be unable to find them. “A Starburst,” she recalls as an example. “A pink Starburst. And we have a tan carpet.” The tables had turned in an ironic but exhilarating way.

As Heather stifled her tears, Monroe turned into a human Roomba, cleaning things off the floor and delighting in her new vision. Hey, there’s the remote!

The second surgery was only two days later, and now the anticipation for fixing the other eye grew. Another five days after the procedure, Monroe and her mother and sister went to Disneyland. As their boat sailed through the darkened “It’s a Small World,” Monroe began pointing out what she thought were new attractions—Jasmine and Aladdin; Lilo and Stitch.

Heather was happy to play along, but her elder daughter, Destiny, wouldn’t cooperate. “Monroe, you’re not right,” she told her. “Those have always been there. You just couldn’t see them.”

In his office, Dr. Nagiel glances at his phone. It’s Heather. “She just texted me,” he says. He reads aloud: “This is Thursday at 7:30 at night. We were at a street fair and Monroe was walking around all by herself without any help. That would’ve never happened before.”

He receives a running ticker of updates from Heather and other LCA families testifying to sights newly seen: clouds, fireworks, birds flying overhead.

The stories are more than gratifying; they serve as evidence of the treatment’s effectiveness, which is “in some ways a lot more meaningful than whatever number or quantitative data we could get,” Dr. Nagiel says.

“You’ve seen that video of her running through the street?” he asks. “That’s just like … ” He waits for a word to cover the enormity of it. “It’s like biblical. It’s from the Old Testament, the improvements that these patients have. 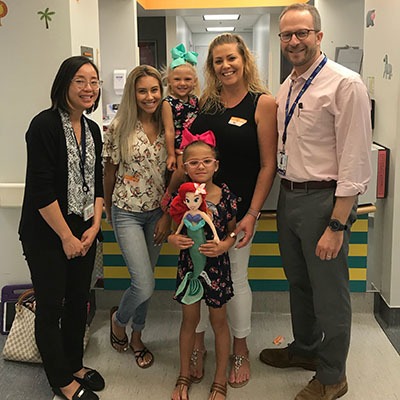 “It’s a very special thing for me,” he says, noting that CHLA is one of only 10 institutions approved to perform the procedure, the only one in California, and has done more than any other site since the FDA moved the drug forward. “For all of medicine this is the first gene-replacement therapy, and we’re the ones doing it.”

He says vision tends to improve up to eight weeks after the surgery and then levels off. Monroe’s will probably stay where it is today. Earlier she had been complaining of headaches and problems seeing; a visit to CHLA showed that her improved eyesight was to blame. She had gone from 20-300 to 20-125 and her eyeglass prescription needed a reset.

A while back, she went to Movie Night at school. Heather thought of joining her but backed off. “I have to give her her wings,” she says.

When the lights went down before the movie began, Monroe turned to her friend with concern. “I can’t see,” she whispered. The girl answered back, “I can’t see either.”

Well, that was good to know. She felt relieved. Sometimes the dark is just the dark.

Read and watch Monroe's story as covered by ABC News.