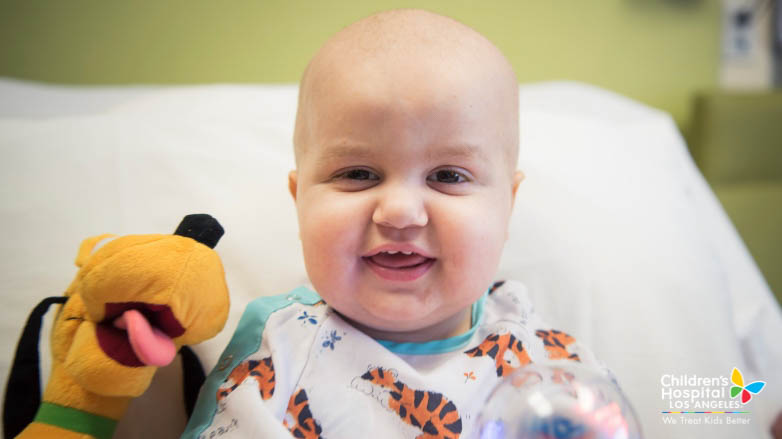 On a bright, sunny weekend in March 2017, Aubrey and Tyler Kelly decided to celebrate their new family of five with a camping trip before the end of Tyler’s paternity leave. They piled their three kids—4-year-old Sierra; Pierce, not quite 2; and Harper, only 4-and-a-half weeks old—into the car and headed for the Kern River from their home in Thousand Oaks.

They pictured toasting s’mores around a campfire and shooting stars. Instead, that evening, Pierce had cold sweats and seemed lethargic. The next morning, his eyes were swollen; one had a bruised tint, and both ears were infected. Thinking he had a virus, Aubrey and Tyler drove straight to their pediatrician’s office, where they got a prescription for antibiotics. But, over the next few days, Pierce kept getting worse.

On April 7, the family checked into a hospital near their hometown for blood tests.

That evening, doctors told the Kellys Pierce needed to be transported immediately to Children’s Hospital Los Angeles to confirm a suspected diagnosis of leukemia or lymphoma. “Our world was rocked,” says Tyler. "Everything flipped upside down," adds Aubrey.

At Children’s Hospital, tests revealed the bad news. Not only did Pierce have leukemia, the most common cancer in children and teens, he had acute myeloid leukemia, a more rare form of the blood cancer, which can progress quickly if not treated.

The medical team at the Children’s Center for Cancer and Blood Diseases—the largest pediatric hematology, oncology and blood and marrow transplant program in the western U.S.—sprang into action. Pierce was prepped for the operating room, where he would have a PICC line (peripherally inserted central catheter) inserted into a vein to allow for administration of chemotherapy. Because the leukemia was in his spinal fluid as well as his blood, he also would need a lumbar puncture.

The Kellys had never been to Children’s Hospital. “As a parent, you don’t want to need a children’s hospital,” says Aubrey, “but we feel blessed that Pierce was diagnosed and treated at CHLA—it means he had the very best treatment from day one.”

CHLA would become their second home. Pierce would spend 115 days in the pediatric hospital. During that time, he had two rounds of chemotherapy and a bone marrow transplant, went under anesthesia 15 times, and underwent 31 platelet transfusions and 15 blood transfusions. 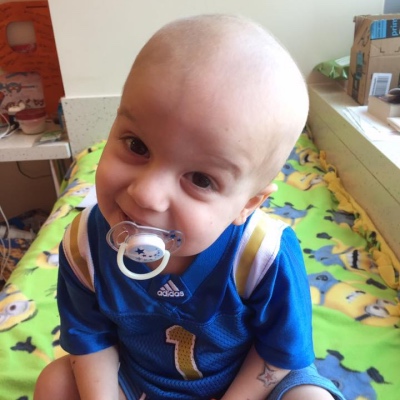 The Kellys' “new normal” was a hospital room on 4 West. Aubrey slept in Pierce’s big bed, while Harper cozied in a crib the nurses brought in, and Aubrey’s mom, Bernice Merryman, used the fold-out family bed. Tyler returned to work and kept up some semblance of every day life at home for Sierra.

Because Pierce’s cancer was so aggressive, doctors began talking right away about a bone marrow transplant—replacing Pierce’s cancerous cells with healthy stem cells from a donor—as the toddler’s only hope.

In the meantime, Aubrey and Tyler tried to adjust to their new reality. Because they work at a biopharmaceutical company, they understand the lingo of cancer—“a blessing and a curse,” she says. The medical staff told the Kellys, “You let us be the professionals, and you be the parents.” They tried to put that advice into practice.

“We learned early on to lean on the nurses, physicians and Child Life specialists, and on everything that makes CHLA so incredible,” says Aubrey. “They helped us figure out what it means to be the parents of a cancer kid, and helped me be the mom I wanted to be during that time.”

She’s thankful for the mom she met during Pierce’s first round of chemotherapy who said, “You bloom where you’re planted.” And she wishes she knew the identity of the Children’s Hospital employee who saw her sobbing in an elevator one day, put her arm around her shoulder and said, “You’re in the right place.”

As the days sped by, the Kellys took advantage of all CHLA had to offer families, including kid-friendly playrooms and music therapy. To make trips to the operating room easier for Pierce, Aubrey and Tyler called the transport gurneys “airplane beds.” The toddler nicknamed wheelchairs “airport chairs.” They would roam the hallways trying to spot them or waving at other patients.

In June, Pierce marked his second birthday with a party on 4 West. It happened to fall on the unit’s regular “Minion Monday,” so that became the theme for his celebration.

Meanwhile, the BMT team’s hunt for Pierce’s donor had gone international. So had the Kellys'. Aubrey launched a social media campaign with the hashtag #FiercePierce and produced (and starred in) a video posted on YouTube encouraging donor registration. Be the Match, operated by the National Marrow Donor Program, picked up the video and it went viral, bringing in more signups.

On July 20, Day 86 in Children’s Hospital, as Pierce started his second round of chemotherapy, the word finally came. A single donor had been identified in France, and her human leukocyte antigen (HLA) protein was a 10-out-of-10 match with Pierce’s. As the donor entered a hospital to have her stem cells harvested, nearly 6,000 miles away in Los Angeles Pierce underwent more chemotherapy to prepare for the donation.

Less than 48 hours later, Aubrey and Tyler sat in the BMT Unit at CHLA and watched the potentially life-giving cells drip into their son’s veins. All the things that had to work to make that happen—the coordination of medical teams in two separate countries and an ocean apart, the quick passage through customs, the delivery of the precious cargo to CHLA’s door—remain a “marvel” to Pierce's parents.

Their son would spend almost six more weeks in Children’s Hospital as his immune system responded to the new cells and rebuilt itself. He battled rashes and fever, both signs of graft-versus-host disease, a condition in which the donated stem cells view the recipient’s body as foreign and attack it.

The transplant took. By the end of August, Pierce was declared cancer free.

On Aug. 29, the BMT team formed a human tunnel in a hallway, and Aubrey carried her son through it. As they walked past the hospital’s front doors, Pierce looked up at the blue summer sky and said one word: “Outside.”

With his immune system still fragile, Pierce, Aubrey and Harper weren’t able to go home to Thousand Oaks just yet. They spent a week at nearby Ronald McDonald House, then moved into the home of relatives in La Canada, close enough for regular visits to CHLA over the next two months. To take them there, his father arranged a caravan of vintage Ford Broncos—Pierce’s favorite car, and the same one the Kellys drove to the delivery room for the birth of each of their kids.

The family would still be separated for the most part to protect Pierce from exposure to germs, except on occasional joyous occasions, like on Halloween, when they all gathered together, all three kids dressed as dragons.

Then November came, and the doctors at CHLA determined that Pierce was well enough to go home. On Nov. 4, the entire Kelly family was reunited. It was the first time they had all been together in their own home in nearly four months.

By then, that YouTube video had garnered 4.5 million views and counting, and more than 9,000 people had signed up with Be the Match to be marrow donors. “Ours is a story of success and hope,” says Aubrey. “I feel really blessed that our story has resonated with people.” 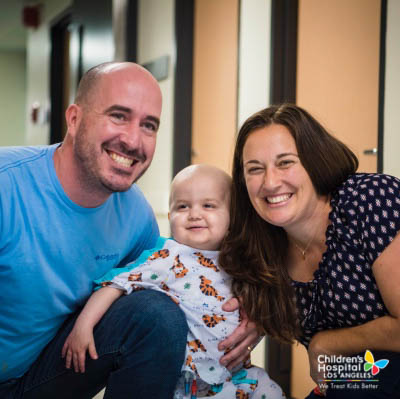 She and Tyler are determined to continue the campaign for more donors. And they have organized blood drives for CHLA.

Pierce’s DNA is now “100-percent French,” his mother jokes, and his blood type has switched from its original type A positive to the donor’s O negative. The Kellys sent an anonymous thank you note to their donor, and hope to meet her, if she wants to, when the first post-donation year is over.

Pierce, who returns to CHLA for weekly checkups, is adjusting to having a bedroom all to himself, complete with a handcrafted airplane bed built by a family friend. A typical two-year-old boy, he loves helicopters, trucks and car washes. “He’s just a little dude,” says his proud mom.

"It feels like cancer is harder on the parent than the patient. And I'm okay with that," says Tyler. "We consider it a blessing that we shoulder that burden. As he grows older, I'm hoping he doesn't remember any of this and it's a fuzzy recollection of airplane beds and stories that we tell him."

Pierce is weaning off some medications, but will need to take immunosuppressants to prevent rejection of his new stem cells until July 2018. Before that, he can’t attend day care or go to public places like Disneyland. The Kellys don’t mind. They’re happy to have reached this part of their journey. “Our house is filled with the kind of laughter and squealing you can imagine with three kids under 5,” says Aubrey. “It’s wonderful.”

Just like Pierce, many kids at Children's Hospital Los Angeles are fighting aggressive diseases. Together, we can give these kids the life-saving treatments they need and discover cures that can be shared here, and around the world. Give today at CHLA.org/GiveLA.