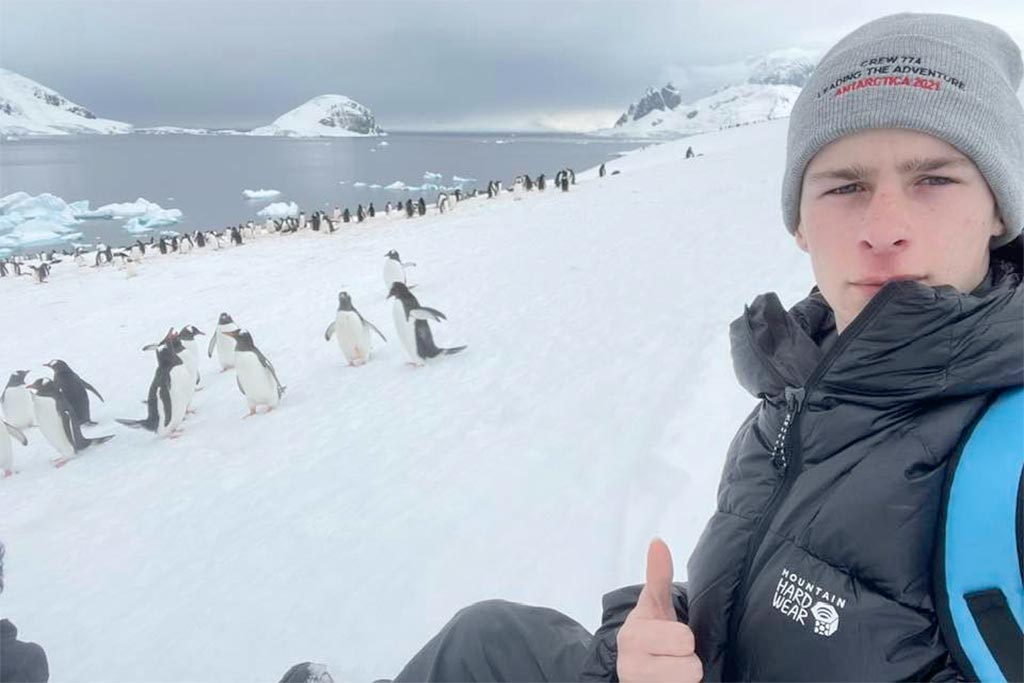 Ask Reid how he spent his most recent holiday break last December and he will regale you with palpably descriptive details of the three-week Antarctic expedition he and 16 other fellow Scouts embarked upon. 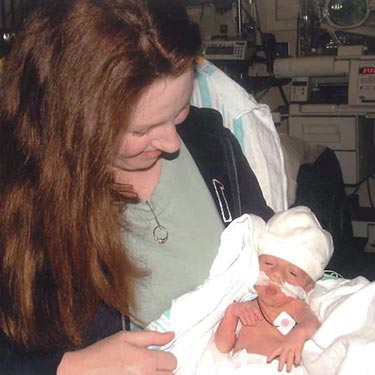 Newborn Reid in the NICU with his mom, Carrie

While other kids his age played video games over winter break, Reid, 14, and the Boy Scouts of America Venturing Crew 774 embarked upon the adventure of a lifetime that included enduring violently turbulent seas through the Drake Passage, ice camping, kayaking, mingling with Gentoo penguins on a glacier, tango lessons in Buenos Aries, a strenuous two-day hike in the Patagonian wilderness to Mount Fitz Roy, and a teeth-chattering polar plunge.

“One shot at glory!” Reid quips about seizing the opportunity to join the first-ever Scout expedition to the southern continent. “Most of the people on the boat with us were at least 50. I’m pretty self-sufficient for a 14-year-old, so I knew I would be able to do the trip without my mother—and I was.”

Despite her son being the youngest person on the trip, Reid’s mother, Carrie, says wasn’t worried because “he’s always up for a challenge. He has been from day one.”

In fact, while Reid was in the womb, he exhibited signs of strength and confidence. Pregnant with twin boys, Carrie says her doctor would refer to them as Baby A and Baby B. Baby A was Reid’s brother, William, whose development was normal. But Reid—Baby B—was significantly smaller and struggling.

“From the very first scans it was evident that Reid was not doing well,” Carrie says. “At each appointment the doctor would tell me, ‘When you come back next time it’s possible Baby B may not be alive.’ But I would say right back, ‘I hear you, but I’m confident he’s going to be great.’”

In week 36 of the pregnancy, doctors discovered that Reid was no longer receiving oxygen in the womb. Carrie rushed to the hospital where both babies were delivered.

“He made it out alive. That was step one,” Carrie says, noting that Reid was only 2 pounds. Both boys were hospitalized after being born, but “Reid was so tiny and on life support in the NICU. He was 4 pounds when he was discharged two months later.”

The weeks and months that followed were filled with numerous trips to and from the pediatrician and local emergency department.

While William thrived, “I was having so much trouble feeding Reid. Food wouldn’t stay down. He vomited just about every day, sometimes multiple times a day. I kept going back to the hospital and telling them I knew something was wrong and they would say, ‘He’s doing great,’” Carrie remembers. “Their expectations for Reid were very low and he was exceeding their expectations, so they would send us home.”

Carrie continued to do her best to get as much nutrition into Reid’s tiny body. When he turned 1, his weight was equivalent to that of a typical 3-month-old. Carrie refused to accept this was as good as things would get for Reid. After researching specialists in the area, Carrie made an appointment at Children’s Hospital Los Angeles where doctors discovered Reid’s esophagus was severely constricted, which made swallowing food nearly impossible. 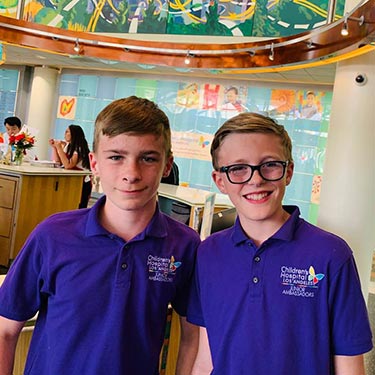 Reid (left) and his brother, William, serving as Junior Ambassadors at CHLA

“One of the beautiful things about working at a place like Children’s Hospital Los Angeles is we get the opportunity to see things that other people have struggled to figure out, and we have the capacity to fix those issues,” explains James Stein, MD, MSc, Senior Vice President and Chief Medical Officer at CHLA. “We were confident we would be able to get Reid to a point where he would be able to eat normally and go on to live a normal life.”

Reid’s esophagus contained a ring of cartilage, a soft bone that is found throughout the body but not normally in the esophagus. Dr. Stein performed the initial surgery to remove that ring of abnormal tissue, then sewed the two ends of the esophagus back together. Because the tissues tend to narrow as they heal, over the course of the next 18 months, Dr. Stein performed a series of follow-up dilation procedures to stretch out Reid’s esophagus and help it maintain its normal diameter.

When he was 3, Reid had his last esophageal procedure. He’s thrived ever since.

“He doesn’t have any constraints on his life. He’s a completely healthy 14-year-old,” says Carrie. “Our family owes so much to CHLA.”

‘What a tough kid’

Today, Reid is a high school freshman who enjoys music, traveling and, of course, the Boy Scouts of America, which he’s been involved with for five years. He’s currently working on becoming an Eagle Scout and is eager for his next adventure after trekking to Antarctica.

“They say once you have this kind of experience you catch the Polar bug,” says Reid, who proudly unfurled the American flag on the southern continent. “It’s like a drug—you can’t get that serene beauty, untouched nature high from anywhere else in the world. I heard they may plan to do another trip, and it would not only go to Antarctica but South Georgia and the Falkland Islands. If they do, I’m in.”

Dr. Stein can’t help but marvel at what Reid, a former CHLA Junior Ambassador, has accomplished.

“What a tough kid. He survived being so small at birth, went through a major surgery successfully and has gone on to lead a normal life,” Dr. Stein says. “Seeing him as a healthy teenager and hearing about the things he’s doing makes every day at work a little more exciting.”

“Originally it was thought I would be about 5 feet tall,” says Reid. “My first three years of life were strenuous, and I had to fight. But I managed and now I’m 5’9.” If it wasn’t for Dr. Stein, I wouldn’t be here today.”

Reid and his family have registered for Walk and Play L.A., a family-friendly community event that celebrates and supports the health of children in Los Angeles while uniting the robust Los Angeles sports community. The event will include a 3K walk, live music and an interactive family festival for all ages. All funds raised through team peer-to-peer fundraising will ensure all patients receive the lifesaving and critical care they need.
Join them by registering today and make the greatest impact for our young patients like Reid.