If you see 4-year-old Adrian obediently eating his vegetables at Children’s Hospital Los Angeles, you can be sure of one thing: It’s almost time for him to go to the hospital’s new epilepsy playroom.

“We’re able to negotiate almost anything with him if it’s time for the playroom,” says his mom, Iris, laughing. “He really looks forward to it. We can get him to take a bath; we can even get him to eat vegetables!” 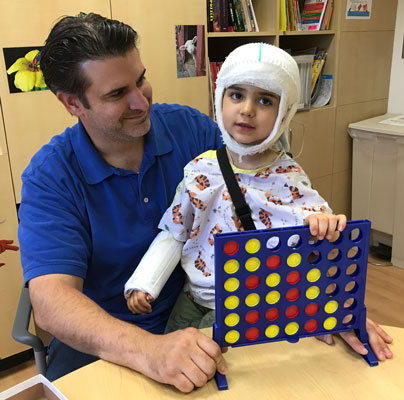 The playroom is close to Adrian’s heart for good reason. During the days he has to be in CHLA’s Epilepsy Monitoring Unit (EMU), he’s stuck in his room most of the time—hooked up to equipment that helps his doctors watch and record his seizure activity, 24 hours a day.

In the playroom, though, Adrian is free to be a kid again. His favorite activities are “grilling” chicken kabobs in the playroom’s kitchen (complete with sizzling sound effects) and filling a “Connect Four” game rack with chips—and then gleefully watching the chips fall to the table.

For Adrian, it’s all fun and games. But behind the scenes, doctors are measuring every second of his brain activity—and watching for seizures.

The playroom, which opened earlier this year, is the only epilepsy monitoring playroom in Southern California and one of only a few in the country. It’s the realization of a career-long dream for Deborah Holder, MD, Director of the Comprehensive Epilepsy Center at CHLA.

“I’m so excited,” Dr. Holder says. “Before, children in the EMU had to stay in their hospital room the entire time, up to two weeks for some patients. Being able to go to the playroom now is a huge motivator for them.”

Typically, EMU patients are monitored in their rooms via video cameras and EEG electrodes, which record their brain waves and detect seizure activity 24 hours a day. But now, a nearby hospital playroom has been wired with that same technology—ceiling-mounted video cameras and Bluetooth-enabled EEG equipment. 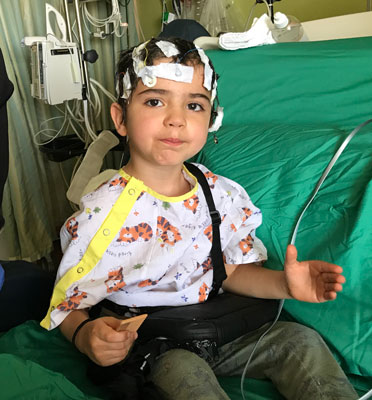 That allows EEG technologists, located in a control room down the hall, to monitor patients’ brain waves and watch their every move as they play—correlating brain wave activity with clinical signs of seizures. The only time patients aren’t recorded on video is when they’re walking to and from the playroom. But even then, EEG data is recorded and stored on a tiny battery pack, which fits inside a lightweight backpack the patients wear. No data is ever lost.

“Advances in technology, with everything getting smaller and lighter and more portable, are what make wiring a playroom like this possible,” Dr. Holder says. “Children’s Hospital saw my vision and made it happen.”

The playroom is staffed by CHLA’s Child Life specialists, and epilepsy patients have a special hour of the day when they visit. (Other hospital patients use the playroom—with cameras turned off—during the other hours.)

Besides giving families a break from their hospital room, the playroom offers patients a chance to meet and play with other children who have epilepsy—often for the first time. Meanwhile, doctors can monitor seizures while kids are at play, not just relaxing in their rooms.

“It helps us simulate that more normal environment that they’d have if they weren’t in the hospital,” Dr. Holder says. “We actually want patients to have their typical seizures when they’re in the EMU, so we can record them, see where they’re coming from in the brain and ultimately achieve better seizure control.”

Adrian’s journey with epilepsy started in October 2017, when he was just 2 ½. Prior to that, he had been a healthy, active toddler who loved to run and play outside.

But one day at the park, his parents—Iris and Marc—noticed that he seemed clumsy. Every time he ran to kick the ball, he’d stumble. A couple of weeks later, he fell at daycare and had to go to a local emergency room.

Multiple tests came back normal, but Adrian continued to have episodes of clumsiness and imbalance—called ataxia—and would sometimes have tremors as he slept. After several months under the care of a neurologist, he was referred to Wendy Mitchell, MD, a pediatric neurologist at CHLA.

Dr. Mitchell immediately suspected that Adrian was actually having seizures. A short stay in CHLA’s EMU confirmed it: He was having thousands of small seizures a day. The diagnosis: epilepsy. 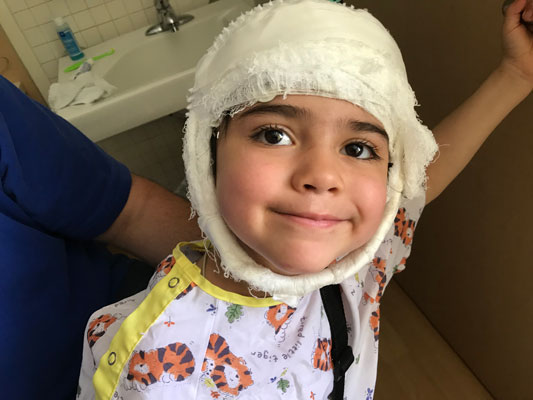 “Some of his seizures are really tiny,” Dr. Mitchell explains. “I can see them very subtly, but even I can’t pick up all of them. Sometimes it’s just a little tiny head nod or a momentary stare.”

Research has shown that inpatient video EEG monitoring can be critical for diagnosing children with epilepsy and in guiding treatment decisions. A 2011 paper in the journal Seizure, for example, found that this monitoring led to a diagnosis in more than 90% of pediatric patients and resulted in treatment changes in 66% of children studied.

Regular EMU stays are important for Adrian because his seizures are difficult to manage and detect. “The video EEG monitoring tells us how many seizures he’s having, and it gives us a detailed picture of exactly what he does when he has a seizure,” Dr. Mitchell notes.

Adrian’s mom says she is grateful for the care Adrian is receiving at CHLA. The hospital’s Comprehensive Epilepsy Center has level 4 certification—the highest available from the National Association of Epilepsy Centers—and offers a full range of diagnostic care and treatment options for epilepsy.

“I feel like we have the experts looking at our child,” Iris says. “They’re really fighting for Adrian.”

The playroom, of course, is an added bonus.

“It’s a lot of help for us, because otherwise we’re stuck in the hospital room,” she adds. “A 4-year-old wants to do things! The playroom allows him to just be a kid again.”