Published on
May 29, 2019
Categories:
Imagine Magazine

The legendary boxing champion and his wife are using their foundation to bolster CHLA’s efforts against pediatric diabetes.

Who could miss the sweet irony of a man called Sugar taking aim at diabetes and obesity?

Certainly not Sugar Ray Leonard himself, though he might suggest that the irony, like a glass of iced tea, be taken unsweetened. But it makes absolute sense that Leonard, whose celebrated boxing career included an Olympic gold medal and multiple world titles, has turned his post-boxing life toward battling endocrine disease.

Over the past several years, the Sugar Ray Leonard Foundation has given more than $450,000 to Children’s Hospital Los Angeles for the Center for Endocrinology, Diabetes and Metabolism. The donations have supported and augmented resources that help type 1 and type 2 diabetes patients with diet, fitness and weight management, as well as with the psychological strain associated with their condition.

As familiar as Leonard is with a good fight, he is overly familiar with diabetes, an illness he saw strike his father, who passed away last May, along with several friends and children of friends.

“One of my friends was a picture of health,” he says. “He trained every day, worked out. He ate right. When he told me that he had diabetes, it scared me. It hit home that I should try to do more, do something. I felt with my fame and my contacts, I should start a foundation.”

He did so a decade ago, partnering with his wife, Bernadette, with one intention: “Diabetes was always the target.” Residents of Pacific Palisades, the Leonards began their relationship with Children’s Hospital Los Angeles in December 2011, when they visited the hospital and took a tour of the Endocrinology Clinic. If, as Ray says, diabetes was the opponent, children were his collaborators.

“That has been my focus from day one,” he says, “trying to make sure kids have a great future. Not just my own kids, but other kids.

“The first time I met with the kids and their families, it was nerve-wracking because the kids looked at me like, ‘Who is this guy?’ I talked about knocking out diabetes. I was using boxing as a metaphor. They caught on. I told them, ‘Don’t ever quit, continue to dream your dreams, and don’t eat too many sweets.’”

Diabetes was always the target. That has been my focus from day one, trying to make sure kids have a great future. Not just my own kids, but other kids.

He laughs, noting that as a teen he would have dismissed any adult who tried to lead him away from his Snickers habit. “I was trying to break it down for them. And when I saw a smile on their faces, I knew that I was getting through.”

Mitchell Geffner, MD, Chief of the Division of Endocrinology, Diabetes and Metabolism, who escorted Leonard on his first tour of CHLA and has shown him around the hospital several times since, is taken by his graciousness.

“One particular time,” he says, “I remember we were walking in the lobby, going from one part of the hospital to another, and every two seconds somebody stops him and says, ‘It’s Ray Leonard! It’s Sugar Ray Leonard!’ Patients, staff. He took time, I swear, for every one of them. And his wife said to me, ‘He always does that. We can never get to where we’re going.’”

Dr. Geffner has also witnessed Leonard’s interactions with patients. He says that even if the kids don’t know his boxing history, when Sugar Ray breaks out the boxing gloves and does a light workout with them while talking about the importance of exercise and eating right, they listen because, trim and fit as ever, Leonard is a manifest example of healthy living.

He recalls one visit where Leonard gave a high-speed jump-rope demonstration. “I mean, the guy’s 62 years old! He’s going 100 miles an hour and I’m getting tired just watching him.

“He recognizes the crisis that’s out there,” Dr. Geffner says. “He espouses a healthy lifestyle and he knows that’s the trick, so he wants to help. You look at him and you know he’s the real deal. He walks the walk and talks the talk.”

The gifts from the Sugar Ray Leonard Foundation have funded services within the Diabetes and Obesity Program, including Teen Power and Kids N Fitness©, which teach children and families ways to maintain healthy routines. Teen Power, in particular, has been buoyed by the donations.

He espouses a healthy lifestyle and he knows that's the trick, so he wants to help. You look at him and you know he's the real deal. He walks the walk and talks the talk.

Dr. Geffner says Ray and Bernadette donated essential funds to help get the program off the ground. “They provided the seed money, and that led to the ability to sustain the program, gather some data, and then go out and get some additional outside money.”

Leonard recently amplified his involvement at CHLA by joining the hospital’s Foundation Board of Trustees. He’s hoping the position will allow him to have even more influence in the struggle against diabetes and obesity. Whereas he could once rely on his own effort and skills to defeat man-sized opponents, Leonard knows this fight is on a scale and against an adversary that he can’t manage alone.

Yvonne Niami: Why I Give

Q&A With the Parsons Foundation

A Generous Couple Honor Their Nephew 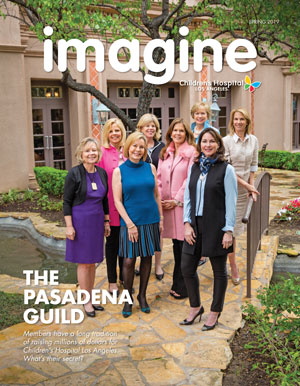