A special Disney program is bringing comfort, joy and a little magic to patients and families at Children’s Hospital Los Angeles.

You might not expect to hear such an excited outburst from a child waiting to go into surgery. But at Children’s Hospital Los Angeles, Child Life Specialist Supervisor Doug Leffin hears those words daily.

All Leffin has to do is open the Disney Team of Heroes app on his smartphone. With a quick tap on the app, he shows a young patient an image that looks exactly like the waiting room, but a second later, Iron Man—or the lovable Baby Groot—suddenly appears on the screen.

“The kids always say, ‘That’s so COOL!’ Every time,” Leffin says, laughing. “The Baby Groot character does this little dance, and the kids will start dancing with him. It’s really fun.”

“We are honored to have a longstanding relationship with The Walt Disney Company. They have used their creative talents and innovative ideas to help bring smiles and joy to our precious patients.”

The app’s augmented reality effects are just one part of the Disney Children’s Hospitals Program—a $100 million commitment from The Walt Disney Company to reimagine the patient experience at pediatric hospitals around the world. Announced in 2018, the program combines Disney’s beloved characters with the company’s celebrated creativity to bring comfort, joy and inspiration to children and families facing serious illness.

For Children’s Hospital Los Angeles—one of the first hospitals in the world to implement Disney’s program—the project is the latest endeavor in a decades-long relationship with The Walt Disney Company. In fact, one of the keys to success in this newest program is that ongoing collaboration.

Building on a legacy

Disney’s commitment to helping children facing serious illness dates back to Walt Disney himself. The legendary company founder would visit children in hospitals, often accompanied by Disney characters and animators.

At CHLA, Disney has built on that strong legacy in myriad ways over the years. The company supported construction of the Marion and John E. Anderson Pavilion with a $5 million gift and the naming of a Child Life playroom; Disney Imagineers designed the hospital’s main lobby; actors such as Kristen Bell of “Frozen” fame have visited families in the hospital; and Disney has produced countless special events for patients, including “May the 4th Be With You,” a “Star Wars”-themed celebration.

The company has also participated in CHLA fundraising events, including Walk and Play L.A. and the Malibu Triathlon. Since 2007, the Disney triathlon team has raised more than $3 million in support of pediatric cancer research at the annual event. Cheryl Kunin Fair, President and General Manager at ABC7 (a Disney affiliate), serves on CHLA’s Board of Directors and Foundation Board of Trustees. In addition, Arnold J. Kleiner, the longtime General Manager of KABC-TV who retired in 2014, was the co-Chair of the CHLA Board of Directors and currently serves on the Foundation Board of Trustees.

“We feel honored to have this program at our hospital. Disney has been such a good partner for us over the years. We just want to say thank you.”

The Disney Children’s Hospitals Program expands on this support with a broad suite of experiences designed to bring a little Disney magic to families during a challenging time—and enhance the hospital experience for patients and their families.

“We’re grateful for the strong relationship we’ve shared with CHLA over the years, and our ongoing collaboration with the dedicated team there has been instrumental in helping to make the Disney Children’s Hospitals Program one we are all very proud of,” says Elissa Margolis, Senior Vice President, Enterprise Social Responsibility, The Walt Disney Company. “With CHLA’s support, we’ve been able to bring our unique ideas to life and provide comfort and inspiration to young patients and families going through a difficult time.”

To create these experiences, Disney consulted a panel of experts, including physicians, caregivers and Child Life specialists. In 2018, CHLA hosted a visit from Disney to show the team around a pediatric hospital environment and help inform the development of the Children’s Hospitals Program. Nancy Lee, MSN, RN, NEA-BC, Senior Vice President and Chief Clinical Officer at CHLA, served on the advisory committee to help shape the program’s strategy.

“Disney really listened to us about what would serve our patients and families best,” Lee says. “It’s been a very collaborative process.”

That expert input helped Disney to focus its program on improving the hospital experience, especially during moments of high anxiety for children and their families.

“Distraction helps children better tolerate pain or anxiety,” Lee explains. “That’s what this program really does. It distracts children from the big unknown—their anxiety around that test, that procedure, that shot.”

A room of possibilities

Lee and others at CHLA, including Chief Innovation Officer Omkar Kulkarni, worked closely with the Disney team for nearly two years to determine what the program would look like at CHLA. Key to that collaboration was the Room of Possibilities.

“Disney has really leveraged its recognizable characters and storytelling abilities to reduce the stress that children and parents have in the hospital.”

The room was basically a movie set with areas designed to look like a hospital waiting room, a patient room, a hallway and a treatment room. It allowed the Disney team to try out program concepts, art and experiences. More than 350 people walked through the space, providing feedback—including health care providers and others from CHLA, which is located only a short drive from Disney’s global headquarters in Burbank. Some suggested brightening mural colors for the benefit of young children, for example. Others pointed out content that could present challenges for children with developmental disabilities. “They would walk us through it and get our ideas on what worked and what didn’t,” Kulkarni says. “It was like a simulation lab.”

Under the overall leadership of Disney Enterprise Social Responsibility, the concepts were designed by the world-renowned Walt Disney Imagineers and the innovative StudioLAB team from The Walt Disney Studios, including technology, storytelling and experience experts. Hundreds of Disney cast members helped bring the program to life.

As part of its reimagining of hospital spaces, Disney created vast, breathtaking murals—drawing children into the vibrant stories of Disney, Pixar, Marvel and Star Wars. The murals are sprinkled with some Disney magic, too. Using the Disney Team of Heroes app, families can point a smartphone at a character on the mural and see that character spring to life on their phone.

More Disney magic can be found in some of CHLA’s outpatient and surgery waiting rooms. In these areas, a Magic Window offers mesmerizing views of wild animals in Africa, life under the sea and even outer space, along with calming scenes from popular movies such as “Zootopia,” “Black Panther,” “Star Wars” and “Finding Dory.” Magic Art offers interactive experiences triggered by optical recognition cards. Specially-created short videos from animated films such as “Frozen,” “Cars” and “The Incredibles,” along with encouraging messages in English and Spanish, greet the children once the interaction is activated.

Other program elements include: care packages for overnight stays; deliveries of toys, DVDs and books; and stories, games and entertainment on the Disney Team of Heroes app. And while Disney has often provided screenings of newly released Disney movies via the Disney Movie Moments program at CHLA, the program also allows families to download the DisneyNOW app on their devices—and access current Disney Channel, Disney Junior and Disney XD content for free while at the hospital.

“Disney has really leveraged its recognizable characters and storytelling abilities to reduce the stress that children and parents have in the hospital,” Kulkarni explains. “It’s not just an app; it’s not just art on a wall. It’s an experience.”

For children, just seeing the images of their favorite characters can bring instant joy. Child Life Specialist Supervisor Leffin often escorts children and their parents down a long corridor on the way to being prepped for an outpatient surgery. The walk could be an anxious journey. But the numerous Disney characters on the walls provide a welcome distraction.

“One 5-year-old boy ran to every single picture the whole way down the hall. ‘Look, Mom—that’s Moana!’ and ‘Look, Mom—that’s Mickey Mouse!’” Leffin recalls. “These kids know these characters. And that allows me and the clinical staff to connect with them and build a rapport.”

Most Child Life specialists also received staff badges featuring their favorite Disney characters, and these badges often serve as a conversation starter with the young patients.

Even a Disney-themed Starlight Gown can make a child’s day. One patient with a developmental disability was distraught by the idea of wearing a standard hospital gown. After Leffin offered him a Spider-Man gown, the boy happily donned it.

Children take the gowns home with them after their visit. Many parents tell Leffin that their child wears the gown to bed at home for months afterward.

“The parents are so grateful,” he says.

Children’s Hospital Los Angeles is grateful too. “We feel honored to have this program at our hospital,” Lee says. “Disney has been such a good partner for us over the years. We just want to say thank you.” 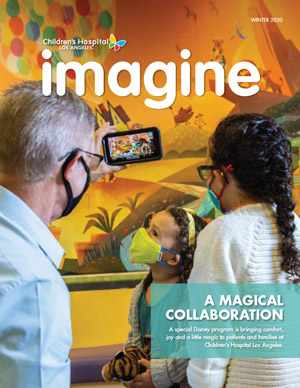