Do This, Not That: How to Care for Your Child’s Cast 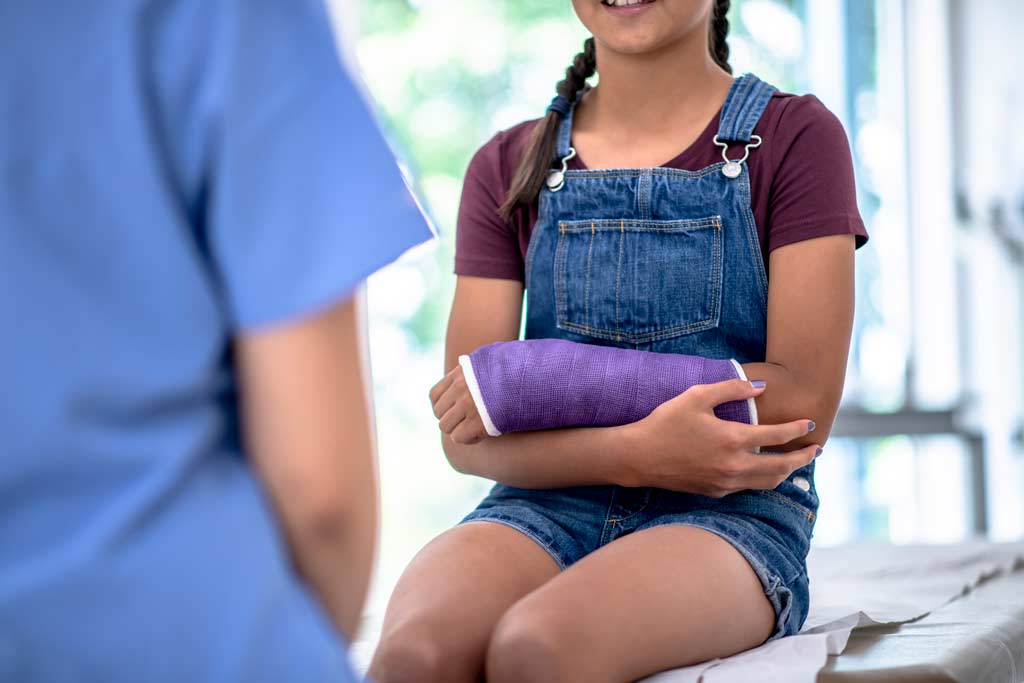 Physician assistant Allison Tarrasch of CHLA’s Fracture Clinic explains how to keep that protective fiberglass shell from getting wet, causing skin eruptions, or driving your kid mad from itching.

Did you hear the one about the patient who slid a butter knife under his cast to try to reach an itch, lost hold of it, and left it there? Or the one about the kid who dropped an arcade token into his cast and couldn’t dig it back out? Game over, indeed.

Or how about the kid who spilled soup down his cast?

“That was a recent one,” Allison Tarrasch, MPAP, PA-C, says.

Tarrasch is part of a group of physician assistants (PAs) who staff the Fracture Clinic inside the Children’s Orthopaedic Center at Children’s Hospital Los Angeles. All can tell stories about the unusual objects that patients have let slip into their casts, usually trying to vanquish an exasperating itch.

What hasn’t Tarrasch seen, either on an X-ray or after a kid’s cast got sawed open?

“I haven’t seen anything alive in there,” she says.

The anecdotes are amusing, but no joke. The damage a knife or other jagged instrument can do is obvious, but any item or substance that falls into a cast or affects its composition becomes a health hazard. Below, Tarrasch explains why, what those hazards are, and the do’s and don’ts on how to avert them. Note, there’s always the fallback solution: Call the clinic.

“If something goes wrong,” Tarrasch says, “as long as they speak up and tell us, things can generally be fixed.”

Blow the itch away: Itching constitutes more than half the complaints Tarrasch receives from cast wearers, and the remedies are few. “There’s not a lot you can do,” she concedes. 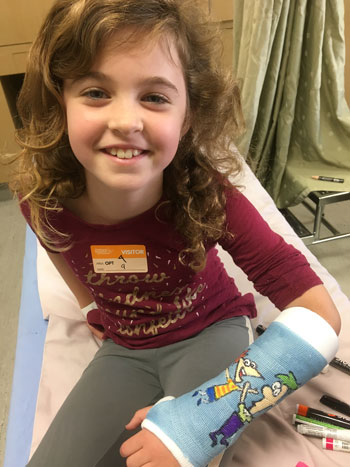 “One tip is you can take a hair dryer and wave air inside the cast and get a little temporary relief. But the hair dryer must be on cool, not hot, or it will heat up the fiberglass in the cast and can burn the child.”

As a last resort, she says try medication: “Something like Benadryl or some over-the-counter anti-histamine.”

Leave the cotton alone: The cotton padding inside the cast can cause itching, and since it’s accessible around the thumb area, kids can start to pull it out.

“That becomes dangerous,” Tarrasch says. “If you take out too much of the padding, the cast can become loose and not hold the fracture in place.”

Or when the cast technician goes to remove the cast with a hot saw and hasn’t been told the padding is missing, the patient is at risk for a burn because the cotton barrier is no longer there.

Swell-evate! Tarrasch says parents often call with concern over swelling in their child’s hand, or foot if a leg cast is involved. The family believes the cast is too tight, but more often, Tarrasch says, it’s the injury causing the inflammation. Elevating the cast will usually help.

But it’s possible that an overly tight cast is partly at fault, contributing to a condition called compartment syndrome, where swelling results from pressure having built up inside a muscle compartment. Rather than more elevation, this requires a trip back to the orthopaedist.

“It takes a little work to figure out if they need to come in,” Tarrasch says, “or should they try elevating it better at home for a while first.”

The PAs run the parent through a series of questions to determine which route to take.

Heel sores are a threat to patients with leg casts, from having all their weight sitting on the heel, which presses against the hard fiberglass of the cast. Tarrasch says when elevating the casted leg, patients should “float” their heels—meaning, rest the leg on the calf area instead.

Get it wet. Keeping the cast dry is critical, as any moisture will ultimately come to rest on the skin, and skin that sits in water for weeks can crack, becoming vulnerable to infection.

“Bathing is a nightmare,” Tarrasch says. “There are all kinds of products—cast covers and bags—but the safest thing is to just say, sponge-bathe only.”

If all your precautions fail and the cast takes on water, report it. “Call the clinic right away so we can take it off and replace it to make sure the skin’s OK, because when the cast gets wet it won’t dry.”

Drop stuff into it. “The cast is so snug, if something gets stuck in it, you are not going to get it back out,” Tarrasch says.

And that creates the risk of a pressure sore, a rupture that results from an item remaining in one place on the skin for weeks. The cast’s tight fit, supported throughout by cotton, keeps everything from moving.

“I’ve seen a coin get stuck in someone’s cast, and it’s not sliding around in there, it’s staying in the same spot,” Tarrasch says. “The skin breaks down in that circular shape and you have a huge, raging ulcer that then has to heal and can be pretty painful.”

Use fancy cleansers. Lotions and powders both present problems. “You don’t want to use lotion and then have this stickiness on the padding,” Tarrasch says, “nor do you want to get powder stuck inside because it can clump up and cause pressure sores.”

Did you know?
An orthopaedic technician at Children’s Hospital Los Angeles customizes casts with drawings of cartoon characters, sports team logos and more! Check out his work.