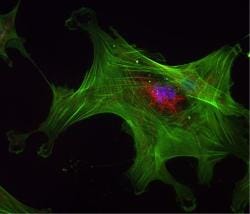 The Cellular Imaging Core provides state-of-the-art equipment in microscopy and digital imaging to investigators at CHLA. Imaging technology in modern biological research is constantly undergoing enormous advances. The acquisition, processing, analysis and storage of digital images are an important part of most biomedical research projects. The primary focus of the Core is technology transfer and provision of facilities for acquisition and analysis of histological and cytological preparations. An important aspect of this technology transfer is to provide training in the use of digital imaging devices, as well as in the application of image analysis procedures for generation of quantitative data.

This facility utilizes CoreConnect, a web-based core management system that supports the centralization of services and equipment scheduling, billing and usage tracking. Use of the new system is required for all core users, core leaders and core staff.

The internal following prices are for Principal Investigators at CHLA and USC; rates are subject to change in the future.

Access to Cellular Imaging Core facilities for researchers at USC and other institutions can be arranged. Interested researchers should contact Esteban Fernandez, PhD, Imaging Scientist at 323-361-2548 or GEFernandez@chla.usc.edu to inquire about availability and rates.

The Cellular Imaging Core houses modern light microscopy and digital image processing equipment to support cell biology research at our facility as well as other institutions.

All microscopes are equipped with high-resolution objective lenses and digital cameras to produce the highest quality images and time-lapse movies.

The STELLARIS is outfitted with:

2CFP FLIM is not possible as the 405 nm laser is not pulsed; CFP/YFP FRET is accomplished in a conventional manner. 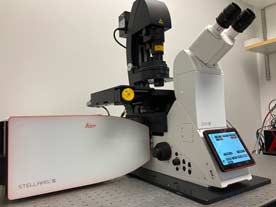 The Zeiss Axio Observer 7 live cell imaging microscope is capable of imaging live specimens using widefield fluorescence, brightfield, phase-contrast, and/or DIC/Nomarski with an sCMOS camera for speed, sensitivity, and a large field of view at high resolution. It is equipped with a robust focus stabilization system and an environmental chamber for stable long-term imaging. A programmable motorized stage allows for automated imaging of multiple positions in parallel, for example of different treatment groups in a multi-well chamber. The objective lenses on this microscope range from 5x to water-immersion 63x. It utilizes LED illumination for extremely fast switching between color channels. An ApoTome structured illumination system is available for optical sectioning to remove out-of-focus haze. The fluorescence excitation LEDs available are:

Lightsheet microscopy is capable of imaging large specimens, such as whole mouse embryos and organs, in 3D rapidly and at high resolution. In this technique, a thin sheet of light optically slices through a cleared specimen. A 3D image is built by moving the sheet through the depth of the specimen while a synchronized camera captures an image of each optical section. Utilization of sCMOS camera technology, with its high sensitivity and fast data transfer rate, allows for short exposure times and much faster acquisition times than point-scanning confocal. Since illumination is orthogonal to the direction of image capture, each plane is illuminated only once and the specimen suffers substantially less photobleaching. Additionally, the UltraMicroscope II is unique in its ability to image specimens cleared with organic solvents for superior clarity over aqueous techniques.  Superb specimen clarity combined with minimal photobleaching and a high numerical aperture long working distance lens allow the UltraMicroscope to generate high-resolution images at increased depth, up to about 6 mm; it can accomodate specimens up to 1.2 x 1.2 x 0.6 cm. It is equipped with a zoom body to easily change between acquiring fast broad-view images and achieving single-cell resolution (down to 0.5 microns/pixel). The fluorescence excitation lasers available are: 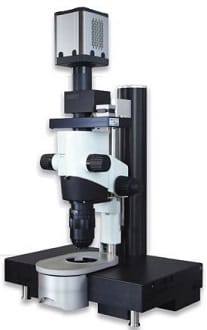 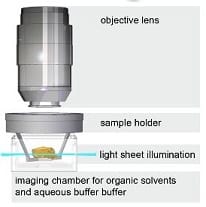 The fluorescence excitation lasers available are:

The fluorescence excitation lasers available are:

These two microscopes are highly versatile instruments, each capable of imaging any type of biological specimen using all manner of traditional light microscopy techniques:

Each microscope has two cameras:

Each microscope has filter sets for fluorescence imaging of:

This microscope has an inverted configuration and long working distance lenses of 5x, 10x, 20x, and 40x for visualizing specimens mounted on slides or in culture dishes.  The camera is fast and sensitive for quick snapshots of fluorescent and brightfield specimens.  The fluorescence filters are for:

How to cite the Core in publications:

The image acquisition and/or analysis work was performed in the Cellular Imaging Core at The Saban Research Institute, Children's Hospital Los Angeles.

Select Cores offer reagents as part of their purchasable services to the CHLA research community. A searchable Core Reagent Inventory was created in support of the CHLA research community BenchResearchHelp initiative that connects researchers with reagents when in need of a small amount of a reagent, such as an antibody, to determine the efficacy in a particular experiment.

CHLA based investigators are welcomed to browse the Cores Reagent Inventory to access the complete product list for pricing and availability. The database will be updated on an annual basis. Contact the Core for more information. 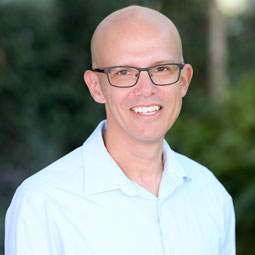 What is a Research Core?