How To Tell The Difference Between Cold and Sinusitis Symptoms

According to the National Center for Health Statistics, sinusitis is the No. 1 chronic illness for all age groups in the United States. Pediatric sinusitis is estimated to complicate approximately 5 to 10 percent of upper respiratory infections in early childhood. Because children average six to eight upper respiratory illnesses per year, it is a very common problem in pediatric clinical practice. With winter upon us, I wanted to blog about sinusitis and give parents the tools to identify the causes, symptoms and treatments. 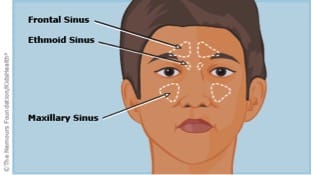 Sinusitis, also called a sinus infection, is an inflammation of the lining of the nose and sinuses. It can be bacterial or viral in nature.

What are the symptoms of sinusitis?

One thing to keep in mind is that, parents often mistake cold-related headaches in young kids for sinus infections, but the sinuses in the forehead don't start developing in children until they are 6 or 7 years old and aren't formed enough to get infected until the early teen years. So, headaches in kids who have colds usually aren't sinus infections.

The symptoms of sinusitis depend greatly on age, and each child may experience the condition differently. The most common signs of sinusitis for younger kids may include cold-like symptoms, including a stuffy or runny nose and slight fever. If your child develops a fever five to seven days after cold symptoms begin, it could signal sinusitis or another infection (like bronchitis, pneumonia or an ear infection), so call your doctor.

In older kids and teens, the most common sinusitis symptoms are a cough that doesn't improve after the first seven days of cold symptoms, fever, worsening congestion, foul breath, dental pain, ear pain or tenderness in the face. Sometimes, teens who have sinusitis also develop upset stomachs, nausea, headaches and pain behind the eyes.

There are many causes of sinusitis; anything that can block the normal flow of secretions out of the sinuses can lead to sinusitis. Some examples of this can be a cold, allergies, abnormal nose structure, enlarged adenoids, secondhand smoke, gastroesophageal reflux disease (GERD), diving and swimming.

Sometimes, a sinus infection happens after an upper respiratory infection (URI). The URI causes inflammation of the nasal passages that can block the opening of the para-nasal sinuses, and result in a sinus infection. Allergies can also lead to sinusitis because of the swelling of the nasal tissue and increased production of mucus. Ronald Ferdman, MD, of the Division of Clinical Immunology and Allergy at Children's Hospital Los Angeles, states the most common cause of poor nasal drainage is routine environmental allergies (allergic rhinitis or “hay fever”).

How is sinusitis diagnosed? 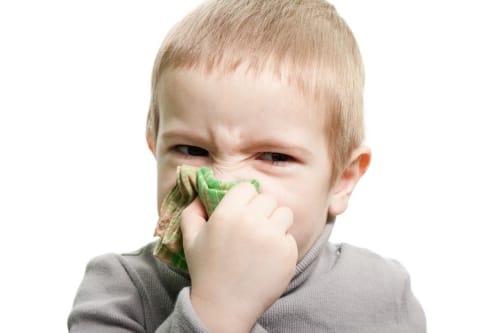 The diagnosis of sinusitis is most accurately done by a CT scan of the sinuses. Plain X-rays are not very good at making the diagnosis. However, the problem with CT scans are that they expose patients to a large amount of radiation and the test can also be very expensive. Parents may have a co-payment based upon their insurance plan. Most of the time, the diagnosis is made based on symptoms and specific testing, such as blood work like a complete blood count or culture. For severe or resistant cases, or especially if surgery is needed, a CT scan may be important to get.

What is the treatment for sinusitis?

Specific treatment for sinusitis will be determined by your child's physician based on:

Doctors may prescribe oral antibiotics to treat cases of sinusitis thought to be caused by bacteria. Some doctors may recommend decongestants and antihistamines to help ease symptoms.

Sinusitis caused by a virus usually goes away without medical treatment. To reduce pain, try:

It is important to note that over-the-counter cold remedies have not been found to be effective in reducing symptoms and may cause unwanted side effects.

You should call the doctor whenever your child has:

Also call the doctor if your child shows any other signs of sinusitis, like pain or stiffness in the cheeks, a fever, or a cold that seems worse than usual.

Simple changes in your lifestyle or home environment can help lower the risk of sinusitis. For example, during the winter, when your heating system makes the air inside your home abnormally dry, consider using a humidifier to keep home humidity at 45 to 50 percent. This will stop dry air from irritating the sinuses and make them less of a target for infection. It's important to clean your humidifier regularly to prevent mold growth.

Although sinusitis itself is not contagious, it is often preceded by a cold, which can spread easily, particularly among family or friends. The most effective way to prevent spreading germs is to teach your family the importance of frequent hand washing, particularly when they're sick. Sinusitis can be a problem for many children. Identification and management of the symptoms are crucial to getting your child back on track! If in doubt, please utilize your child’s pediatrician as a resource.