“That’s yucky, I don’t like it.” Does this phrase sound familiar? My 5 year-old nephew almost predictably recites this line when new foods are presented. I would estimate that nine times out of 10 he has never even tried the food he is saying he is calling yucky. And yes, the majority of the time the offending agent is a vegetable or something that contains “green things.” Is your child also a picky eater? I think that many parents with young children agree that mealtime can be a source of stress and struggle for both parent and child.

To this day I despise eggs. I also hate cilantro. You can’t make me eat either of them, and the thought of eating these foods makes me queasy. On one hand, we know that everyone’s taste buds are a bit different and that certainly some people are more sensitive to different textures and flavors than others; but many children say that they don’t like things that they have never even tried. For this RN Remedies blog post, I have done a bit of research to provide you with suggestions for dealing with your picky eater.

Just because children won’t eat something now doesn’t mean that they will never eat it. Young children, particularly toddlers, sometimes need to be exposed to new foods 10-15 times before they will eat them.

When offering new foods, make sure to incorporate things that you know your child does like. Putting something familiar on the plate will decrease the stress of facing something new and foreign.

A strange new name like cauliflower may sound funny or intimidating to a young child.  What about offering “magic clouds?” Over the weekend we made the mistake of asking my nephew if he wanted to try some corned beef. Of course, he replied, “No, I don’t like yucky corned beef,” even though he has never tried it. My brother-in-law came up with the genius idea of putting the corned beef on his plate anyway and offering it up as “yummy meat.” Down the hatch it went. Shhhhh, don’t tell.

Give children a small amount of new things first before serving other items that you know they will eat. If it is all put on the same big plate, your child is likely to fill up on what’s familiar first and leave behind the new stuff.

Allow children to decide how much or little they would like to eat.

Don’t pressure them to clean their plate or insist that they eat if they are not hungry. This will just create a power struggle between parent and child. It’s best to create a sense of structure around meal times. Offer three regular meals and two healthy snacks throughout the course of the day.  A parents’ job is to provide healthy meals, but it should be up to the child to decide how much and when he or she wants to eat. Children will eat if they are hungry. 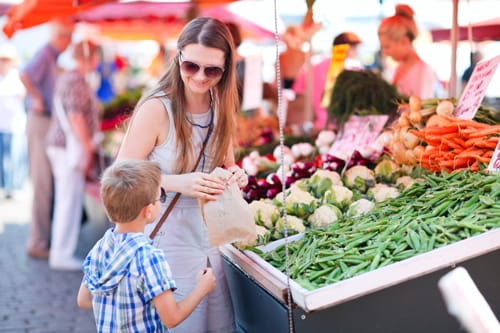 Give your child choices.

If children refuse healthy foods like fruits or vegetables, make it clear that eating these things is not a choice; but it is OK to let them choose which they would like to eat. Make a list of which fruits or vegetables are their favorites. At meal times offer a choice: “Would you like salad or broccoli with your chicken tonight?”

Don’t offer dessert as a reward.

According to an article that I read from the Mayo Clinic, using dessert as a reward sends the message that it is extra special or something that should be desired. In turn, this tells kids that dessert is something more desirable and that other foods aren’t as important.

If your child sees you eating healthy foods, this will set a good example, because your child looks up to you.

Kids are more likely to eat new things when they are invested in the preparation process. Take children with you to the grocery store to help pick out meal choices and put them to work in the kitchen so they can help cook.

Children are more likely to focus on eating when distractions such as TV, iPads, video games or toys aren’t appealing alternatives to eating.

Serve up both new foods and old favorites in colorful bowls or on a new cute plate. Use cookie cutters to make sandwiches more interesting, or put a variety of healthy snacks in separate compartments creating a “bento box.”

For instance, some kids are averse to “mushy foods” like mashed potatoes of items that are either too hot or too cold.  If children resist “mushy,” see if altering the texture changes their opinion of the food. For instance, try crunchy oven-roasted potatoes instead of mashed potatoes. You can also try heating certain foods, which may also make them more appealing.

When your child is old enough to eat a variety of solid foods, serve small portions of the same foods that you and the rest of the family are eating. It is important that kids understand that they need to eat what everyone else in the family is eating. I hope that these tips are helpful. Do you have any tricks of your own for dealing with picky eaters? Pediatricians are also great resources. Don’t hesitate to talk to them if you are concerned about your child’s growth or eating habits.

Health Benefits of a Colorful Plate for Kids and Parents
High Fructose Corn Syrup and Your Child’s Diet
How to Help Your Child Lose Weight Safely
Prebiotics and Probiotics: What’s the Difference and the Benefits?
Relieving Your Child's Constipation
Smart Bites: Kick the Can
Vitamin D: Is Your Child Getting Enough?
What About Cholesterol, Eggs and Kids?
What You Need to Know About GMOs and Your Family’s Diet