Dangers of Energy Drinks for Kids

Energy drinks have been popular for a while now. They are marketed in attractive, brightly colored cans small enough to put in a pocket or purse and easy for small hands to hold, and they taste like soda or sweet fruit juice. 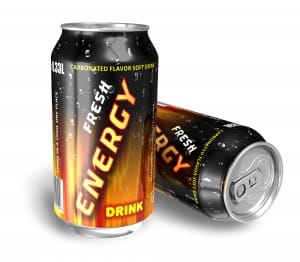 Mostly consumed by teens and young adults, manufacturers are reaping the benefits of huge profits as the public downs a “pick-me-up,” which makes the companies reluctant to respond to cautionary comments from the medical establishment.

They are advertised to improve performance during exercise and are often confused with sports drinks such as Gatorade or Powerade, which contain sugar, electrolytes and some flavoring, and are consumed in larger quantities. Drinking the same amount of energy drinks can have serious effects on the body. The U.S. Food and Drug Administration does not presently regulate the additives in energy drinks because they are not considered a food, but a nutritional addition.

Calls to poison control centers cited approximately 40 percent involved children who have consumed energy drinks found in the home are under the age of 6.

Parents who consume energy drinks have to remember to place them in areas not accessible to their children, and have a conversation with children if they are consuming energy drinks in front of them.

Most of us use some sort of pick-me-up at various times in the day in the form of coffee, tea or a carbonated beverage. Coming from Britain, I love my cups of tea, but the caffeine content is tiny compared to energy drinks. I feel strongly that these beverage companies are irresponsibly marketing a product that is unregulated in the amounts of safe caffeine and sugar for children and adolescents.

The American Association of Pediatrics recently stated that during routine health check ups, the subject of energy and sports drinks should be talked about, as the AAP recommends that caffeine should not be part of a child’s diet.

I asked Linda Heller, MS, RD, manager of Clinical Nutrition and Lactation at CHLA, for her views on the risks and some alternatives for children attracted to these energy drinks. 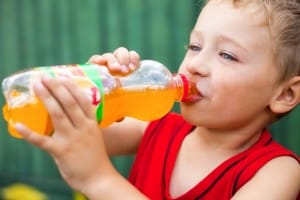 “The beverage industry is enormous and very attractive to all ages—especially children,” says Heller. “However, the best advice may be the simplest: reach for cool, clear water to hydrate yourself and your child, offer milk or a milk substitute several times a day for adequate calcium and additional Vitamin D, limit 100 percent fruit juice to 4 to 6 ounces per day and avoid sugar-containing, caffeine-rich beverages for your child. Children can be very sensitive to caffeine since their body weight is much lower. Further, as a parent or caregiver, your example is powerful. Consider these recommendations for the entire family to avoid conflicting messages and inadvertent consumption of these beverages.”

Teens and young adults also have a habit of experimenting, which is why mixing alcohol and energy drinks has been popular among these age groups. Alcohol is easy to find and consume despite the legal age for drinking of 21. A desire for teens and young adults to stay on top of the lows of drinking alcohol has resulted in dangerous cocktails. Mixing alcohol and energy drinks has been concerning enough for universities to make available articles describing the risks of various cocktails.

Courtesy of the Centers for Disease Control and Prevention

As a parent you need to:

Our children are influenced in all sorts of ways beyond our control, but if you talk openly about risks (in this case of energy drinks and alcohol), you hope and trust they will listen to that small voice in their head (yours) before they make choices.

Avoid a Hit-and-Run: Pedestrian Safety Tips for You and Your Family
Barbecuing with Kids. Safety tips.
Bicycle Helmets: Getting the Right Fit
Bike Helmets: Finding the Right Fit
Bounce Houses: Risk of Injury for Kids
Car Seat Recycling and Safety Prevents Injury and Saves Lives
Children's Hospital Los Angeles Pharmacists Educate the Community on Safe Medicine Disposal
Fireworks Safety: Tips for Parents
First Aid 101 for Parents
From Water to Fireworks: Here’s How to Keep Your Child Safe During the Summer
Grass Is Always Greener on the Other Side, but How Safe Is It?
Halloween Safety Tips by Children's Hospital Los Angeles
Halloween Tips for Kids with Autism Spectrum Disorders
Hazards of Leaving a Child in a Hot Car
Heat-related Illnesses: Know the Signs and How to Keep Your Child Safe
Hiking Safety for Kids: Expert Tips
Holiday Decorating: The Balance between Safety and Fun
Hot Days, Cool Water: Summer Safety Tips
How to Avoid Trouble in Toyland
Introducing the Safety Corner in the Family Pantry
Is Your Purse Hazard-Free?
It's Baby Safety Month: Should you use rear-face car seats?
Keep Your Child Safe from Household Cleaners and Chemicals
Kohl’s Plush Animals and Books Help Children’s Hospital Los Angeles
Laser Pointers and Eye Safety
Laundry Pod Poison Danger
Lead in Your Child's Candy
Look For Lead In Your Home
Preparing Your Family for a Disaster
Prevent a Head Injury...Move the Furniture
Prevent Dog Bite Injuries: Tips to Consider
Prevent Drowning and Falls: Childproofing Tips
Preventing Drowning Accidents: Christina's Story
Summer Safety: Personal Watercrafts
Take the Fright Out of Pumpkin Carving
Water Safety: Hot Tubs, Ocean Swimming and Dry Drowning