I am lucky enough to have been raised Spanish-English bilingual in Los Angeles, a city in which greater than 50 percent of the population speaks a language other than English. Current estimates indicate that the number of people whose first language is not English will continue to grow. As a speech-language pathologist living and working in Los Angeles, I am often presented with questions regarding language development of bilingual children and whether bilingualism results in overall language impairment. 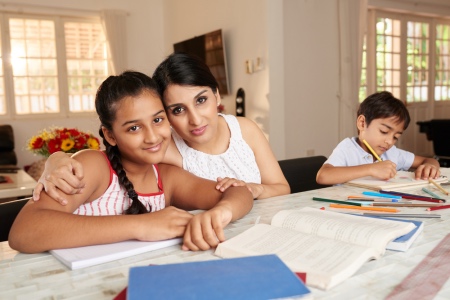 It’s important to understand that bilingual language acquisition can occur in two ways: through simultaneous acquisition or sequential acquisition.

Simultaneous acquisition occurs when a child is exposed to both languages from an early age (typically before 3 years of age). Children that develop two languages simultaneously learn and implement the rules of each language, including how to formulate sentences. For instance, in English an adjective comes before the noun it modifies (e.g., “the black cat”), while in Spanish the adjective follows the noun (e.g., “el gato negro”).

Sequential bilingualism typically follows the following pattern after exposure to the second language:

Myth: Teaching your child two languages will cause a language delay or disorder.​
Fact: Children that participate in simultaneous acquisition of two languages may begin speaking later than monolingual (single-language) children, but continue to begin to speak within normal limits. Monolingual and bilingual children have been found to be comparable in measures of total vocabulary, though bilingual children may demonstrate reduced vocabulary in each individual language.

Myth: If your child uses both languages in one sentence, it means the child is confused and doesn’t understand he or she is learning two different languages.​
Fact: When a child uses two languages within an utterance, it is known as “code-switching.” As noted above, code-switching is a normal part of bilingualism.

How to support your bilingual child

If you have a school-age child, speak with your child’s teacher regarding performance and recommendations for speech therapy.

In It for the Long Haul
COVID-19: Information for Patients, Parents and Visitors
Non-Alcoholic Fatty Liver Disease: What Physicians Need to Know
Studying Spread of COVID-19 Within Families