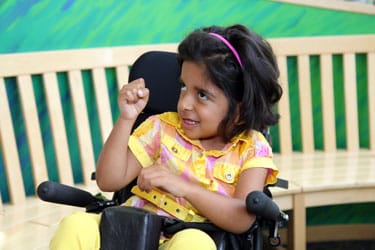 It’s not uncommon to find five-year-old Natalia Gomez dancing to music. She loves to move her hands and kick her feet, as evidenced by her love for kicking off her shoes at a moment’s notice.

Natalia appeared healthy when she was born. But a startling health scare at five months old brought her and her parents, Joe and Angelica, to Children’s Hospital Los Angeles.

“I was at work and Angelica called me and said that the baby had gotten a little quiet and wasn’t responding … wasn’t really moving around a lot. So, I called our pediatrician and he said, ‘Why don’t you bring her in?’ On my way home, Angelica called me and was more panicked, saying that the baby’s left side, her face, her hands and her feet were all starting to twitch in unison,” recalls Joe.

Natalia was being weighed at the pediatrician’s office when she had a grand mal seizure.

“The seizure was very, very severe. The pediatricians in Santa Clarita had been trained at Children’s Hospital. One of them had spent her residency here and the other had completed his internship here. At their recommendation, we decided to bring her here for care,” says Joe.

After undergoing a MRI scan and a CT scan, Natalia was diagnosed with epilepsy, several seizure disorders and cerebral palsy by neurologist, Wendy Mitchell, MD, and her team.

Dr. Mitchell regularly treats children with complex neurological conditions like Natalia. Whereas many medical experts would have presented the Gomez family with only discouraging news following the diagnoses, Dr. Mitchell encouraged Joe and Angelica to begin providing her with therapeutic services as early as possible.

“When people first realize that the baby they thought was perfect has a major disabling condition, it is like falling down a rabbit hole. They are suddenly taken to a world of doctors, tests, therapies, agencies, special schools, regional centers and exotic medications.

Some parents have a hard time accepting their “new world”, but others really take it on. They not only become advocates for their own child’s care, but they become politically active in their communities to advocate for children with disabilities, particularly for services for all children. That’s what the Gomez’s have done. They have done an incredible job as parents to Natalia, and have become a force in the community advocating for special needs kids,” says Dr. Mitchell.

The Gomez family immediately began therapy with Natalia based on Dr. Mitchell’s advice.

Joe says, “Natalia’s doing a lot better than they ever imagined and we believe her life span has been extended because of the care she’s received. She’s very strong. A fighter. When she’s having a seizure, she fights to get out of the seizures and wants to go right back to what she was doing. She’s in preschool now and her teachers say she’s very intelligent. She uses close to 100 words, and according to many experts, she wasn’t supposed to be able to talk. She also knows sign language. She has a very determined spirit.”

When asked about her experience at Children’s Hospital, mom, Angelica, says, “I wouldn’t change it for anything. Dr. Mitchell has been an amazing advocate for our daughter. I don’t know if any other doctor would go that extra mile like she does.”

Because of the Gomez’s commitment to ensuring the best care for Natalia and children like her, their family participated in research conducted by the Division of Neurology.

“Natalia has taken multiple anti-epileptic medications. She participated in a trial of an investigational new drug for her seizure type (infantile spasms). When the multicenter study closed, we obtained a special permit from the Food and Drug Administration to continue the medication for Natalia. Eventually, she was the only child in the world getting the medication,” says Dr. Mitchell.

A Full Life for Natalia 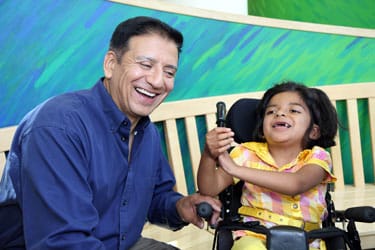 In Dr. Mitchell’s view, Natalia is doing exactly what every child should do, living a happy life and interacting with her parents to the best of her ability.

“Natalia is a very sweet, charming, friendly, happy and interactive child. She is a special needs child that needs special care, but she is a loving child who gives joy to her parents and everyone around her.”

Natalia shows no signs of slowing down. She continues to kick off her shoes and to remain a free spirit. So, we recommend ducking if you’re ever in the path of her fashionable, flying shoes.