When the Engineer Met the Virtuoso 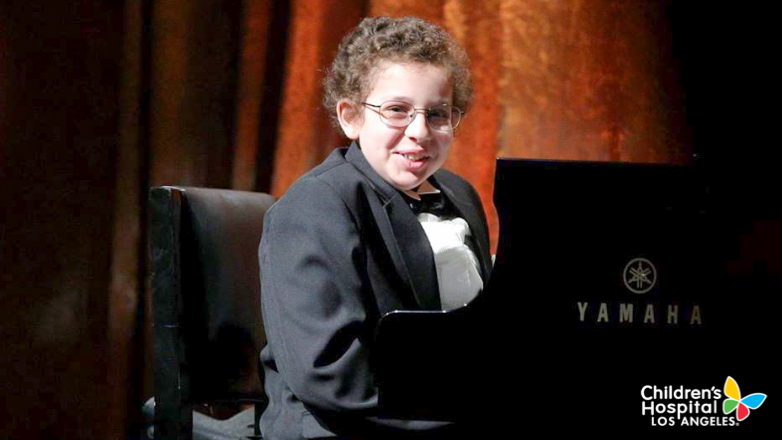 The effects of childhood cancer seemed destined to thwart Alberto’s brilliance at the piano, until he was introduced to a university engineering professor who had an idea.

Of the two ways to get on Alberto’s good side, the more obvious one is to stand to his right, because that’s his good side, the one that faces the audience. On the opposite side, not visible when he’s at the piano, is a thin white pipe extending from his mouth that is part of a contraption that allows him to operate the instrument’s rightmost pedal. That’s the essential one, he says. The other two he can manage without. A perilous bout with cancer cost him his lower-body function, so he can’t move the pedals with his feet. The second way to get on his good side is to not discuss the cancer. The disease is long gone and may it forever stay that way.

“Alberto says, ‘The past is the past. Why do we need to talk again?’” His mother, Bea, says. “He doesn’t want to remember too much.”

Plus, seen from today, that whole piece has been downgraded to a prologue. The nucleus of his story is the piano. He says he’ll allow a recap of the cancer—“it’s not a bad word.” Just be quick about it.

It started with a limp

He was 3½ years old, it was 2005, his foot hurt and he was limping. His mother guessed that his shoes were too tight, but a new pair didn’t help any. An MRI of the foot taken at the local West L.A. hospital showed nothing, which came to be a minus because in two weeks’ time, as his condition deteriorated and he became immobilized from the neck down, doctors were led off course by the assumption that a proper MRI had been done. 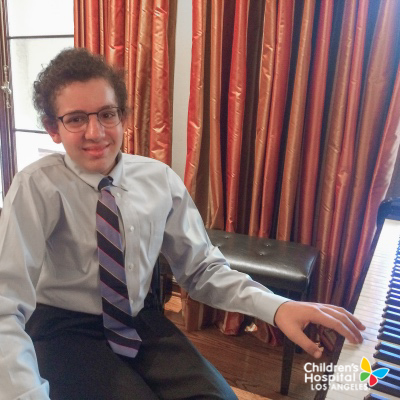 Diagnoses of Guillain Barré syndrome and osteomyelitis, a bone infection, didn’t pan out, and only then was it discovered that a whole-body scan had not been performed. New imaging was taken and found Alberto’s body saturated with medulloblastoma, a central nervous system cancer that had reached his spine.

Bea was a wreck and shut down. “I closed my ears,” she says. “I said, ‘I don’t want to know anything. I don’t want to listen to anybody. I want just to be with Alberto.’”

So her sister, a pediatrician, took over and called pediatric hospitals all over the country, sending Alberto’s MRI ahead. All said they couldn’t do anything, until she contacted Children’s Hospital Los Angeles, which started Alberto on an experimental cancer regimen called Head Start II. The protocol combined several rounds of high-dose chemotherapy with autologous bone marrow rescue, a procedure that collects the patient’s stem cells prior to the chemo to spare them from damage, and then afterward returns them to the bloodstream to regenerate the bone marrow. The treatment eradicated most of Alberto’s cancer, and CHLA referred him for proton radiation to subdue the rest of it.

In short, Bea says, “We moved Alberto to Children’s Hospital and we started to breathe.”

The full telling of the story, of course, is far more harrowing. There was the evening Alberto had a fever that exceeded the range of the thermometer and Bea was told he wouldn’t last the night. And there remains the toll that the disease and the treatment took on his body. Hormonal deficiencies and severe scoliosis keep him coming regularly to CHLA. Though his upper-body function returned, the lower body was left disabled. But there was also the neurosurgeon who told Bea that Alberto had a 1 percent chance of surviving.

The Pedal to the Mettle

“Which is your dream?”

Sometimes imperfect English is the most graceful—and all the time if it’s spoken by an Italian. Bea, who moved with her husband, Giancarlo, from Rome in 1998, is recounting the question the Make-A-Wish people posed to Alberto when they visited him at CHLA.

“I don’t know how it came out,” she continues, “but he said, ‘I want a piano.’ We were shocked. A piano? Why a piano? He loved music, but I didn’t think he had this strange desire. In that moment, he was very weak. He couldn’t even move the fingers. He couldn’t touch the keys. So I said, ‘Let’s think of the piano some other time because I don’t think it’s a good idea. But Alberto was very stubborn: ‘No, I want a piano.’”

So the piano arrived and was set down in his bedroom because the living room was being renovated, and it turned out that his hands were not too weak to play it; instead, they were revived by it. Piano playing became a joyful form of occupational therapy, and soon the exercising of his hands and fingers helped Alberto recover command of his upper body.

Once his fingers regained their full strength, Bea and her husband presumed Alberto would move on to other things. “We said, ‘Alberto, do you want to stop, because you’re fine?’” Bea says. “He said, ‘No way! I want to continue.’”

Drawn to classical music, he began learning in earnest, and his advancing skill demanded cultivating. Bea enrolled him in the Colburn School, a performing arts program in downtown L.A., and he won multiple competitions.

But his progress hit a barrier. Without function in his legs, he wasn’t able to work any of the piano’s pedals. His range was limited to Baroque composers—Bach, primarily—whose arrangements require only the use of the keys. For Alberto to gain access to all of classical music he had to find a way to maneuver the pedals.

His family was put in contact with an engineer in Germany who was working on an assistive tool for a pianist who had suffered an accident. They flew to Heidelberg to meet him, and he built a device for Alberto that appeared to be just the thing. It used a magnet that clamped onto and mechanically raised and lowered the right pedal on the piano, considered the crucial one because it draws out the sound. Alberto controlled the magnet with a sensor that was fitted in a mouthpiece he would wear. To boil it down, he would touch his tongue to the roof of his mouth in coordination with the need to move the pedal. Take the age-old challenge of rubbing your stomach while patting your head and multiply it by infinity.

“It was definitely weird at first,” Alberto says, “but I got used to it.” He showed off the device in a performance at a local hospital in Heidelberg, but when the family returned to L.A., its shortcomings became apparent. Reliant on the hefty magnet, the apparatus was too big and cumbersome, and not easily moved into place. It took Bea as much as 30 minutes to connect it to the piano, which discontented anyone waiting on Alberto to play, whether an audience of many at a performance, or of one—his stern piano teacher.

Moreover, the German engineer devised a Bluetooth connection between the mouthpiece and the piano pedal. It was ingenious but impractical, as it created interference with other wireless devices in the building. Audience members were asked to power off their cell phones, which added to Alberto’s unease.

Obstructed by his disability, he was losing enthusiasm for the piano when good fortune weighed in. After Alberto’s performance at a fundraiser for CoachArt, an organization that provides arts and athletics lessons for kids with chronic illnesses, Bea was approached by one of the gala’s attendees, who was taken by Alberto’s ability. It was Stephen Yen, DMD, from CHLA’s Division of Dentistry and Orthodontics. The two began talking and Bea explained to Dr. Yen the issue with the pedal, how Alberto’s potential was impeded, and the promise but eventual inadequacy of the German device. Dr. Yen told Bea he knew someone he thought could help.

He put her in touch with Sam Landsberger, a professor of mechanical engineering at California State University, Los Angeles. Landsberger directs the school’s MadScientists Laboratory for Rehabilitation and Sustainable Engineering, and he had worked often with Dr. Yen to develop supports for children with congenital mouth or jaw deficits. When Bea lugged the appliance into his lab, Landsberger saw the problem.

“It lives up to its name of German engineering,” he says. “It’s built like a battleship.” 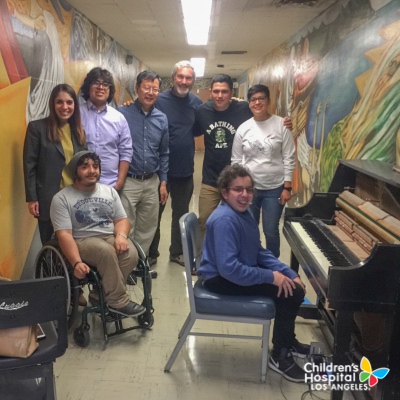 Landsberger saw that he had to achieve two upgrades: He had to make a device that was smaller and simpler, and also less intrusive—particularly on Bea, a petite woman who was tasked with toting the machinery to and from Alberto’s lessons, and on and off the stage.

He kept the mouthpiece/tongue-sensor pairing, but re-engineered the application of it. He eliminated the Bluetooth component and fashioned a wired connection to launch the action that moves the pedal. When Alberto connects with the sensor Landsberger embedded in the new mouthpiece Dr. Yen created, a signal travels through the wire to a small rotary motor, which Landsberger built to replace the original device’s large, burdensome magnet. The motor rotates, pushing the piano pedal down, and then releasing it.

It’s a less techie but more suitable design, and Bea can set it up in under a minute.

The unveiling of the new system occurred last spring, in a narrow hallway outside the Cal State L.A. gymnasium. Landsberger’s students, who helped with the engineering, wheeled out a piano from an adjacent dance class and Alberto sat down to play. When the device worked as intended, the jubilation flowed.

“It was kind of like a hole in one,” Landsberger says. “It was like, wow, it worked! It’s always such a beautiful thing for me and for my students to see something we’ve done bring a new degree of independence to somebody.” “It was beautiful,” Bea says. “We saw for the first time some possibility.”

It’s the reason he says he loves Bach, translated to its English counterpart: There is no accounting for taste. Asked for a bit more, he turns serious.

“Bach’s music is written in a way that it’s like hearing a conversation,” he says. “A lot of different voices.”

He’s hard at work learning to get beyond Bach now. Use of the pedal has led him to composers from whom he had been excluded. “I played the piano for so many years,” he says, “but a part of the piano I never really knew was there.”

He gives a quick Do-Re-Mi sample without pedal use, and then with it, and the second effort causes the notes to resound and linger. “Everything extends. You hear it?”

About to turn 17 in February, he has a great amount of catching up to do, as he learns an entire new catalogue of pieces while still getting accustomed to a new way of playing. Another objective is to get the piano out of his bedroom once the living room can accommodate it. “I’ve been in this room pretty much my whole life,” he says.

Among his Spider-Man poster and competition trophies hangs a picture of his musical hero, Canadian pianist Glenn Gould, who Alberto explains was known for his unusual way of performing Bach. “Some people think he sounds too mechanical, but I think his unique interpretation is what makes him special.

“Everyone can play however they want,” he says. “It’s the sound that makes the difference.”

He inserts his mouthpiece to offer another example and plays a burst of Beethoven’s Sonata in F minor that goes booming across the bedroom, whose confines, like his Baroque songbook, he is beginning to outgrow.

You can help kids just like Alberto receive the very best care by making a donation to Children's Hospital Los Angeles. Visit CHLA.org/Donate.