A Hip Disorder Is No Match for This Teen Marathoner 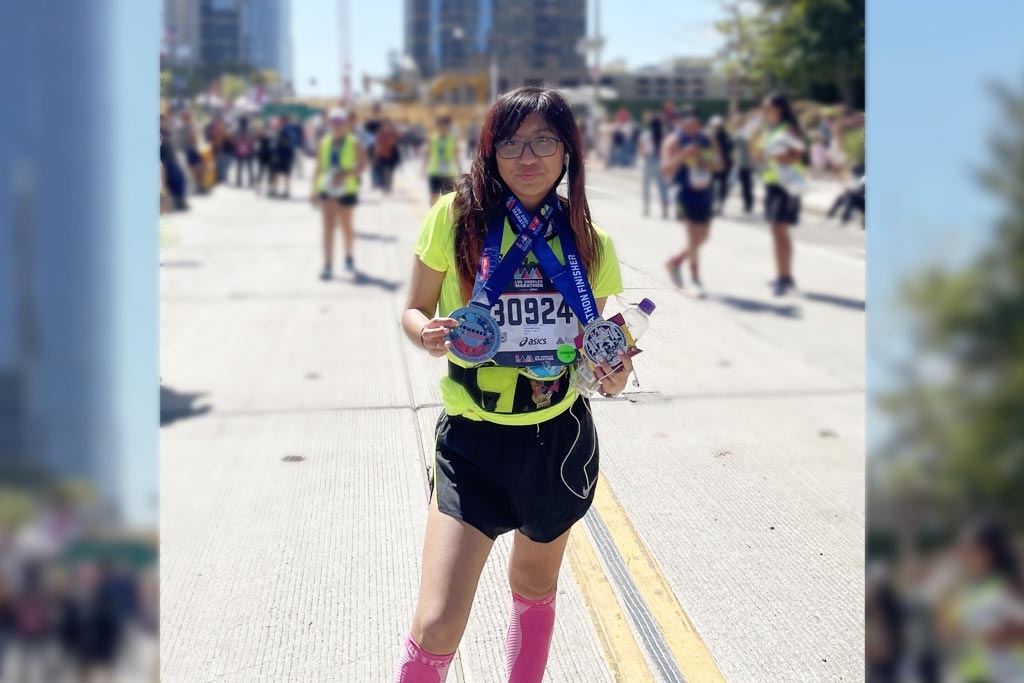 Diagnosed with hip dysplasia at birth, Kimberly underwent surgery and months of physical therapy that allowed her to do something she once thought was unthinkable: run 26.2 miles.

In March 2018, 13-year-old Kimberly was volunteering at the L.A. Marathon when “a crazy idea” popped into her head.

“I was giving out water at mile 10, watching all these runners passing by. They were so fearless and confident. I honestly don’t know where this came from but I suddenly thought to myself, ‘Hey, this looks kind of easy. Why not run in the race next year?’” she says with a laugh.

It’s one thing to think about doing a marathon. It’s another to spend months training and to actually complete the 26.2-mile course. Add a hip disorder to the mix, and some would say that’s just downright impossible. But Kimberly has never backed away from a challenge.

“I don’t like to let obstacles stop me,” she says. “I knew I had this hip disorder, and I knew I had to accept it, but I also didn’t want it to get in the way of doing what I wanted.” 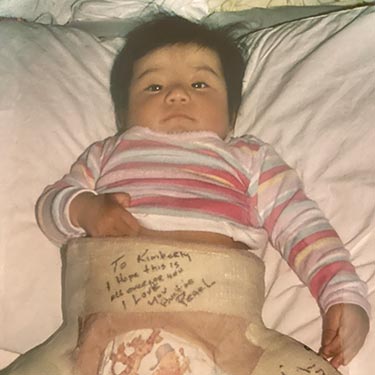 “I’m just so glad and grateful that my parents chose this hospital,” says Kimberly, pictured here in a body cast after undergoing surgery when she was 6 months old.

When Kimberly was born, she was diagnosed with developmental dislocation of the hip. The condition affects about 1 in every 1,000 babies and occurs when the ball and socket joint of the hip doesn’t form properly. Without appropriate treatment, the condition can cause the legs to look different in length, limit the range of motion on one side of the hip or lead to walking problems.

Kimberly’s parents, Sandra and Florencio, brought their daughter to Children’s Hospital Los Angeles. Some patients’ hip dysplasia can be corrected with a brace, but Kimberly’s case was severe and required surgery. At 6 months old, she underwent a procedure called a closed reduction that involves repositioning the thighbone into the correct position.

Since then, Kimberly has been monitored by her orthopedic doctors and has had annual check-ups at CHLA.

“One of the things that makes our program unique is that we take care of kids from birth until they’re done growing,” says Rachel Goldstein, MD, MPH, Director of the Hip Preservation Program in the Orthopedic Center at CHLA. “We want to make sure their hips continue to develop in a normal way. If the hip needs to be replaced, we have specialists who know how to perform these types of procedures on young patients and that allows us to follow patients throughout the course of their life.”

For more than a decade after her surgery, Kimberly didn’t have any issues with her hip. She played with friends in the neighborhood and ran around during PE class at school. But just as she hit puberty, she started to notice some pain in her hip. It began as sporadic bouts throughout the day, but worsened to the point where she couldn’t walk without limping.

It turned out that Kimberly had a proximal femoral growth disturbance, a common complication after closed reduction surgery. Because of the abnormal shape of the hip, her right leg was a bit longer and was therefore bearing more weight than the other half of her body. Dr. Goldstein examined Kimberly and determined physical therapy would be the safest, most effective treatment.

“I dreaded it in the beginning, mainly because I didn’t want to miss school but also because I didn’t want to do any of the exercises,” recalls Kimberly. “But it was such a great atmosphere at the hospital and so welcoming, and I got to know my physical therapist really well. I started to realize how much the exercises were helping me and how it made my muscles stronger.”

Six months of squats, crunches and working with resistance bands made the pain eventually dissipate. 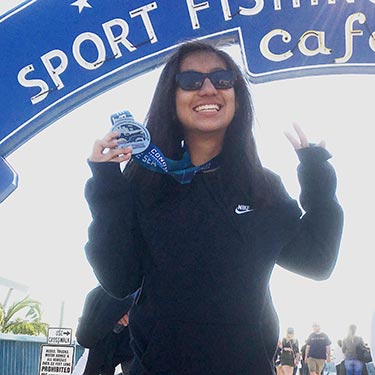 Kimberly celebrates in Santa Monica after finishing the 2019 LA Marathon.

Back at school, Kimberly was listening to announcements over the PA system when she heard one that mentioned a local running club called Students Run LA. She went to a meeting a few days later with her mind set on doing the L.A. Marathon that year. But the first run with the group didn’t quite go as planned.

“It took me 25 minutes to complete two miles, and I felt so slow compared to the other runners. I came home and told my parents, ‘I’m not doing this anymore. I’m done with it,’” she says. “But then I thought about it: I’m not a quitter. I don’t want to give up on this. I’ll stick it out one more day and if I don’t like it, then at least I tried.”

Four years later, Kimberly is now the president of Students Run LA and the captain of her school’s running team.

“I fell in love with running because of how it allows me to let some stress out. When you’re running, you can’t think of all the assignments you need to do or the tests you need to study for. You just focus on your pace,” she says. “It’s my catharsis.”

In 2019, Kimberly ran her first marathon. At mile 20 she “hit the wall,” a phrase runners use when fatigue overwhelms the body and the muscles feel depleted. She started to hear her coach’s voice, encouraging her to keep going no matter what. Then she saw the bright L.A. Marathon banner. Kimberly shuffled through her phone to put on her favorite song—High Hopes by Panic! At the Disco—cranked up the volume on her headphones and dashed toward the finish line where her family was waiting.

“I was in tears by the time I saw my parents,” she says. “The irony is that despite my body being in so much pain at the end of the race, the one part that wasn’t hurting was my hip.”

Kimberly, now 17, has since completed the L.A. Marathon three more times, and has no plans to stop. She’s eyeing the Rome Marathon, which is part of an even bigger goal: to live and work in Italy once she graduates college. In the meantime, she has committed to USC where she plans to major in pharmacology and Italian studies, while minoring in Latin.

Because of her hip’s anatomy, Kimberly will likely need to have a hip replacement at some point. But the hope is that by maintaining her physical therapy regimen at home, she can buy some time and stave off surgery until she’s much older. As Dr. Goldstein explains, “It’s ideal to have that when you’re 60 or 70 so you only need to do it once in your life,” versus having it done as a teen, which guarantees multiple additional surgeries.

Kimberly credits the surgeon who treated her as a baby, her physical therapist and Dr. Goldstein for giving her the chance to lead a healthy, active life.

“If it weren’t for them, I would never have thought about doing a marathon because it wouldn’t have been possible,” she says. “I’m just so glad and grateful that my parents chose this hospital.”