Published on
May 20, 2022
Categories:
Patient Stories 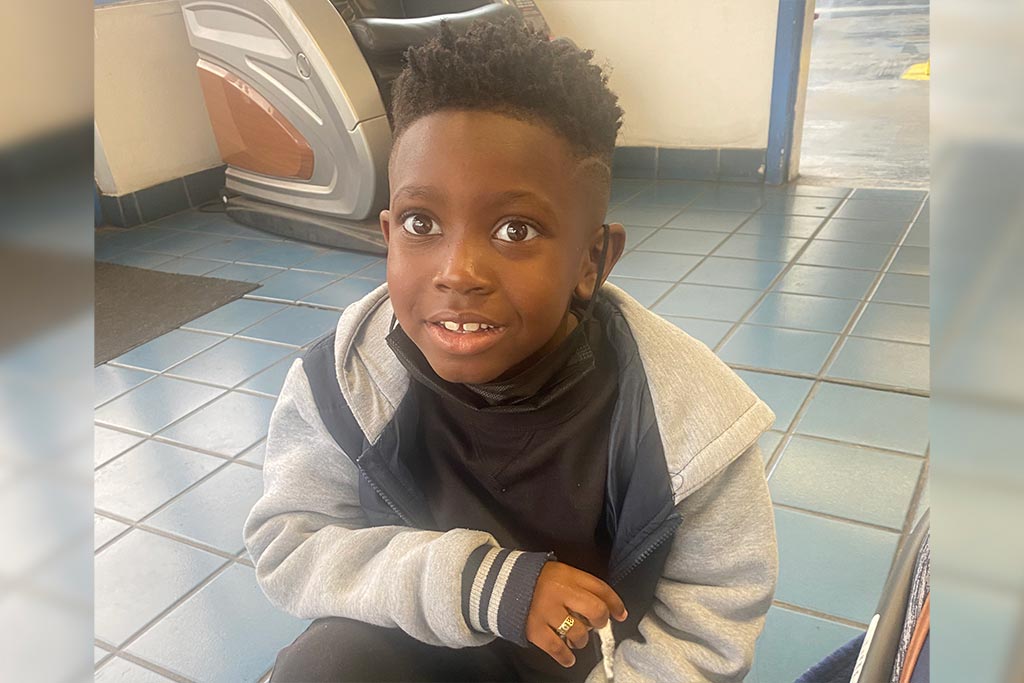 A CHLA patient has a congenital heart defect so rare that the cardiologist who diagnosed the condition had never seen it before in more than two decades of pediatric care.

Perhaps calling Chappral’s son “Lucky” Cix is not the best line, but even if the pun falls flat, the name certainly fits. Had a cardiologist not performed an echocardiogram on him after hearing a heart murmur, Cix (pronounced “six”) would have returned home with a rare heart disorder left undiscovered for a good while longer, putting his life at risk.

That January visit to Joseph Ahdoot, MD, at Children’s Hospital Los Angeles had come at the behest of Cix’s pediatrician, who weeks earlier had heard the murmur herself. To that point, Cix had not shown any symptoms of heart trouble. Yes, he seemed to get short of breath from exertion a little too quickly, but nothing that would cause alarm. He played a lot of basketball, so naturally, his mother figured, he got winded easily. 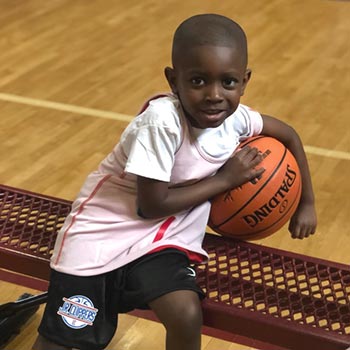 Cix’s shortness of breath didn’t worry his mother. He played a lot of basketball; why wouldn’t he be short of breath?

“I’m just thinking, he’s a boy, he’s playing, he’s running and jumping and doing boy stuff—of course he’s out of breath,” Chappral says. “I didn’t think that anything was wrong.”

Nor should she have, Dr. Ahdoot says. “If we did an echocardiogram on every 7-year-old who had a little shortness of breath when he ran, we’d be doing echos 24 hours a day.”

But not every 7-year-old has a conspicuous heart murmur—an extra sound that Dr. Ahdoot describes as a whoosh that would follow the heartbeat’s regular lub-dub. “The murmur is what stimulated the evaluation,” he says.

“I know plenty of people who have a heart murmur, so I wasn’t too afraid,” Chappral says. But the ultrasound seemed to stretch on too long, and Dr. Ahdoot wasn’t giving anything away. “He got really quiet and he was taking a really long time. And I was like, ‘Is everything OK?’ When he said no, my heart just dropped. That’s when we discovered something was wrong.”

That something the echocardiogram revealed was a heart defect so rare that in 22 years of practicing medicine Dr. Ahdoot had only come across it in medical texts and at conferences. He had never confronted it in a patient.

Dr. Ahdoot diagnosed Cix with ARCAPA, short for anomalous right coronary artery from pulmonary artery, which comes near to describing the disease entirely. If there were ever a time a doctor might do a double take, this was it. 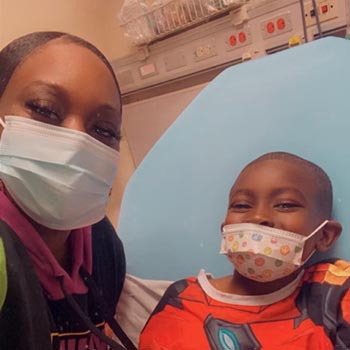 Cix with his mom, Chappral, on the day of his surgery

“It was completely a surprise,” Dr. Ahdoot says. “Anomalous right coronary artery is not something we would’ve expected or looked for. You’re looking for something a lot less concerning and much more benign.”

Because of the faulty circulation caused by ARCAPA, the right side of the heart receives oxygen-deprived blood from the pulmonary artery. The longer this goes on, both sides of the heart get insufficient oxygen, creating the risk of heart failure. Surgery must be done to rewire the blood vessels so the right coronary artery connects to the aorta.

Dr. Ahdoot knew his diagnosis was correct, but because of the gravity of it he reached out to his colleagues for backup.

“I sent out emails to four of our associates saying, ‘The echo’s completed. It’s online. Can you all please take a look at it?’” he says. “‘Am I truly looking at a case of ARCAPA? If you agree, let me know.’ Within the next two or three hours, I had texts and emails from all my colleagues saying, ‘That’s sure what it looks like to me.’”

They all agreed that a second imaging test to confirm the diagnosis was warranted, and a CT scan provided it. “We reassured ourselves that this was truly what we were looking at.”

The diagnosis was high stakes for Dr. Ahdoot, both emotionally and academically.

“It was a dramatic finding,” he says. “As a physician and for the family members, it’s concerning and emotional, and it’s very charged. But as a scientist it’s stimulating because it’s so rare. I think it was the same case with everybody else. My colleagues were like, ‘Wow!’ My phone just blew up right away with messages.”

He had promised to call Chappral after gathering more information, but she was expecting it would take a day or two. “By the time I made it home to Hawthorne, he was already calling me back,” she says.

Earlier in Dr. Ahdoot’s office, Chappral had been devastated and tearful, but the time in the car let her emotions settle and allowed her to ask a clear-eyed question: “Since you guys have never seen this before, how do we know that surgery is the only thing that can be done?"

The answer wasn’t the one she hoped for, but it removed any doubt. “When he called me back and told me that he talked to all these people, I said, ‘OK, well, all of them can’t be wrong.’” 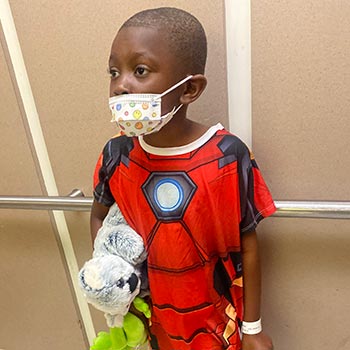 Cix holding birthday gifts given to him by his nurses

Repairing the defect would be in the hands of cardiothoracic surgeon Ram Kumar Subramanyan, MD, PhD. In his nine years at CHLA, Dr. Subramanyan had treated only one previous patient with ARCAPA. “That kid was very young, less than a year old,” he says.

The operation is a delicate procedure that requires the heart to be stopped and put on a heart-lung bypass machine to keep it pumping while the surgeon realigns the arteries. “We basically move the coronary artery from the pulmonary artery back to the aorta, where it belongs,” Dr. Subramanyan says. “On a scale of 1 to 10 for surgery, this is an 11.”

To describe the complexity of the operation, Dr. Ahdoot compares the pulmonary artery and aorta to two trees standing beside each other, with blood vessels, like branches, coming off them.

“Imagine you need to take a branch off one of the trees and bring it over and hook it up to the other tree,” he says. “When you pick up this branch, if you don’t do it right, if it kinks or if it twists, if it gets obstructed, it’s all over.”

He finishes the explanation and adds, “This is not something surgeons do every day.”

Cix’s surgery was set for Feb. 16, a day before his eighth birthday, but Chappral held off on telling him because she knew it would affect him.

“I never used the word surgery,” she says. “I just said, ‘You’re going to have a procedure done to check out your heart, to make sure it’s strong enough for you to play basketball, make sure nothing’s wrong.’” 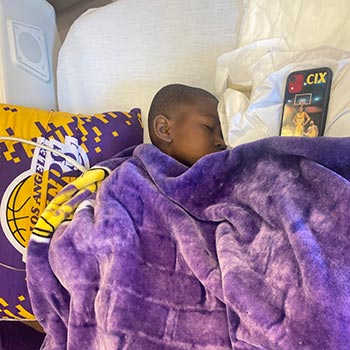 Purple and Gold dreamer: Cix sleeps after his surgery

But the morning after speaking with Cix, Chappral found out that her attempt to soften the delivery hadn’t worked; the seriousness of the procedure had gotten through to him.

“I think he stayed up all night because when I woke up to go to work and get him ready for school, he was already awake. And he’s never awake when I wake up in the morning. That same morning, his teacher texted me. She said, ‘I’m just letting you know Cix slept all day in my class.’

“He loves school. Sleeping in class is something he doesn’t do, so I know it was on his mind. That was the whole reason I didn’t want to tell him early on.”

Chappral was able to manage her emotions until the day of the surgery, when it was time for Cix to be taken into the operating room.

About 3 ½ hours later, Dr. Subramanyan entered the waiting room to give Chappral some good news. “It went great,” he said. “It went just perfect.”

Sedated, Cix slept for hours after his surgery. He woke up right at midnight, formally 8 years old. The hospital staff made sure the milestone got the celebration it deserved: They gave him toys and ordered him a milkshake from the hospital café. A nod to Cix’s love of the Los Angeles Lakers, his nurses wore purple scrubs and sang “Happy Birthday” to him.

Awaiting him at home upon his return two days later was a pile of gifts from family and friends. “I left my key with my neighbor, and my neighbor was bringing in the boxes every day,” Chappral says. “When we got home, all the boxes were laid out on the couch. Literally, he had 17 boxes to open up—17 boxes.”

The origin of the unique name with the unusual spelling

“Yeah, there is a story,” Chappral says about her son’s first name, which is even rarer than his heart condition. It was inspired by the prevalence of the number 6 in the family records.

“In our family, our birthdays fall on the sixth of the month,” Chappral says. “I’m Jan. 6. I have an auntie that’s Oct. 6. My grandpa is Nov. 6. My cousin is July 6. Basically, almost every month of the year, somebody in the family’s birthday falls on the sixth.”

And the spelling of the name? That’s less of a story, Chappral says: “Because my name starts with a C.”