After a Broken Arm, Parker Is Back In the Swing of Things 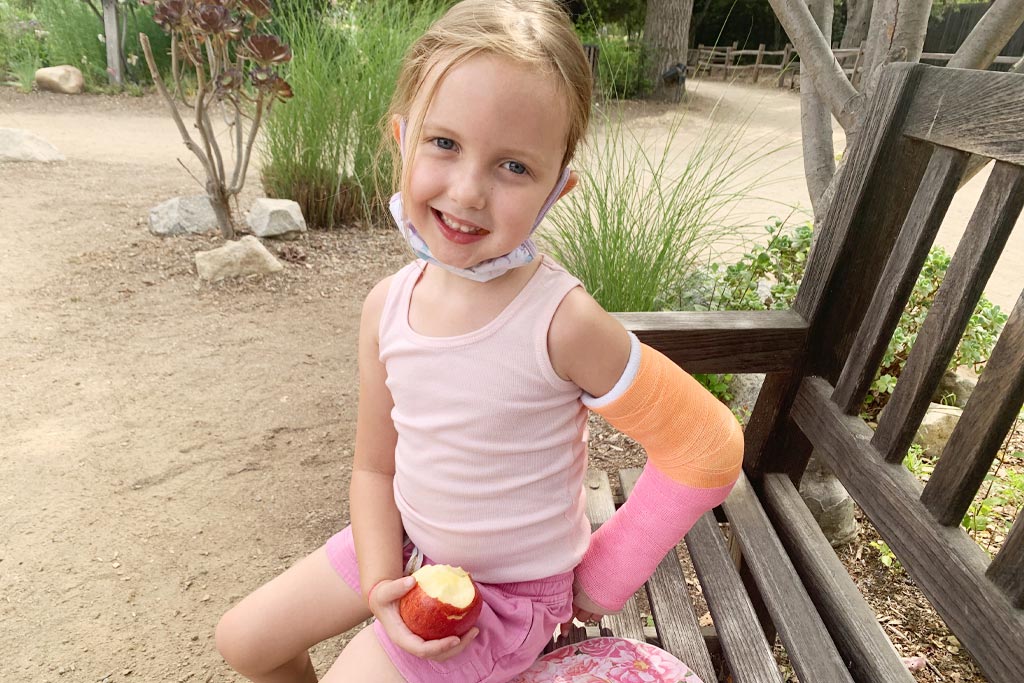 The 5-year-old's family credits a team of fracture experts at Children's Hospital Los Angeles for helping their daughter recover from a playground accident.

It was a fine June day when 5-year-old Parker made her confident way across the monkey bars at her local park when her hands suddenly slipped and—bam!—down she went. Parker landed on her left arm and didn’t get up. 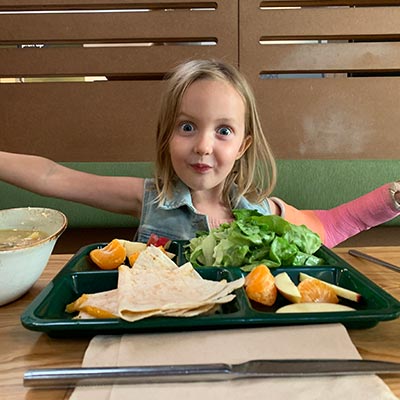 Parker’s parents, Christy and Justin, rushed her to a nearby urgent care facility where a doctor determined that she had broken her upper arm bone (humerus), just above her elbow. Finding out later that this is one of the most common breaks in children Parker’s age was small comfort to her parents. Their child was hurt and needed help.

Parker’s recollection is a bit more straightforward: “I fell. I broke my arm. I cried for about 20 minutes.”

“All children with broken bones—whether they need surgery or not—benefit from seeing a pediatric specialist,” says Robert M. Kay, MD, Medical Director of the Jackie and Gene Autry Orthopedic Center, which has been consistently recognized by U.S. News & World Report as one of the nation’s best pediatric orthopedic programs. “Our entire staff is incredibly experienced in caring for children, and that makes all the difference in the outcome.”

That’s not the only difference. “Children’s Hospital took what was an unexpected event for us and made it so much easier with their knowledge and their procedures,” says Parker’s dad, Justin. “As a parent, you hope you never need Children’s Hospital, but you’re relieved you’re there.”

Justin and Christy especially appreciated that they were “Mom and Dad” to the hospital staff, who made Parker their No. 1 focus and empowered her by asking for her opinions. “They brought the calm,” says Christy.

The pediatric facility has been designed with kids in mind—from the bright primary colors to the fish tanks, cartoon characters and videos—but the child-centric philosophy goes beyond the physical environment.

“We involve the child in what is happening to them and treat them respectfully,” says Dr. Kay.

Parker couldn’t agree more. “The doctors and nurses were really nice,” she reports.

In any given year, 2-3% of children sustain a fracture, and they are the fourth most common injury among children under the age of 6. The most common cause: falls, with the most serious breaks usually resulting from car crashes.

The Fracture Clinic handles care for patients with broken bones who don’t require surgery, which account for about 95% of cases in the Orthopedic Center. Parker was part of the other 5% who need surgery and are treated by the Center’s pediatric orthopedic surgeons.

When surgery is the answer 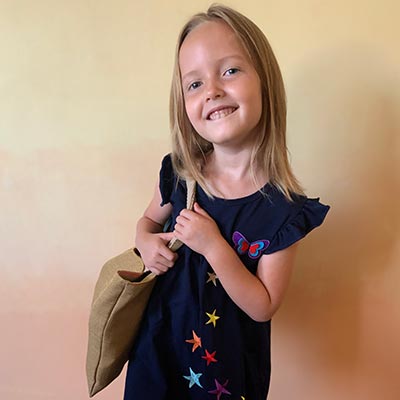 Parker, after her arm had healed

“You train to become a pediatric orthopedic specialist to be able to identify that small percentage of cases where a broken bone needs surgery, and without that intervention the child could lose form and function of the limb,” explains Parker’s surgeon, Nina Lightdale-Miric, MD, Director of the Pediatric Hand and Upper Extremity Surgery Program.

All of that expertise is critical because children’s bodies are still developing, making them particularly vulnerable to  fractures that can occur at or near the growth plates at the ends of bones, which Dr. Lightdale-Miric calls “bone-making factories.”

While a child’s bones are more fragile, they are also more rubbery than an adult’s. They crack but don’t separate. “They’re like brand new green twigs,” says Dr. Lightdale-Miric. “At the end of the tree limb, the twigs bend but don’t snap.”

The danger is, if a fracture is severe or a growth plate doesn’t heal properly, the bone could stop growing or grow at an angle, creating a disability.

“If you are not a kid specialist, you can’t see what a kid specialist can see,” says Dr. Lightdale-Miric. “The more experienced you are, the better you are at getting children back on the playground and onto successful lives.”

An exceptional level of care

Parker went into surgery the morning after her arrival at Children’s Hospital and everything went smoothly. She even got to pick out the colors of her cast—pink, which is her favorite, and orange, her mom’s, with a sprinkling of purple glitter.

At every step, the family felt well cared for. A discharge nurse expedited medication at the hospital pharmacy and gave the family a schedule of follow-up visits over the next eight weeks. Volunteers walked the parents everywhere they had to go throughout the brief stay.

“We weren’t some special case,” says Parker’s dad, Justin. “This is the level of care everyone receives.”

“We can’t thank the staff enough for all the thoughtful ways they cared for Parker and for us,” adds Christy.

For Dr. Lightdale-Miric, the gratitude goes both ways.  “Patients like Parker make me a better doctor,” she says.

Because Parker was seen at an experienced pediatric institution, she and other kids like her enjoy certain advantages. Patients treated by the Fracture Clinic’s experts typically wear their cast for a shorter amount of time and have a better chance of regaining full motor function and a lower risk of needing additional surgery.

Parker is happily back on the playground today, stronger than ever. “It’s okay now,” she says of her arm. “Is this cast going to go on my arm again? No thank you, cast!”