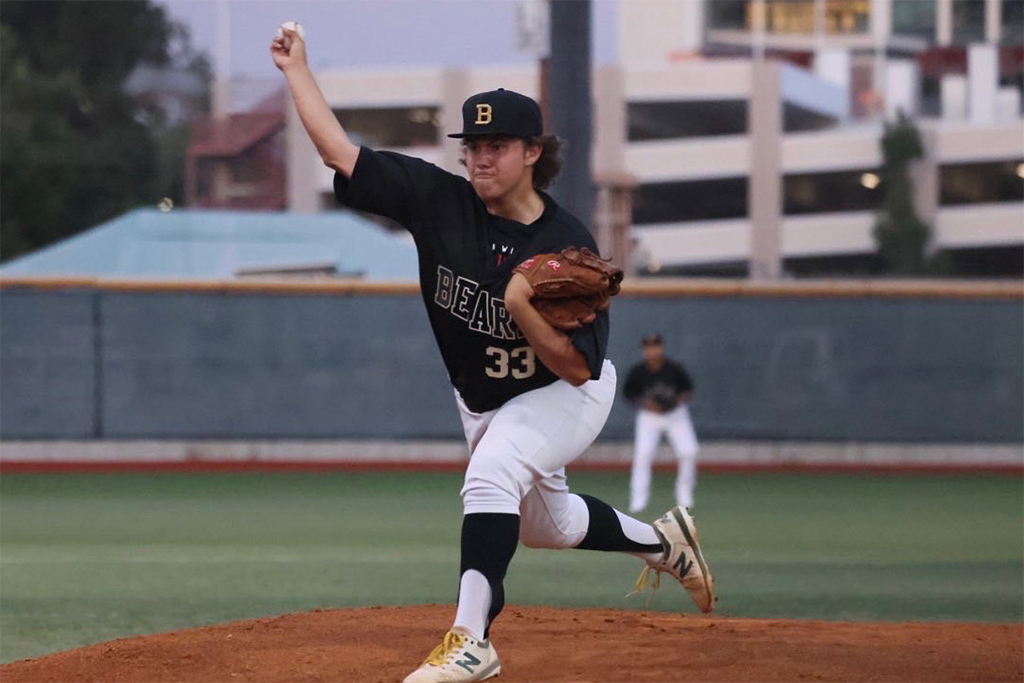 Undeterred by complications caused by a neurological disorder, Jaykob has risen to baseball stardom.

Standing atop the mound in the seventh and final inning, Jaykob took in the situation at hand, like an artist backing off from his work to appraise his progress. He was just a brushstroke short of completing his masterpiece. Metaphors aside, he was one out away from a no-hitter.

Far from nervous, he felt serene. He knew real pressure, and this wasn’t it. This was his second bite at a no-hitter; he got close earlier in the season. “I had one going into the fifth inning and I couldn’t finish it,” he says.

He was on the brink here—one last out.

He pauses on that before adding, “I feel that way about a lot of things.”

‘If he were an adult, he’d already be dead’

Even 17 years afterward, getting the news of her newborn son’s brain hemorrhage replays in Tracy’s mind.

“I was holding Jaykob and we were standing in the corridor of the hospital looking at a screen,” she says. “My husband Dustin is next to me with his arm around us, and the doctor’s words—not the best choice, by any means—he said, ‘This is a stage-3 brain bleed. If he were an adult, he'd already be dead.’ I can still picture it like I was standing right there.”

Shortly after, on Halloween 2005, Jaykob, 2 weeks old, was transferred to Children’s Hospital Los Angeles, where doctors searched for any abnormality that could have caused the bleed, which generally is associated with preemies, but found none. Jaykob was born at full term.

“To this day, 17 years later,” Tracy says, “we have zero answers as to why it happened.”

The cause of the bleed was of less consequence than the effect of it. The bleeding, and the scarring that resulted from it, obstructed the flow of the vital cerebrospinal fluid, causing it to accumulate in the ventricles of Jaykob’s brain, where it is produced—a condition called hydrocephalus. The fluid normally circulates back into the bloodstream, but if it gets jammed up in the ventricles, it puts pressure on the brain that the patient experiences as an extreme headache.

Jaykob exhibited one of the telltale signs of the disorder: sunset eyes, called so because of how they cast downward from the stress being applied to the brain.

The neurosurgery team at CHLA placed a catheter in the brain’s ventricles—a device called a shunt—to drain off the excess fluid and send it down to the abdomen, where it could be reabsorbed into the blood. “Like it ordinarily would,” CHLA neurosurgeon Gordon McComb, MD, says. “But this is sort of a detour.” 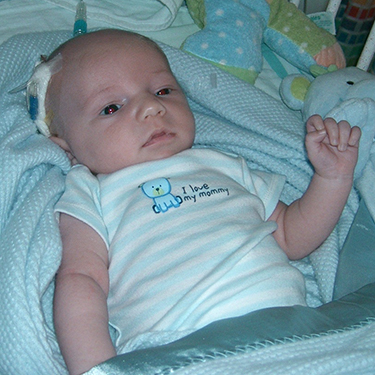 Baby Jaykob in November 2005, after his initial surgery to install a shunt in his brain

That is where Jaykob’s condition remains, with a shunt continuing to draw off the cerebrospinal fluid so that it doesn’t build up in the ventricles.

Hydrocephalus can’t be cured, only managed, and the management of Jaykob’s case has been plagued by hardware trouble, most often due to the same issue with scar tissue growing on the shunt and blocking the flow of spinal fluid. According to his mom, in his 17 years, Jaykob has needed shunt replacement surgery a dozen times.

“The main problem is that the tissue grows into the catheter,” says Dr. McComb, Chief Emeritus of CHLA’s Division of Neurosurgery and Jaykob’s neurosurgeon through October 2021. Once that happens, the catheter is clogged and excess fluid collects.

How does Jaykob know when the shunt is failing? The pressure bearing down on his brain gets translated into severe “hydro headaches,” as Tracy calls them, distinguished from conventional headaches by their resistance to pain relievers.

“He could do the whole Tylenol, Motrin every few hours,” she says. “Nothing will help.”

The headaches are infrequent, often many months apart, but when one comes, it forces Jaykob to determine whether it’s a standard headache that will end, or a hydro headache that indicates the shunt is compromised, necessitating a trip to the hospital. It’s an agonizing decision that usually comes down to the duration of the headache.

“They don't go away,” Tracy says. “Watching him have to make that decision—sorry, I’m going to get emotional now. He's 17. OK, you're hurting. The headache’s there. It's been there for X amount of days. Are you at a point where you can still function in your life like normal? Go to baseball practice, go to school, get your homework done? When you're not, that's when we have to go to the hospital, because if you can't live your life like you normally would, that's not OK.” 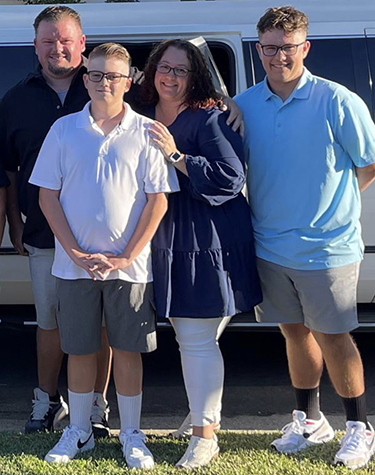 The most recent episode in October 2021 was the worst of them, Tracy says. After nine days of a headache that wouldn’t break, Jaykob went into CHLA on his birthday, Oct. 14.

At the hospital, a nuclear medicine study, neatly called a shuntogram, which injects dye into the shunt to test the flow, indicated an obstruction. The shunt was replaced, but the headache returned days afterward, forcing Jaykob back to CHLA. After a new shunt was installed, a sample of Jaykob’s cerebrospinal fluid collected during the procedure came back positive for bacterial infection.

“That entire series of events was really unexpected,” says neurosurgeon Jason Chu, MD, who had just taken over Jaykob’s case from Dr. McComb.

“He didn't have any of the other symptoms of shunt infections, including fever, neck stiffness, vomiting, malaise. His symptoms were similar to his previous shunt malfunctions. At that point, the suspicion for infection was pretty low.”

A three-week hospital stay ensued. To keep the cerebrospinal fluid flowing while the infection resolved, the shunt had to be externalized. It rested on an IV pole and connected to Jaykob’s brain through a tube inserted into the crown of his head. It was a lot to tolerate for a 16th birthday.

“His whole thing is, ‘I'm done hurting,’” Tracy says. “’I just want the headache gone. I know if I go in and I have surgery, I'm going to wake up and I'm going to feel better and I can move on with my life.’ And that's how he goes about it.”

A slow roller! Past the pitcher! Looks like trouble! The shortstop charges! Picks it up! Throws ... got him!

Tracy has a video of the last out of her son’s no-hitter, but narration is all we can provide. You’ll have to conjure up the images on your own.

Jaykob has shined on the baseball field for years. A star pitcher, he was named first-team All-League last year as a sophomore and was chosen for the Western San Gabriel Valley All-Area team.

“My big dream is to make it to the major leagues, play pro ball, but realistically, hopefully play college ball,” he says. “Then after college, see where it goes from there.”

He’ll continue to live with the effects of hydrocephalus. The headaches disrupt but don’t derail him. “When I was younger the pain was a lot worse. Most of the time it's more of a distraction, but when I don’t feel it, I’m just living my normal life.”

Fortunately, he has not experienced the cognitive damage that the condition often causes. Dr. Chu says Jaykob’s bleed as an infant likely stayed within the ventricles.

“The rest of the brain was spared,” he says. “When the bleeding extends outside the ventricles and into the meat of the brain, the brain gets injured. Jaykob's done great in his overall growth and development. If you met him, you wouldn’t be able to tell he has hydrocephalus and a shunt.”

Jaykob flourishes in school. Even after last year’s hospitalization forced him to miss several weeks, he caught right up. “For the most part, except for teenage laziness, he is at the top of his class,” Tracy says.

She and her husband have been able to move forward as well—not all, but some. They can now get through the day without looming fear. “In the back of my head,” she says, “I'm always wondering, ‘How does he feel?’ But I'm not going to bug him every single day. We just roll with, OK, today's a good day, and keep going.”

A New Treatment for Hydrocephalus 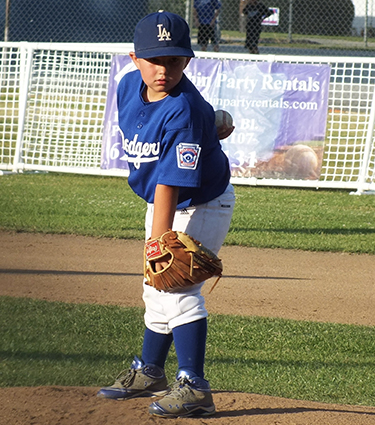 Six-year-old Jaykob eyes his next strikeout

Shunts have been used to treat hydrocephalus for the past 70 years, Children’s Hospital Los Angeles neurosurgeon Jason Chu, MD, says. But as Jaykob’s case illustrates, they are an imperfect solution and vulnerable to malfunction.

“A lot of patients do really well with them, but his story highlights the double-edged sword that shunts present,” Dr. Chu says.

Namely, they are a device with parts, and the only way to treat a defective shunt part is with an operation.

Dr. Chu says that CHLA neurosurgeons are trained in a second, newer treatment for hydrocephalus that avoids a shunt. Called endoscopic third ventriculostomy with choroid plexus cauterization, or ETV+CPC, it’s a two-part operation that creates an alternate pathway—“a bypass channel,” Dr. Chu says—for obstructed spinal fluid to escape the ventricles and find its normal passageway through the brain. In the second part of the surgery, the surgeon cauterizes the choroid plexus, the tissue that generates cerebrospinal fluid, reducing the amount of fluid produced as well as improving the chances the ETV procedure will succeed.

CHLA is at the forefront of research into ETV+CPC as part of a clinical trial funded by the Hydrocephalus Clinical Research Network (HCRN), a network of 14 pediatric neurosurgery centers that includes Children’s Hospital Los Angeles. The trial, titled “Endoscopic Versus Shunt Treatment of Hydrocephalus in Infants,” is evaluating the effectiveness of shunts versus ETV-CPC in infants with hydrocephalus.

“We know that certain types of hydrocephalus can be treated with ETV while others don’t respond as well,” Dr. Chu says. One of the goals of the trial is to find out which types are best suited for this newer option.

“It's still something we're studying and trying to understand,” Dr. Chu says. “If we're able to treat hydrocephalus without needing a shunt, there are a lot of benefits to that.

He then takes a line from fellow CHLA neurosurgeon Gordon McComb, MD. “As Dr. McComb says, you can't have trouble with your shunt if you don't have a shunt.”